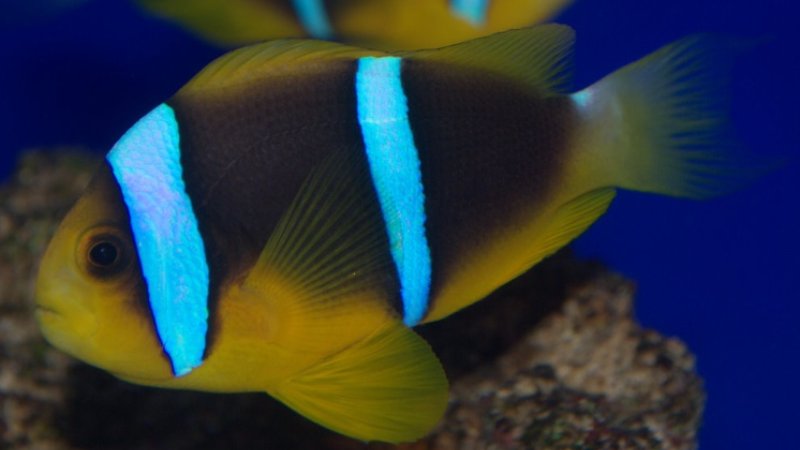 If you are looking for a blue line clownfish blog, then look no further. My blog is the place to go if you want to learn about blue line clownfish. This blog has many useful articles that will teach you everything from the basics of this interesting and beautiful fish.

In my blog, we will discuss all things blue line clownfish and talk about how they are unique among other types of clownfishes, why they are so rare, what makes them so special, and more!

The blue line clownfish is the largest species in its group. Females can grow to 17 cm in length! A chrysopterus is a member of the Clarkii complex and can be easily distinguished as it has electric blue bands. It usually associates itself with sea anemone species such as Heteractis aurora, Heteractis crispa, Heteractis Magnifica, Stichodactyla haddoni, etc.

You can offer a variety of foods to the clownfish, including frozen Mysis shrimp, shellfish, and commercial food pellets. Additionally, they might also feed their hosts if you are keeping them in an anemone or coral.

Because of its wide distribution, this fish lives across the Western Pacific Ocean, from Australia to New Guinea and the Marshall Islands. Another “species”, in addition, is created by hybridization of them with Florida’s orange skunk clownfish, white-bonnet clownfish.

Aquacultured clownfish offer a great advantage over wild-caught specimens. For example, they are less likely to carry disease and adjust more easily to aquarium conditions. Fish bred under captivity also have the potential to be easier to ship, which makes them that much better. Purchasing aquacultured fish supports marine life farms, so it makes your interest become more sustainable.

One of the most challenging clownfishes to keep

Blue Stripe Clownfish are less popular among aquarium hobbyists because they are harder to keep as pets. However, we can do more to make them suitable for captivity.

In the tank, the blue striped anemonefish is often impacted by shipping and Brookiella, making it difficult for it to survive in a captive environment.

Despite all odds, Blue Line Clownfish make a wonderful pet. There are many ways to avoid Transport stress and Brooklynella outbreaks that happen so often and if you can get past them, then these fish really do turn out great!

Blue stripe clownfish are easier to maintain in captivity when they are healthy. Spawning them is difficult, which is why larger tanks with anemones work better than small containers.

Captive-bred clownfish are easily bred in the aquarium. Adult females tend to be the biggest of the pair, and they will stay close to the other. Egg layers will deposit their eggs on a flat surface and defend them vigorously from other tank mates. Newborns must be cared for in a separate aquarium and fed rotifers and baby brine

Captive-bred blue striped clownfish are hardy with large size. They can grow to seven inches and do best in at least a 50-gallon tank that contains other fish or an anemone. Their diet mostly consists of meaty food items and herbivores preparations.

Shipping stress and what might be the tank’s greatest threat, captive breeding, are not usually enough to keep aquarists from Blue Striped Clownfish. What if we considered smaller fish as an option? Though they fare better in captivity when they’re young, juvenile reef fishes tend to be less expensive than adult ones.

Once again, the blue stripe clownfish falls short – even if juveniles are predisposed to do well on a journey from their habitat to our homes, they lack desirable coloration. That’s right; juvenile Blue Stripes are medium brown in tint and have few distinguishing markings, making them among the least attractive in their class. This exactly is the reason why they are not be collected and sold.

Due to the difficulty in finding these fish, their prices are often higher due not only to the cost of catching them but also because vendors for whatever reason (likely vendor logistics) give these fish more space on boats compared to other fish. Fish like the Blue Line Clownfish are rarely imported because of their difficulty to take care of as adults and difficult reputation, leaving most aquarists ignorant about its existence.

What is the blue line clownfish?

The blue stripe anemonefish is a unique type of clownfish that makes its home with several different types of sea anemones. It has a distinctive glittering blue line and yellow dorsal fin, making it among the most popular in-home aquarium fish.

Can blue line clownfish be kept in a tank?

Yes, they do can. Captive-bred and raised blue line clownfish are more likely to adjust easily to aquarium life, they carry less disease, and they also better tolerate shipping stress.

Which aquarium is suitable for blue striped fish?

For The fry, they must be raised in a separate aquarium on a different diet. On the other hand, Adult female Blue Striped Clownfish should be kept in a tank with a large of 50 gallons up.
Compared to its closest relatives, the blue stripe anemonefish is better suited for a larger tank (>55 gallons). It may be housed with other more aggressive fish as it is robust and bold. It also happens to be the largest clownfish species; females can reach up to 17 cm in length!

Because juvenile Blue Stripes are medium brown in tint and have few distinguishing markings which make they are among the least attractive in their class.

Can clownfish live without an anemone?

Yes, They can live well in the home tank without anemones. Domestic fish tanks are different from the ocean in that there may not be predators, so clownfish do not need protection from anemones. But this is not true of clownfish living in the wild; here, they rely on anemones for protection against predators.

In conclusion, Blue Line Clownfish are unique and beautiful fish. However, in order to keep them in our house, you have to take special care.

Hope my blog is informative and interesting for you. Thanks for reading, and wish you could raise Blue striped fish successfully in an aquarium.