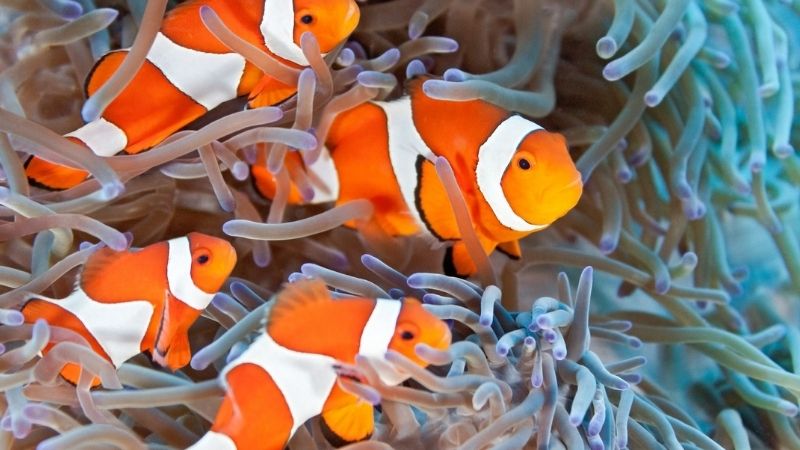 School Of Clownfish: At the time I bought my first clownfish home, I feel like I can get a school of them. But it’s not easy like I think. My friend said that I had to research it because not all clownfish like to live together. So after I spend almost 1 day researching the information on the internet and some forum, I can consume this article. I hope it can help some of you to find out the problem!

Unfortunately, clownfish do not school in the wild. I believe that when they are younger, they stay in family groups together; however as they mature and grow older, dominant females kick them out of the area and force them to either create their own group or join a female elsewhere.

Clownfish pair with the same mate their entire life. They do not school and stay within one anemone for their lifetime in the wild which makes them a great fish to keep as pets!

Do Clownfish Live Alone Or In Groups?

Clownfish live in groups of a dominant female and smaller male whom she pairs for life, with subordinate non-breeding males comprising the rest of her group. If the female dies or is removed, one of the males will change sex to become the new dominant female.

You can keep different species of clownfish together – provided you have a large enough tank to give each fish adequate space to swim and explore. If confined to a small tank, larger clowns may bully or attack the smaller ones.

Clownfish live in groups consisting of one female and a smaller male with whom she pairs for life. They can be successfully kept as pairs, but squabbling may occur. In larger tanks, it’s possible to maintain them effectively as a group.

How Many Clownfish Can We Add To New 210 Gallon?

We are establishing a 210-gallon aquarium. The general rule is that you should never have more than two clownfish in one tank.

While it seems like a general rule, if the tank were 10,000 gallons there would be plenty of room for many more clownfish. There are exceptions to this rule too. For example, depending on the size of the tank some people may have only one or two fish in their tanks.

We currently have no fish in the aquarium as it is doing its first period of time. However, we would like to have 3 anemones in the tank that host 3 different kinds of mated-pair clownfish under strong T5/LED lighting.

If we add them all at the same time, would that be possible? Ideally, I’d like to get a true percula, two black clowns, and a Clarkii or Two-band.

Clownfish can live alone or in pairs. However, more than 2 clownfish are not advised.

How many females are in a school of clownfish?

Clownfish, also known as anemonefish, are sequential hermaphrodites that first develop into males and live in a regimented school made up of all males and the lone female who is generally the largest fish.

Why is it called clownfish?

Clown anemonefish are orange with three white stripes. They live inside sea anemones and reach 4.3 inches in length.

What happens if a female clownfish dies?

Clownfish are born male and can become female if the dominant male dies. These fish keep in mind that this transformation is irreversible.

This article above show you if clownfish is school or not! We hope it can help you to find out your problem.