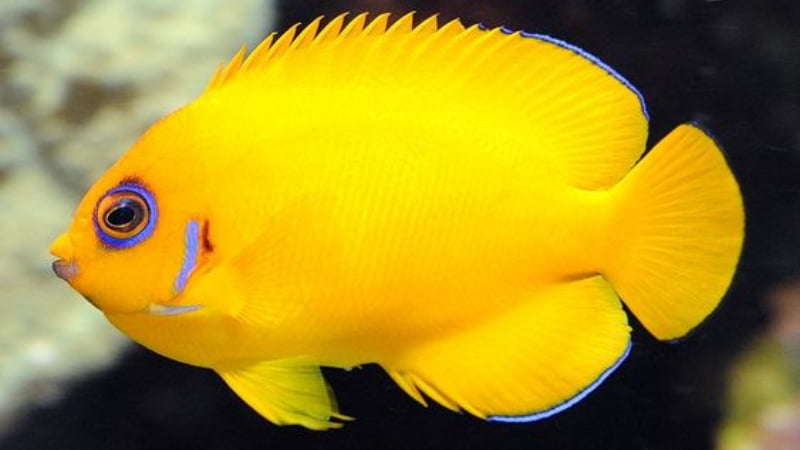 A saltwater aquarium is the best place to look for dwarf angelfish, and the lemonpeel angelfish is without a doubt one of the gorgeous dwarf angelfish you will find there. Thanks to the superb coloration mixture, it draws attention to any aquarium.

In this post, I am going to discuss the lemonpeel dwarf angelfish, including their habitat, size, longevity, aggressiveness, and much other information.

These fish are native to the Indo-Pacific area; nevertheless, it has been documented that a number of these fish are found in the reef in Kaneohe Bay on Oahu, Hawaii. Hawaiian angelfish are not an indigenous species to the Hawaiian Islands. Therefore, it is thought that the appearance of Hawaiian angelfish in Hawaii is attributable to the illegal release of unwanted aquarium creatures into nearshore seas.

The Lemonpeel Angelfish has a body that is short and elongated oval-shaped, and its fins are rounded in form. This is the normal shape for a dwarf species. If they are well taken care of, they may reach a maximum length of 5.5 inches (14 cm) and can live in an aquarium for around 11 years.

These dwarf angelfish are normally a brilliant yellow color, and their gill covers have a line that is blue and black in color. Additionally, some of their fins have blue edging, and some individuals even have blue color on their lips. Specimens that originated in the Pacific Ocean also own a blue circle around the eye. The absence of this eye ring in specimens that originated in the Indian Ocean has given rise to the hypothesis that these specimens belong to a distinct species.

Juveniles have the same color as adults, but in addition, they have an ocellus, also known as an eyespot, on either side of their head. They appear as huge black dots with a blue rim and are positioned in the body’s midsection.

Often, lemonpeel dwarf angelfish cross breed with C.vrolikis (Pearlscale Angelfish), which have the advantage of being hardier.

The Lemonpeel Dwarf Angelfish is a fish that may be kept successfully with some effort. Both the water’s quality and the storage capacity are essential. Keep in mind that these angelfish are continual grazers, and much like tangs, plenty of food means lots of bio load. Thus, it is imperative that the water quality be checked.

They need an environment with a pH of at least 8.0 and regular water changes that do not involve the removal of algae from rocks. If the tank is between 55 and 60 gallons, it is recommended that you replace 10–15 percent of the water in it every other week. If your tank is larger than 100 gallons, you should consider doing a 20 percent water change about every 3 weeks.

They will perform well in a normal reef environment that has lots of places to hide and contains living rocks. In order to provide your angelfish with all of the algae they need for food, the aquarium has to be at least six months old. It is also useful to have patches of debris for the algae to grow on, as this will assist in the process of providing the required vegetables for your fish.

The lemonpeel dwarf angelfish like to be alone and stay close to shelter. It will behave aggressively against other types of angelfish. Two males will engage in a fight to the death.

It is possible to keep a female and male pair or even a trio (one male and two females) of lemonpeel dwarf angelfish in the same tank if the aquarium is large enough and has plenty of places for them to hide. However, they should be introduced to the aquarium at the same time.

This species is well-known for its habit of nibbling and selecting prey off large-polyped stony corals and tridacnid clam mantles. In addition to picking at zoanthids, the lemonpeel dwarf angelfish may also consume mushy coral polyps.

As a result, if these invertebrates are present, this fish, like the vast majority of angelfish, cannot be completely trusted. Dwarf angels are very territorial, and as a result, they will choose tank mates who are considerably less aggressive and smaller in size.

The Lemonpeel Dwarf Angelfish, like other species in its genus, is a solitary fish that prefers to remain close to its shelter. Because it is hostile toward other fish that belong to the same genus, it must be maintained alone in a tank that is at least 55 gallons in size. In an aquarium with a capacity of 75 to 100 gallons, they may be housed as a male and female couple or in a small harem of their own kind. However, you should note that there will be a battle to the death between two guys.

These fish have a strong sense of territory, and they may attack less aggressive or smaller tankmates. When stocking a tank, dwarf angelfish should be the very last fish introduced. It is not recommended to keep them in reef tanks since they will nibble and pick at corals, clams, and other sessile invertebrates. Even while it is generally true that Lemonpeel Angels do not bother cnidarians, there is still a 50/50 chance that they may do so.

One of the easiest methods to get a pair is to group together larger and smaller fish. This will work in two to three months. However, you should maintain awareness at all times and be on the lookout for aggressive behavior.

Spirulina, marine algae, high-quality preparations, mysis or frozen shrimp, and other meaty items should all be included in the diet of the Lemonpeel Angelfish. The diet of this angelfish must consist of a greater amount of algae and seaweed than most angels.

The lemonpeel angelfish is a member of the omnivore family; nevertheless, the majority of its diet consists of algae. This particular kind of angelfish does not adjust quite as quickly to the foods that are provided in the aquarium, which makes it somewhat more challenging to care for.

The lemonpeel dwarf angelfish should only be introduced into an aquarium that is already well established and has a sufficient amount of live rock for grazing or an aquarium that has a strong healthy population of macroalgae growth and diatoms to feed on.

The presence of such an environment encourages the fish’s natural eating instincts, and with patience and persuasion. It will frequently start taking a significant amount of tank-fed meals that are suitable for omnivores.

When one fish observes that other fish are feeding on a certain kind of food, this fish will often begin to consume that same type of food as well. They should be fed two to three times a day, and there should be a lot of food available for them. Also, you can provide them with prepared meals with marine algae, meals enhanced with spirulina, mysis shrimp, shaved shrimp, and brine shrimp as a source of nutrition.

Every species of dwarf angelfish is a broadcast spawner, meaning that they all produce eggs and sperm at the same time. After performing their mating dance, they ascend into the water column, where they deposit their eggs and sperm.

In the marine aquariums kept by hobbyists, Lemonpeel Angelfish reproduce on a consistent basis; nevertheless, this is often where the progress usually ends. They are incredibly challenging to reproduce in captivity effectively. They are most comfortable in warmer water, particularly while they are spawning, which necessitates the presence of high-quality water as well as nutritious food for the developing larvae.

To stimulate spawning, you will need a tank that is both bigger and deeper, as well as a consistent lighting schedule. In order to mimic nature’s natural dusk light cycle, you should have 1/2 of your aquarium’s lights go out (brighter lights) and then, an hour later, the other 1/2 (actinic lights) go out. This should be done at the same time every day. In order for them to be able to rise to the surface and spawn, they need a tank height of at least 20 inches and a temperature of 79 to 83 degrees Fahrenheit (26 to 28 degrees Celsius) for 14 to 16 hours each day.

The planktonic eggs will hatch in little less than 24 hours, and after they have hatched, the larvae will need tiny algae for their extremely small mouths (within 24 to 36 hours after hatching).

Due to the complexity of caring for these babies, much preparation is required. The larvae are exclusively responsive to certain types of live meals. It has been discovered that they will not consume rotifers, and baby brine shrimp are just too large for them to consume, but it has been reported that they will consume copepods.

Video: All About The Lemon Peel Angel

This species is widely recognized for feeding on large-polyp stony corals as well as the mantles of tridacnid clams. The lemonpeel angelfish could also nibble on zoanthids and soft coral polyps. Additionally, it might consume soft coral polyps. Hence, if there are any of these invertebrates present, it is impossible to put total trust in this fish, as is the case with the vast majority of angelfish.

What are the diets of Lemonpeel Angelfish?

Although it consumes a variety of foods, the lemonpeel angelfish’s diet is largely made up of algae. This particular kind of angelfish does not adjust nearly as rapidly to the meals that are provided in the aquarium; as a result, maintaining one of these fish might be quite challenging.

What is the life span of a lemonpeel angelfish?

The lifetime of a lemonpeel dwarf angelfish typically ranges from five to ten years. Those that are reared in confined spaces like tanks and aquariums often live longer if the necessary maintenance is performed.

How cute are lemonpeel dwarf angelfish?

They are undeniably adorable and lovely marine animals. They are one of the cutest and most interesting-looking dwarf fish in the world. People find them appealing due to the striking contrast between their yellowish blue and yellowish green colors and their small size.

Why were lemonpeel angelfish named that?

The scientific name for this creature is Centropyge, which comes from a mixture of two Greek words: “kentron”, which means “sting,” and “pyge”, which means “tail.” The scientific name for this species is Flavissima, which translates to “bright yellow.” Because of their coloration, which is similar to that of a brilliant yellow lemonpeel, they are also referred to as lemonpeel angelfish.