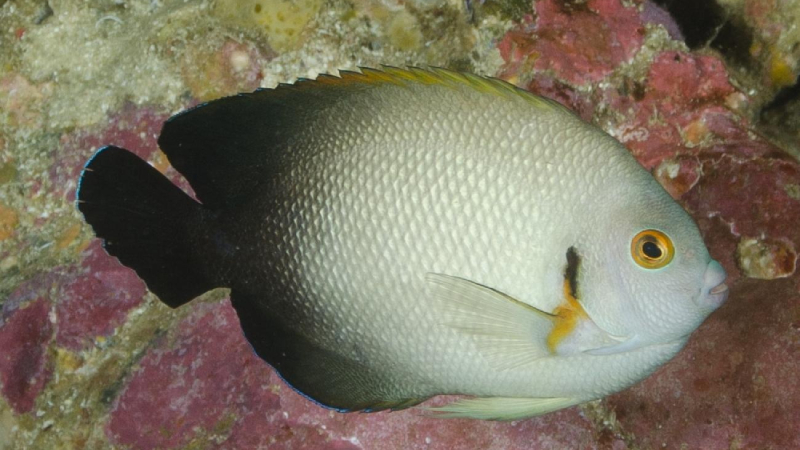 The Half Black Dwarf Angelfish (also called “Centropyge vroliki”), like its name, is half black and half pearled in coloration. Besides this unique characteristic, they are not as aggressive as other fish, which makes them an excellent addition to any reef tank.

Therefore, do you want to add a half-black dwarf angelfish to your home aquarium? In this article, I’ll show you all you need to know about this fish, from where it lives to how to care for it in the tank so that you may raise it successfully.

Its range goes from Lord Howe Island in the south to Christmas Island in the west and Vanuatu, the Marshall Islands in the east, and Taiwan in the north. It can also be found off the coast of northwestern Western Australia, in the northern parts of the Great Barrier Reef in Queensland, and on the south the central coast of New South Wales.

Half black dwarf angelfish is found between the depths of 1 and 25 meters (3.3 and 82.0 feet). This species lives in lagoons and reefs near the sea, most often in places with a lot of coral growth. They commonly inhabit places with a rock or rubble bottom, especially where there are many different kinds of algae and sponges.

This species can change gender from female to male. In harems without males, one female changes her gender.

Half Black Angelfish may be identified by the orange ring that surrounds the eye, the orange blotch in the center of the back of the gill cover, and the yellowish accents on the pectoral and front half of the dorsal fins.

Due to the fact that Half Black Angelfish are widely renowned for their ability to cross-breed with Eibli and Lemonpeel angelfish, the hobby sometimes comes across some stunning and fascinating hybrids.

In their native environment, Half Black angelfish eat algae and tiny crustaceans hiding in the algae. The diet of juveniles is mostly composed of plankton, but as they mature into adults, they begin to consume more microalgae as well as crustaceans.

In an aquarium environment that is very well established and has plenty of cured live rock, half black dwarf angelfish are good eaters. They can eat leafy greens, spirulina flakes, frozen Mysis shrimp, omnivore pellets, and other meaty crustaceans such as clams and shrimp. Two to three times a day is the recommended frequency of feeding.

Juveniles are thought to be quite safe for reef tanks, but as they mature, they may acquire a desire for brain corals, soft coral polyps, zoanthids, and clam mantles. Keeping them properly fed will, in most cases, prevent this issue from occurring. The Half Black Angelfish will not annoy any crabs or shrimp that are living in the reef tank with them.

With a tank giving sufficient area for Half black dwarf angelfish to move about, they are typically peaceful and well-behaved in a communal environment. However, if they are restricted in a small space, they tend to become combative and hostile, particularly against other members of their own species and fish that are visually similar to themselves.

When kept alongside bigger or more aggressive fish and subjected to bullying, Half Black Dwarf Angelfish soon become submissive, sluggish, and may even behave in a more peaceful manner. When there are more than one dwarf angelfish in the same aquarium, it is preferable to keep them in a tank that has lots of area for swimming and live rock that has been organized into spots where they can rapidly hide.

It is possible to keep a single juvenile Half Black Dwarf Angelfish in an aquarium with a capacity of 30 gallons that has been “aged.” However, the fish will do much better in an aquarium with a capacity of at least 55 gallons or even a larger one; this is especially true if you plan to keep a mated pair of this species. An “aged aquarium” should be at least six months old and have a significant development of algae in order to provide the appropriate food for your angelfish to eat.

To ensure the fish’s health, an aquascaped reef with huge amounts of cured live rock organized into sheltered areas, archways, overhangs, and hiding spots is important. Because they are persistent grazers, the adult Half Black Angelfish are not completely “reef safe” because they will progressively eat away at part of the reef structure. It is common for them to eat polyps, soft corals, and clam mantles if they are not fed correctly.

Regulated water changes are necessary to ensure the health of Half black dwarf angelfish. A 10% to 15% biweekly water change is suggested for aquariums 55-65 gallons in size. Half Black Angelfish are voracious grazers; thus, cleaning the tank of algae should not be part of routine water changes.

Even though the Half Black Angelfish have been successfully grown in an aquarium setting, it is quite challenging to successfully rear their larvae. All angelfish begin life as females, but as they mature and become more dominant, the dominant fish will change gender into males.

The easiest way to get a matched couple is to keep a group of juveniles together. Usually, it takes 2 or 3 months for a female to turn into a male and pair up with another female.

. A pair of Half Black Dwarf Angelfish may be created by buying a bigger fish and pairing it with a smaller one. Male and female identities are often established within a few months after birth. Their mating process is quite similar to that of the Lemonpeel Angelfish, which they often cross-breed with in the wild.

It is generally known that the Centropyge vroliki is able to successfully reproduce with the Centropyge eibli (Eibli Angel) and the Centropyge flavissima (Lemonpeel Angel). Both of which are suitable tank mates if they are introduced to the aquarium at the same time.

Video: All About The Half Black Angelfish

What is the life span of a half black dwarf angelfish?

Half-black angelfish have the potential to survive for up to ten years if they are kept in an aquarium of an appropriate size and given an adequate amount of care.

What is the half black dwarf angelfish’s conservation status?

On the Red List of Threatened Species maintained by the International Union for the Conservation of Nature (IUCN), the half black angelfish (Centropyge vroliki) is classified as a species of Least Concern.
This classification indicates that the population of this fish is currently stable all over the world and that its natural habitat is not in any danger.

What is the swimming speed of a Half Black Dwarf Angelfish?

Although angelfish are often thought of as being sluggish swimmers, the half black angelfish is really quite a bit quicker than its counterparts, owing to the fact that it is significantly smaller.