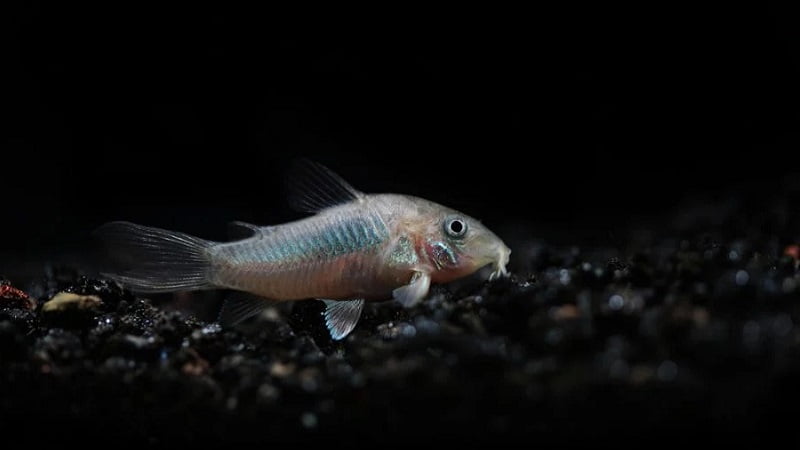 Your cory catfish may suffer from tail and fin injuries that seem dramatic and painful, but they can heal and regrow their tails in most cases. Aside from the external injuries, a cory catfish missing tail can be caused by bacterial or fungal infections. Therefore, knowing the signs of fin complications is imperative as you can intervene timely, supporting the recovery of your catfish.

This article will include two causes of tail missing in cory catfish. Also, I will demonstrate the general treatment and prevention for you to deal with the problems of cory catfish missing tail.

Your Cory Catfish Missing Tail: Why?

Your cory catfish can be injured in a variety of ways, which ends up getting their tail ripped off. Some of the external factors that physically cause injured fins, leading to cory catfish missing tail issue, include: handling them in a net, sharp-edged tank decorations, fighting or fin-nipping by aggressive fish mates.

Fins or tails that have been damaged will usually show a clean split or bite-size pieces missing. Generally, your catfish don’t seem to be affected by such physical and minor injuries unless they are repeated or lead to further serious damage, such as fin rot.

Fin rots can occur from bacterial infections (Pseudomonas fluorescens, causing fish fins to be ragged rotting), or from fungal infections (which rot the fin more evenly and cause a white edge). These two types of infections can sometimes coexist. Most of the time, catfish fin rot is a secondary infection from a catfish disease like Columnaris or Hemorrhagic Septicemia.

Fin rot destroys a fish’s fins from the base to the tip. Damaged fins often display a ragged, fuzzy edge due to fin rot. It begins at the edge of the fins and continues to destroy more and more tissue until the base is reached. Once it reaches the fin base, the fish will be unable to reproduce lost tissues. At this serious stage, the rot will spread over the fish’s body, which is also called advanced fin and body rot.

Though bacterial infection is the direct cause of fin rot, some environmental stressors may be the indirect cause, such as poor water quality, which lowered the fish’s immune system enough to allow bacteria to take over.

If you notice that your cory catfish missing tails is because of fin or tail nipping, you should move the threatening fish to another tank. You may also want to adjust the tank decoration, like removing the sharp rocks or wood roots, to protect your cory catfish from being injured when accidentally bumping into these things.

When it is because of the fin rot, you should treat them immediately with anti-bacterial medicines such as antibiotics or aquarium salt. Before starting the treatment, it is also important to separate your catfish with fin rot to avoid the infection spreading to the entire tank.

Keep your cory catfish in a quarantine tank for treatment and remember to maintain the clean and best water environments in this tank to allow your fish to recover quickly and stimulate the effectiveness of the treatment.

Your cory catfish will be able to heal and get their tails or fins grown back if you spot the symptoms early and provide them suitable treatment timely.

The best plan for preventing cory catfish missing tail from occurring is to provide healthy and clean water environments while trying to eliminate other stressors factors.

The fin rot disease is contagious, like many other diseases of freshwater fish. Gram-negative bacteria are often responsible for causing it.
A slime layer hides the outer membrane of this type of bacteria, making it quite dangerous. Therefore, it is easy for bacteria to spread. Through physical contact with the infected fish, your aquarium’s other fish can contract this disease.

When fin rot is caught early, it can be treated, and your fish’s tail or fin will slowly grow back over time, in a clean hospital tank. However, in more severe cases, when the fin rot has attacked the fish’s body, the tissue cannot be repaired.

How do you know if fin rot on catfish is healing?

Your catfish’s fin will start growing again once the localized infection has been cleared. At this stage, you will notice clear or white tissue around their tail, which indicates newly-generated skin. Meanwhile, when there is still red tissue on their fins or tails, this is a sign of continuous infection, meaning that your fish need further treatment.

You may be aware of why your cory catfish lost their tail after reading this article. Then, the matter is to prevent the cory catfish from losing their tail completely. The rule of thumb for this is to keep the best living condition and a clean water tank. Some of the essential actions you can take include changing 15-20% water content, ensuring appropriate pH, water temperature, and zero ammonia, and avoiding overcrowding and aggressive partner for your cory catfish.

Such approaches are to help eliminate or at least reduce the stressing factors impacting your catfish. Hope you find this helpful to deal with your cory catfish missing tail problem.