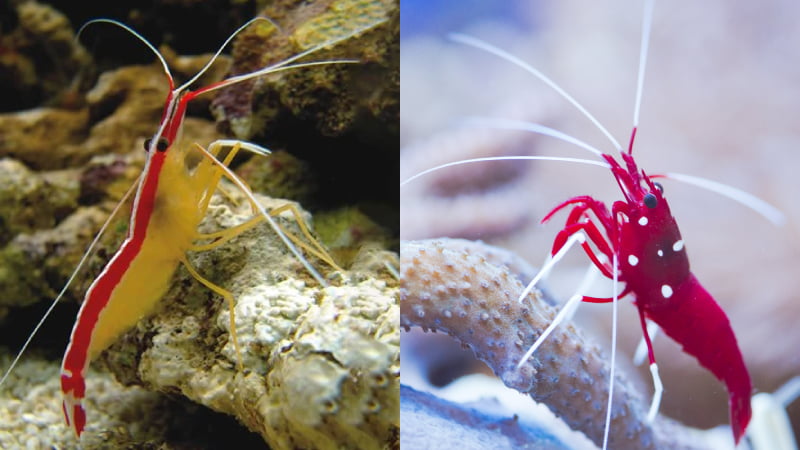 A wide variety of shrimp can be a great addition to any aquarium. You can use them to keep your aquarium clean, or you can use them to have a more pleasing appearance. If, however, you are planning to add more than 1 shrimp to your tank, you should make sure that those shrimp species will get along well with each other.

This article will point out a few characteristics of these two types of shrimp to see if the fire shrimp is a good tankmate for cleaner shrimp.

The red colored shell of the fire shrimp gives the shrimp an even more beautiful appearance that resembles the red of fire.

‘Cleaner shrimp’ is the common name given to a diversity of shrimp species known for their aggressive cleaning behaviours. I believe that the most prevalent type of shrimp is known as the scarlet skunk shrimp, which have spots of red on their translucent bodies. It is a very beautiful shrimp, but it is not as striking as fire shrimp.

The size of both breeds tends to be around the same. In terms of size, they can be around 2 inches long, so a bit bigger than other shrimps such as ghost shrimps.

I would say that both types of shrimp are pretty nonaggressive in general. It has never occurred to me that any of them attempted to attack their fellow tankmates or each other. As you may already know, both of them belong to the Lystmata species, which means they are sort of related in some way.

Most of the time, fire shrimp hide in the back of the tank while cleaner shrimp are busy cleaning the tank or looking for food.

Both species can be kept in the same tank without any problems due to their non-aggressive behavior.

Fire shrimp prefer to hide. Because their natural habitat is deep caverns, they are accustomed to staying in there for extended periods of time. Feeding them more frequently is the greatest method to get them out in the open. They’re still drawn to you, and if you’re lucky, they’ll eat from your hand.

The cleaner shrimp comes out on top in terms of cleaning. They’re a hardworking crew which constantly seem to be hungry. Because they’re so energetic and chaotic, some owners believe they’re mentally ill. Cleaner shrimps are more entertaining to watch regardless of how you perceive their behavior.

If you have corals in your tank, however, there may be concerns because the cleaner shrimp will ‘steal’ coral food. If this is an issue for you, here are two solutions to consider.

Before you feed the corals, shoo the shrimps away. However, this may enrage your cleaners.

Cut the tops off two trash bottles and place them over the coral to create a coral dome. Feed food straight into the coral dome using a turkey baster to keep the shrimps away.

When you have aggressive fish swimming in the tank, you should expect both species to become more ‘shy’ and more often hide in their caves.

The price for both breeds is also about the same. A long time ago, it was more expensive to purchase a fire shrimp (it was in the $40 range) but it seems the pricing has gone down a bit.

Neither fire shrimp nor cleaner shrimp have a problem living in both large and small aquariums.  When a tank is properly cycled, the species should be very easy to handle as a breed.

One thing to keep in mind with fire shrimp is that, as a result of their deep-water characteristics, they are more sensitive to light. Having too bright aquarium lights will likely make them hide even more as they will be even harder to see.

In terms of the ability to survive changes in the perimeter of the water, cleaner shrimp are more resistant. That doesn’t mean the fire shrimp are unable to withstand pH, gH or nitrate increases; they can still tolerate them.

It is estimated that cleaner shrimp live for around 3 years on average. A fire shrimp can live for a period of 2 to 3 years.

Can You Breed Cleaner Shrimp And Fire Shrimp Together?

If you are considering keeping both and are concerned if they will conflict with each other, you are likely to find that the answer is no. Both shrimps are fairly peaceful, and therefore, if they were to live in the same tank, they would probably get along fine.

Can a cleaner shrimp and pistol shrimp live together?

As long as they each have their own territory, cleaner shrimp and pistol shrimp can live together.

What fish cleaner shrimp can’t be keep together?

You can keep multiple Skunk Cleaner Shrimps in the tank if you wish, but you shouldn’t keep them with more aggressive fish species like Hawkfish, Lionfish or Triggerfish because they may attack them.

Blood Red Fire Shrimps act as a “cleaners shrimp” removing dead tissue and parasites from fish that present themselves.

In case it’s difficult to decide which shrimp variety to keep, here are some general recommendations: cleaner shrimp work harder and are fun to watch. Fire shrimp are more beautiful though they hide most of the time. They also clean less than cleaner shrimp

Although there are some differences, these two shrimp species can completely coexist in harmony. Breed cleaner shrimp and fire shrimp together is a great combination.