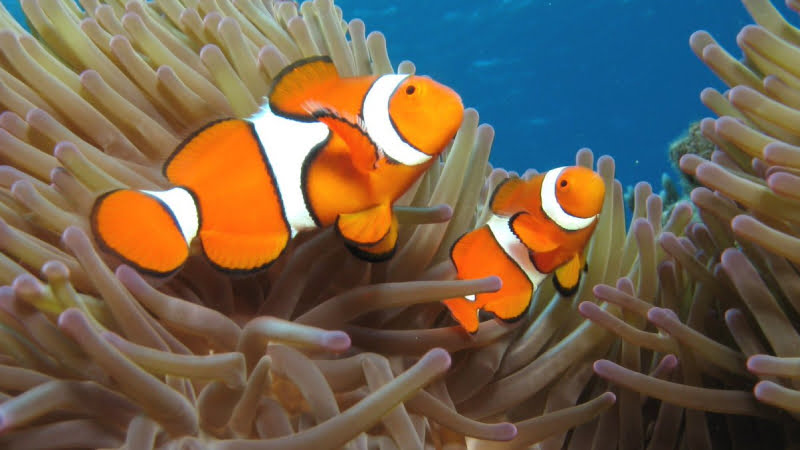 The anemonefish is a gender-bending marvel. It starts out as a male but can switch to female when circumstances allow, for example, when the only female present dies or disappears. The other way around, can a female clownfish turn into a male?

I am a fish ower and I have researched further information in the Internet. So, in this article I will answer the question “can a female clownfish turn into a male” and when they change gender.

Can A Female Clownfish Turn Into A Male?

Females cannot change to males. Males, however, can change to females in some cases. If there are two female clownfish (and by 2.5 inches it should have changed), one will kill the other eventually.

Clownfish follow a strict hierarchy in nature. All are born as males, but the most dominant one will become a female. If the female should die, the dominant male becomes a female. There is no reason for the female to become male…there are many more males waiting in the ranks for dominance.

When Do Clownfish Change Gender?

Clownfish live in small groups inhabiting a single anemone. The group consists of a breeding pair, which cohabits with a few non-reproductive, “pre-pubescent”, and smaller male clownfish.

In the female-dominated clownfish community, the female is the largest fish. She mates only with the breeding male, usually the second-largest and most aggressive male in the community. The rest of the community is made up of sexually immature males.

Clownfish carry both female and male reproductive organs. When the female dies, the breeding male has priority in choosing food and begins to gain weight, eventually becoming female. She will then choose a breeding partner among the available males. The chosen male is usually the largest and most aggressive of all of them. The two will pair off and breed together until one of two dies, at which point the cycle begins again.

Size Does Matter To Sex Of Clownfish

In the clownfish world, size does matter. For clownfish, the females are larger than the males. When you have a large clownfish or a clownfish that has been alone for many months, it is probably female.

Female clownfish are much more dominant than males. The females go after any food that makes it into the tank, which is one reason the males don’t grow as large. They will often aggressively protect their “home”, whether that be an anemone, a nesting site, a clay pot, or the entire fish tank. If a clownfish is aggressive to your hand when you are trying to clean the tank or it won’t let any other fish near its spot, it most likely is female.

Yes, clownfish species are hermaphrodites. When the female dies, the dominant male changes sex and becomes the female. This life-history strategy is known as sequential hermaphroditism.

Does size matter to the sex of Clownfish?

In these groups, the status of an individual is determined by its size. The largest of the group is the breeding female, followed in size by the breeding male, with the remaining non-breeds getting smaller as their rank decreases.

How long does it take for a clownfish to change gender?

When the female dies, the breeding male will get first choice of food and begin to gain weight, eventually becoming female. This lasts around 3 to 4 weeks for a clownfish to change gender.

I hope my article had answered your question regarding whether or not a female clownfish turn into a male.

Clownfish are by far one of the most popular species of fish for marine aquarists. I hope I’ve inspired you to keep one of these fantastic designer species Clownfish in your aquarium.