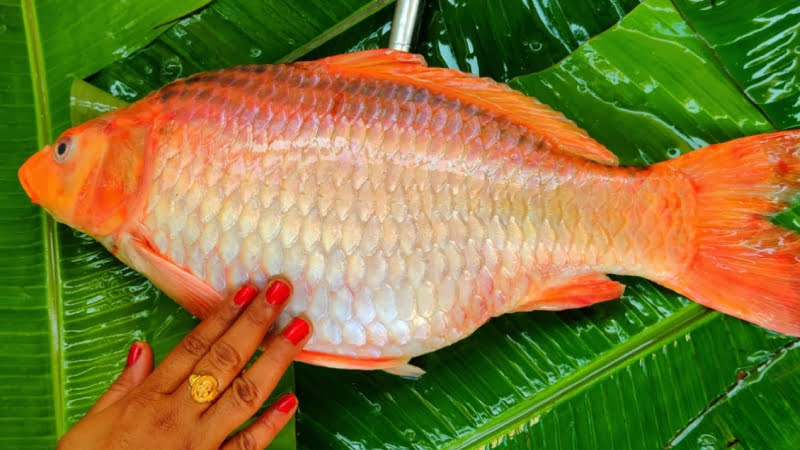 Can we eat goldfish? Are goldfish edible? I would hope that this goes without saying, but regardless of what the answer is, you should never eat your goldfish pet, no matter what it is! The problem with this is not only that it is cruel, but, as you will discover below, it is also pointless, and goldfish typically do not taste very good.

Nevertheless, people often search for the answer to this question on Google or internet forums in order to find an answer. The majority of the time, they’re just curious, as opposed to actually intending to eat their pets (although there have been some reports of goldfish being swallowed by people). There have also been people who have asked us about eating wild goldfish that have been caught.

Considering that goldfish are a relative of carp, and carp has been a food source for many years, it stands to reason that goldfish are also edible. It’s also important to take into account that this suggests that the taste might be a bit strange, at the very least. It is common to find carp with a “muddy” flavor, especially when it is not prepared properly.

It would be challenging to get a meal of goldfish from a single goldfish since they are small and bony, which makes them difficult to eat.

Last but not least, in our opinion, one of the important reasons you should not eat a goldfish is that they are animals that are kept as pets. Therefore, they should rather be cared for and enjoyed, rather than eaten.

The next part of this post will give you more details about this.

The idea of humans eating goldfish has been our main focus so far. Now, one may wonder if we should include other pets such as cats or birds in the discussion.

I would say that the answer here is basically the same. The answer is yes, a cat can eat goldfish, but you don’t want to let them do it.

It’s true that cats might not be as fussy about taste as humans, but there are lots of other healthier and cheaper alternatives to goldfish available for them. I strongly recommend that if you have a cat, you get an aquarium lid that fits securely to keep your goldfish safe and secure.

In the same way, you will need to protect your goldfish from wild animals if you keep them in a pond. One way to do this is by covering the pond with netting.

How Does Goldfish Taste?

The goldfish will taste like the pellets or flakes you give them if they are used to just eating them.

A muddy-tasting goldfish on the other hand has been described as having a taste similar to that of a wild goldfish.

This is a fish with an extremely bony structure. This would require a lot of time and skilled hands in order for them to be deboned.

The following are comments from many people about the taste of this fish:

In addition, the question of whether one should eat goldfish has been asked by a number of people in the past.

Those of you who are still pondering the question, “Can you eat goldfish?” may want to consider the following reasons why you should not eat goldfish:

If you’ve been feeding your goldfish pellets and gross flakes, then that’s what it’s most likely going to taste like. And we know all too well that the taste of fish flakes or pellets is not pleasant!

What about wild goldfish?

If you are seriously looking to eat a goldfish, the best option would be to catch one in the wild. Goldfish in the wild can grow to a weight of more than thirty pounds.

You will be able to find them in rivers and lakes as either wild populations or former pets. However, even if it was your best choice, you probably wouldn’t like it either.

As in the case of carp, goldfish also prefer to swim in shallow water, and their taste is similar to that of the water in which they swim. The taste of detritus and mud will probably remain strong even after the fish has been cooked.

In addition, goldfish carry many types of harmful bacteria that can be transmitted from fish to people. Whether the fish is consumed raw or cooked, these harmful bacteria can still be transmitted from fish to people. It is therefore important to think very carefully before eating a goldfish. Although they are not particularly tasty, nor healthy, nor are they even very safe for consumption-is it really worth it just to try one?

Too Much Effort With Little Gain

Another reason goldfish do not make good meals is that they tend to be smaller than their carp relatives—except for the largest goldfish. Consequently, if you try to debone and prepare a goldfish, it will take a considerable amount of time for a very small amount of meat. Therefore, it would be a waste of time, effort, and money in most cases.

How Do I Cook Goldfish?

If you insist on eating goldfish, then I suggest at least cooking it before you eat it. If you wish to improve the taste of the goldfish, you can season it thoroughly before eating it.

Wild goldfish are believed to acquire the unpleasant taste as a result of the stress that they acquire from being dragged out of the water and left to die. According to the fisher, he may be able to avoid the taste of the fish if he kills the fish as quickly as possible.

Make sure that you clean, descale, and debone the goldfish thoroughly before cooking it. A lot of effort has to be put into cleaning and preparing the fish because of its small size.

If you wish to fry it, you can add a generous amount of olive oil along with spices like black pepper, coriander, and oregano. If you give it a taste that is different from the fish flakes it has been feeding on, you might be able to get it to eat it.

Goldfish, in general, do not have any poisonous or toxic properties.
However, they usually host parasites and bacteria, which don’t change how they look or harm them in any way, but if humans eat them, it can result in serious illness.
Even if the fish appears to be healthy, they may still be carrying these parasites that might be passed to you. What is even worse is that the bacteria can survive even when the fish is being cleaned and cooked.

How does a goldfish taste?

The taste of goldfish is the same as what they eat-so the pet goldfish will taste like the fish flakes and pellets that they eat. When goldfish are prepared incorrectly, they can taste “muddy” since they are related to carp.

Can you eat goldfish eggs?

Yes, it is possible to eat goldfish eggs. Goldfish eggs are eaten as a part of the process known as “spawn gathering”. Eggs are typically collected from ponds or lakes where fish have been spawning, and these are then consumed in a variety of ways; for example, they can be added to salads or fried for additional consumption at other times.

After all, are goldfish edible? While technically speaking, it is indeed possible to eat goldfish, it is not recommended for obvious reasons. These fish may harbor potential parasites that could be harmful to humans, so even a thorough cooking process may not be enough to make these fish safe to eat. Besides the fact that goldfish are small and difficult to process, they most likely will not taste very good, either. There are a lot of varieties of fish to choose from when it comes to fish, and goldfish are not as efficient as the other types of fish.

Let’s keep these fascinating creatures as homes for our ponds or aquariums instead. We believe that goldfish should never be regarded as a snack!