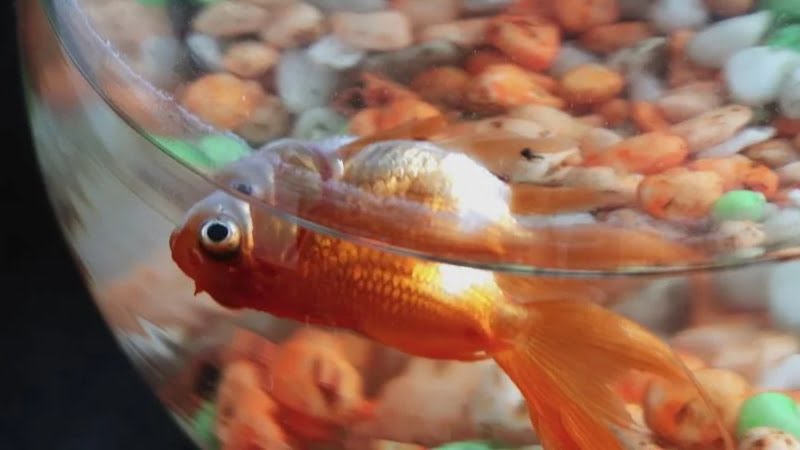 If you have had various goldfish and you wonder why do goldfish die so fast, I have the answer. The average lifespan of a healthy goldfish can last up to 15 years. But, due to unideal living conditions and pet shops’ care policies, many goldfish can’t survive their first three years of existence.

After considering every major factor that can lead your goldfish to premature death, I have found 7 causes that appear to be the most common. Please take a look at them now before another lovely one sacrifices!

7 Reasons Why Your Goldfish Die Quickly

TThere are 7 reasons why your goldfish may suffer an ill-timed death only a few months after being purchased. I will provide small pieces of advice on avoiding the case as well. Hopefully, these tips help with the answer to why do goldfish die so fast.

In movies, people have shown how they keep one goldfish in a bowl, and I was one of those who believe that it’s normal, if not standard, to keep goldfish in such a minimal environment. In fact, this is detrimental to the fish.

A fish pet owner should provide ample space for their fish to swim. A goldfish kept in a large bowl will not develop normally, and its organs will expand prematurely. The tension will quickly make the fish bloated from the inside and compress the normal development of the fish, forcing it to suffocate itself with its large organs and compact body size.

Advice: Overall, owners should ensure that they can provide their goldfish with enough space to swim freely. And how do they do it?

With species that can grow as big as 6 inches as goldfish, owners should choose big aquariums that offer enough space by following the 1 inch of fish – 2 gallons of water rule. This will ensure that your goldfish usually develop.

What happens to massive pet shops, and how do they always have fish in stock to sell? Many controversies around pet fish that many massive online pet stores sell. Most past buyers agree that fishes from famous pet shops with numerous branches usually aren’t well taken care of and are more exposed to premature death.

Advice: The same situation goes for goldfish. When you purchase one from big stores like PetSmart or Pet Co, I encourage you to come to one of the stores near your local to check out the health condition of the fish. In case you know a local goldfish farmer/ breeder, it’s best to opt for his goldfish. Since smaller farmers don’t handle a massive number of fish, they tend to take better care of their animals.

Goldfish don’t have the cleanest lifestyle, given that they dump waste multiple times per day. Then, the water quality is polluted by their waste, which has a high ammonia level. Goldfish’s health is affected if they are exposed to such water for long periods. This is why many goldfish die quickly.

Although goldfish are easy to care for, they require clean, well-aerated water. Stress and ammonia poisoning will reduce their lung capacity, and they will die prematurely.

Advice: Many people make a grave mistake when setting up a tank. They don’t perform a tank cycle that colonizes beneficial bacteria, which means you are over-filtering the water. Ammonia builds up quickly in tanks without these bacteria. You can also stop the cycle of an existing tank. This is often due to improper filter media cleaning, changing, or allowing your filter material to dry out.

But the lack of filtration isn’t beneficial either because stuff like algae or fish poo remains in the tank and pollutes water conditions, leading to more harmful bacteria development. You can check out AquaClear Power Filter or Fluval C-Series Power Filter. Please bear in mind the size of the tank to pick the ideal filtration system.

#4. Tank Mates Fighting Due To Overpopulation Or Species Differences

Overcrowded tanks can be a death sentence for fish. Fish can become stressed if they have very little space to move around in their tank. Also, more fish means more poo and more ammonia. First, it’s hectic to clean the water frequently. Second, it’s highly toxic leaving your fish in such condition constantly. No one likes to live in a crowded room, so we should avoid doing so to our orange friends.

On the other hand, not all fish get along. Even though you might have the best intentions, you could have created an underwater cage fight for your fish instead of a peaceful home.

Advice: We should always investigate which fish species go well with each other. For goldfish, you should keep them in a single-species tank, which means that they shouldn’t live with mates from other tribes. However, if you can provide ample living space, it’s possible to pair goldfish with those that aren’t too different in size compared to them.

Species that can share the tank with goldfish without attacking them are: platies, tetras, Corydoras catfish, plecos, etc. Also, consider the water parameters of each kind of fish to find out if they are compatible or not is a good idea.

#5. Lack Of Oxygen That Leads To Contaminating Environment

Although fish don’t breathe air the same way that we do, they still need oxygen in order to survive. Low oxygen levels can be indicated by fish swimming close to the surface, foul odors, and aggressive algae growth. It’s not fun cleaning an aquarium that has gone through a long time without enough oxygen. And it’s not fun taking dead goldfish out of the tank, either.

Advice: The best way to increase oxygen levels is to increase water flow in your goldfish Pond. A water feature, such as a fountain, can be added to ponds. You can also add a powerhead to your aquarium. In addition to increasing oxygen levels, adding more plants can increase them. These plants release oxygen through photosynthesis.

Fish don’t generally adapt well to sudden changes in water parameters. You should take this into account after purchasing a goldfish from a pet store and while you are raising one even after a long time. Here is why.

Pet stores don’t always pay great attention to the living conditions of different fish species. For example, the ideal water temperature for goldfish is from 68 to 74 degrees F, but pet stores may leave the water colder, so they don’t have to use individual heaters on each tank.

After purchasing the fish, if you provide it with the ideal water temperature, the fish may go through a shock, even though the temperature is perfect for the species. What you need to do now is slowly adjust the heat of the water for a few weeks. This will ensure that the fish adapt well to changes in the environment.

Advice: It’s straightforward to change the environment, as long as we do it with lots of patience. For example, when you want to change the water for the aquarium, don’t suddenly dump out all the water and give the tank a new one. My advice is to draw out 1/3 to 2/3 of the water and add new water to create a “neutral” mixture. Later, you can repeat the step, and the water condition will be improved slowly but safely.

#7. Malfunction Of Electronic Devices In The Tank

Filters, decorations, heaters, etc., are some devices that a goldfish tank needs to maintain the best living conditions. However, these can be electronic and have a possibility of malfunctioning and harming the fish in the tank. Electrocute is one of the rare reasons your goldfish die young, but it’s totally possible if you don’t check the devices frequently.

Advice: If you suspect that your tank has been electrocuted, turn off any electrical currents at the fuse box and wait for the water to cool down before touching the tank. It is always a good idea to check the quality of any product before you buy it as well.

Video: Why Did My Goldfish Die So Fast? (Beginner Care)

How long is goldfish’s lifespan?

A goldfish can live for 12-15 years on average. Some fish can live up to 30 years. This is possible only if the owner understands how to care for the fish, and it depends on the breed as well. Their goldfish will last about 4 to 5 years in ideal conditions for most households.

How do I stop my goldfish from dying?

You need to consider many factors: installing a water filter, providing enough oxygen, giving the fish a large tank to avoid ammonia suffocation, etc. In most cases, goldfish are easy to take care of. If you have a good tank condition, maybe overfeeding is the problem. Avoid contaminating the water by not giving you fish too much food too frequently.

What are the signs that your goldfish is dying?

You will notice weird swimming patterns in your goldfish. It will start losing appetite and doesn’t eat as much as well. This is a major red flag for goldfish since the species is more or less famous for its gluttony. It is a bad sign if it swims near the surface and gives signals that indicate suffocation.