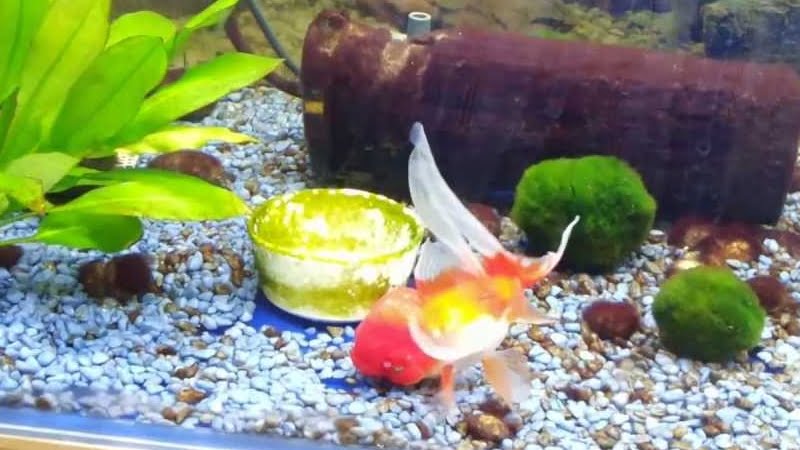 Nitrate (NO₃) is converted by nitrite (NO₂) because of nitrifying bacteria. Nitrite (NO₂) is converted from Ammonia (NH₃) by a different set of Nitrifying bacteria living in the filter, gravel bed, and solid objects in the aquarium. And Ammonia (NH₃), the cause of Nitrate (NO₃), is produced from a waste of an aquarium (such as goldfish) or uneaten food and dead plant material. At lower levels, nitrate is harmless. However, prolonged exposure to high levels of nitrate stresses goldfish, stunts their growth, damages their organs, and makes them more susceptible to disease. Nitrates are utilized by aquatic plants, but they promote unsightly algae growth if allowed to accumulate.

If goldfish nitrate poisoning happens, it will be pale, weak, and don’t eat like usual. Then it will die. To avoid that happening, you should know which are the causes, symptoms, and treatments. It’s even better if you know permanent ways to prevent nitrate poisoning for your fish.

When a goldfish have nitrate poisoning, these symptoms can appear, including:

When nitrate levels rise gradually over time, it is not uncommon for only one or two fish to initially exhibit symptoms. When these symptoms begin to appear, it indicates that your goldfish have been suffering for some time.

Add a new tank with goldfish if you desire to achieve. If the new fish exhibits one or more of the symptoms, despite being isolated and the absence of antagonism from its tankmates, you may be maintaining a poisonous aquarium. Even if the concentration of nitrate is higher and more poisonous, the newly exposed organism will often die within 24 hours.

In any case, the goldfish exposed to the toxic environment caused by the high nitrate concentration will perish. Even though fish can recover from nitrate poisoning, they will likely have a high sensitivity to nitrates in the future.

Goldfish Has Nitrate Poisoning: What Are The Causes?

As I previously stated, Nitrate is produced from the waste of an aquarium or uneaten food and dead plant material. Nitrate poisoning is long-term exposure to between moderate and high levels of Nitrate contents in the aquarium water. If 40 ppm or more Nitrates are continuously present in the water, the goldfish will start showing signs of nitrate intoxication. A sudden rise of nitrates is also harmful and potentially lethal to aquarium fish. The most common reason behind nitrate poisoning is the unregulated build-up of dissolved organic compounds in smaller fish tanks caused by overfeeding or overcrowding.

Overall, the cause of this poisoning are:

How To Cure Goldfish Nitrate Poisoning Without Nitrate Shock

If you observe any of the aforementioned symptoms, you should immediately do a water test using a reputable liquid test kit. After conducting the water analysis, you will be able to determine whether the poisoning was caused by a rapid jump in Nitrate levels or by prolonged exposure to lower levels.

Then, let’s learn how to treat them. But first, we need to determine what risk if you do the treatment too fast, Nitrate shock.

Since nitrates are known to deplete oxygen from the blood, goldfish suffering from nitrate shock or poisoning require an abundance of oxygen in the water. When you increase a large amount of water to reduce the nitrate level, which is causing your goldfish’s shock, the nitrate concentration may be drastically different. This is only possible with the use of a pond pump. These pumps propel a water jet to the surface, agitating the water. This action removes carbon dioxide from the water, thereby allowing the water to absorb oxygen. If the surface is exposed to fresh air, the greater the surface action, the higher the oxygen levels.

And then is the immediate treatment.

You must move your goldfish to another cycling tank right now and perform water changes of 5% at a time, removing and replacing the same amount. Then continue these small water changes until the nitrate levels reach 12 ppm. If water treatment that converts nitrates is available, treat the entire tank with a double dose to convert the remaining nitrate levels.

Until oxygen and nitrate concentrations are increased; reduce the water temperature to 54 degrees Fahrenheit

This can be achieved by utilizing colder water at each freshwater change; utilizing the air conditioner; directing a fan towards the tank and placing frozen soda bottles in front of it, or chilling some tank water in the refrigerator or freezer. Freeze a few smooth-surfaced stones. Remember that you must slow feeding at 64°F and cease feeding at 55°F.

After that, you need to do these cures as long-term and permanent solutions.

Have A Cleaning And Maintenance Tank Schedule

Fish tanks and ponds are a major source of nitrate due to the accumulation of waste particles. As soon as possible, nitrates should be eliminated from the water by things like decomposing food, decaying plant materials, and fish feces.

The nitrate level can be reduced to a level that is safe for your goldfish if these undesired items are eliminated from the water. You can vacuum the bottom of the tank or pond and clean other components like filters and pumps as part of the cleaning process.

Filter media can be used to remove nitrate and ammonia from water, as well as other chemical contaminants. There are two types of nitrate filter media: those that use microorganisms to reduce nitrate in the water, and those that absorb and remove the chemical.

As a result, these systems can be used to remove your fish of extra nitrate and heal them. Denitrators and filter solutions are more expensive, but they are more successful at removing the chemical substance.

Whether aerobic or anaerobic, these microbes convert nitrate to nitrogen gas. During the denitrification process, aerobic microbes consume a great deal of oxygen and can deplete the oxygen in the tank. After establishing themselves in the water, anaerobic microorganisms can effectively remove nitrate because they do not require oxygen.

Therefore, you can utilize anaerobic microorganisms to degrade excess nitrate in the water and keep your fish alive. You can introduce them via a growth medium or microbial culture to your aquarium or pond. They can also be obtained from the aquarium’s gravel or biofilter.

Put In Plants That Use Substantial Amounts of Nitrate

Some aquarium plants remove significant quantities of nitrate from the water and can be used as natural filters for the chemical. These plants utilize the compound as a nutrient, and as a result, they can keep its concentration low, thereby assisting your fish.

It is recommended to choose rapidly growing plants because they can absorb large quantities of nitrate quickly.

Uneaten food is one of the main causes of nitrate poisoning. So, you need to control the frequency you feed your goldfish and just let it eat a suitable amount of food.

Video: How To Reduce Nitrate Poisoning

Can a fish recover from nitrate poisoning?

Even in circumstances of unexpected exposure to high levels of nitrates, it is possible to mitigate the effects of the nitrates, giving the fish a fighting chance of survival. Do not feed the fish for a day, and then feed sparingly until the tank’s equilibrium is restored. Even though fish can recover from nitrate poisoning, they will likely have a high sensitivity to nitrates in the future.

How long does it take for nitrate levels to go down?

This procedure typically takes between 20 days and one month (6 weeks). At temperatures below 70 degrees Fahrenheit, cycling a tank takes even longer. Nitrifying bacteria develop slowly in comparison to other types of bacteria. It takes 15 hours under ideal conditions for a colony to double in size.

How long does it take for a fish to recover from nitrite poisoning?

If your aquarium has not been properly cycled, goldfish will typically die within 24 hours of exposure. Typically, signs of effective treatment can be observed within 3-5 days. However, treatment must be continued until the fish resumes normal feeding, at which point it can be reintroduced to the previous tank.