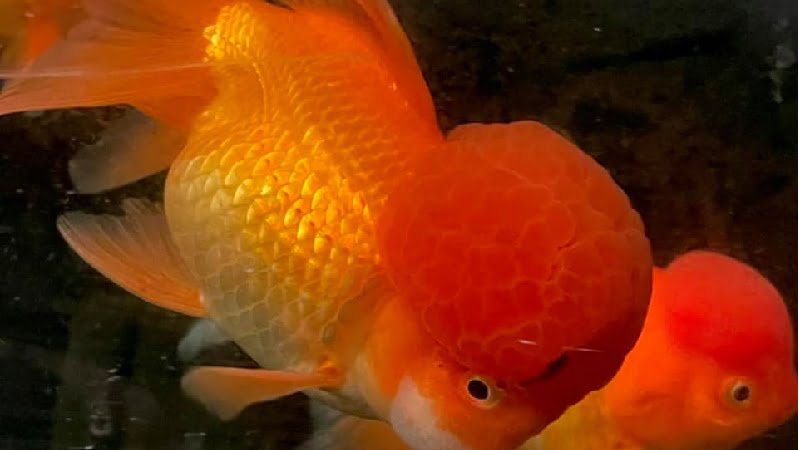 What to do with a goldfish that’s too big for its home? Goldfish need a large amount of space. If you can give them all the space they need, then they can live for 20 years or more. You should never keep them in small bowls or in a tiny pond. In this article, we will look at some ways that you can improve your goldfish tank to help it grow properly and the reason for the large size of your pet.

What To Do With A Goldfish That’s Too Big?

Suppose you’ve recently acquired a goldfish that is noticeably larger than the others in your aquarium. In that case, you can do a few things to help it feel more comfortable and reduce its chances of becoming aggressive. Let’s explore now!

Your pond will wind up being far smaller than the hole that was created when you first start putting things into it, like the liner, plants, and other decorations. It may be time to enlarge your pond if there are not enough spaces for all of your fish.

It will need some effort on your part, during which time your fish will need to be moved to a new location, and you may want a more powerful pump. You may have to move or remove some plants as well, but it will all be worth it in the end. Once you’ve enlarged your pond, everything should settle down, and you can begin stocking it again.

You have the option of rehoming some of your fish if you do not choose to extend the size of your existing pond or construct a second one. Adult goldfish, notably less popular color variants, may be pretty pricey. Adult goldfish, in general, can be costly. You can either sell or give away your goldfish.

Find a local goldfish or pond organization or club to assist you in placing your fish in a new and caring environment. Some individuals are just getting started with a new pond, and as a result, there is plenty of space in their pond to add something new. Advice on how to provide information about your fish:

Depending on where you live, you may be able to find a local fish shelter or rescue that would be willing to take your unwanted fish. You can also check local aquariums, botanical gardens, and even pet stores to see if they’d be interested in accepting your fish. Local goldfish breeders may be interested in selling your desired fish if they are in good health and have unique color patterns.

Why Do Goldfish Get So Big?

The care that these two fish had as pets likely contributed, at least in part, to their remarkable growth, which allowed them to shatter records for their species.

When it comes to goldfish development, the quality of the water plays an incredibly important role. If the water quality is low, the fish’s growth will be impeded, and as a result, they may even suffer physical defects. A balanced diet that includes plenty of healthy foods will also be necessary.

The kind of goldfish, as well as the age of the fish, both have an effect on how much it weighs. On the other hand, the typical goldfish kept as a pet weighs about eight ounces. When it comes to length, single-tail goldfish can grow to be between ten and twelve inches long, whereas fancy goldfish with their distinctive egg-shaped bodies usually grow to be approximately eight inches long.

Video: How Big Do Goldfish Get?

What is the maximum size of a goldfish?

What do you do with goldfish you don’t want?

Offer to give your fish away for free or promote that you will donate them to a pet store, school, or another educational facility. Adopting abandoned dogs is a great way to find new homes. A few of them contain seafood. Join aquarium and fishkeeping-related social media communities.

Does a giant goldfish break my pond?

Science claims goldfish may have a devastating effect on an entire ecosystem. Avoid dumping your goldfish into waterways. By messing up the bottom dirt and uprooting plants, they contribute to poor water quality.

In conclusion, if your goldfish is growing too large for its aquarium, there are a few things you can do to help them adjust. You can give them a smaller tank or move them to a new aquarium. You can also try feeding them small bits of food multiple times a day instead of one large meal. Finally, make sure to keep an eye on them and take care if they start to get stressed out.