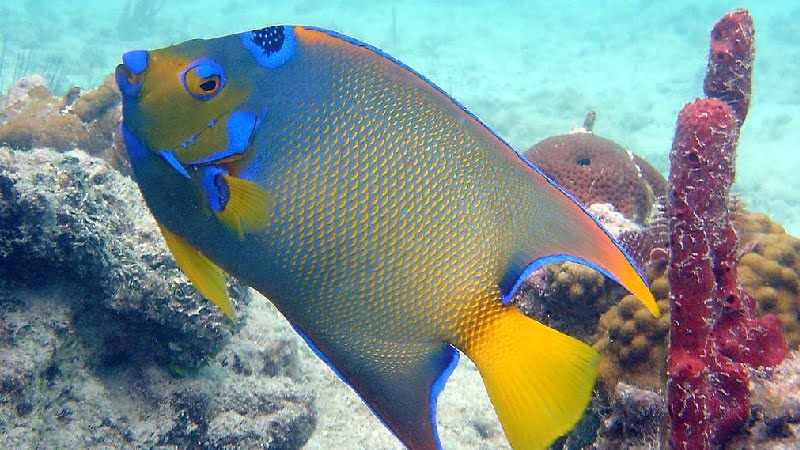 The Queen Angelfish is a beautiful and widespread species of fish found in tropical reefs worldwide. They are a favorite among aquarium enthusiasts due to their vibrant colors and graceful swimming habits. This article will take a closer look at this type of fish, including their appearance, behavior, diet, and more.

Among the many coral reef fishes on the western Atlantic, the queen angelfish (Holacanthus ciliaris) is one of the most stunning. The large flat bodies of these fish are a brilliant blue color with yellow accents on the scales and a bright yellow tail. Their only difference from blue angelfish (H. bermudensis) is a navy blue patch above their eyes at the center of their heads that resembles a crown.

According to some reports, queen angelfish reach a size of almost two feet, but they are likely not to exceed 18 inches, usually growing from eight to 14 inches.

The body of the queen angelfish is rather large, deep, and compressed. The robust spines, blunter snout, and spines on the gill cowl separate it from its closest relatives, butterflyfish. It contains 14 dorsal spines and a somewhat lengthy backbone on the angle of the preopercle.

The coloring of the queen angelfish is the most striking feature of its appearance. It’s speckled yellowish-orange and blue, with the amount of blue varying from person to person and in-depth.

A juvenile queen angelfish’s color constantly changes as it grows into a subadult, then into an adult. Yellow and green juveniles have a blue bar over their eyes. Their bellies are yellow trimmed with blue, and they have a yellow belly. In duller juveniles, the main parts of the body are predominantly dusky green, with only a hint of yellow within this green. The juvenile color variations of these fish share a yellow belly, pectoral, pelvic, and tail fins, as well as a blue spot on the gill cover.

Queen angelfish are a subtropical island species that can be found on coral reefs along beaches or near offshore islands. The queen may be found in tropical western Atlantic seas from Bermuda to Brazil and from Panama to the Windward Islands. It may be found at depths ranging from 3.5 to 230 feet below the surface.

The fish do not move; however, they are most active during the day and may be found towards the bottom of coral reef ecosystems, from nearshore shallows to the deepest parts of the reef, where restricted light limits coral development. They are mostly marine, although they can adapt to a variety of salinities as needed, which is why they are frequently seen in marine aquariums.

Water quality is very important for these angelfish, and anything less will result in stress that can result in several illnesses. An average water change of 10% to 15% should be accomplished every two weeks for optimal results in 180-gallon tanks. A water change of about 30% every three to four weeks should be sufficient to maintain high-quality water in tanks over 250 gallons (940 l).

In mature tanks, you can sometimes get away with longer intervals between water changes, but only if they demonstrate no ammonia, no nitrites, and have low nitrates (less than <10). The pH level of an angelfish should never fall below 8.0. Rather than using chemicals, water changes are the best means of controlling pH levels.

In captivity, Queen Angelfish are quite hardy once they become accustomed to their residence. A wide range of diseases can be expected in saltwater environments that are dominated by saltwater angelfish. When fish are stressed due to inadequate housing or tank mates, then they are likely to suffer adverse effects.

There are many diseases that these fish often deal with, including Marine Velvet or Velvet Disease, Cryptocaryon irritans, and Lymphocystis.

White Spot Marine Ich, Saltwater Ich, or Crypt is a frequent ailment of tangs and angelfish. Marine Ick causes itching and white spots. After a few days, these dots double in number. Parasites obstruct the fish’s gills, smothering it.

Lymphocystis causes cauliflower-shaped nodules on fins and mouth. Non-harmful nodules come and go. Only if they block the fish’s mouth for a long time should they be removed. Water changes assist the fish’s immune system.

Parasites on reef-kept marine fish might be difficult to treat. Copper, formalin, and quinine-based medications are toxic to marine life. Metronidazole can treat protozoan and anaerobic bacterial infections effectively and safely.

Slowly raise your tank’s temperature to 82° F (28° C) for external parasites. This prevents the parasite from attaching to fish and completing its life cycle. Higher temperatures and medicated meals give alleviation.

The tank of an adult Queen Angelfish needs to be 180 gallons (681 l) or bigger. Tanks that are smaller will make the fish aggressive towards the others. A juvenile may be grown out in a small tank, but after only a few months, the growth will render the tank useless. The best way to get started with these fish is by starting with a giant aquarium unless you need time to give their tankmate time to acclimate as the last fish to be added to a community.

A thriving tank should have plenty of live rock with naturally growing algae before introducing the juvenile. While they are young and still adjusting to the environment, they will also need ample hiding places. In a tank as large as 220 gallons, two queen angelfish can be accommodated, provided that there is enough hiding space. Each queen angelfish must be of different size and be added at the same time. It is imperative that the water quality be kept as high as possible.

This angelfish do not only eat sponges but will eat any jellyfish, tunicates, corals, etc., as well as plankton and algae in addition to sponges. Juveniles are functioned “cleaners”; at cleaning stations, they help remove parasites on bigger fish. While keeping queen angelfish in aquariums at home, aquarists have proven to be successful in feeding them a diet of meaty and algae-based foods. The diet is also one of the queen angelfish adaptations in a specific condition.

The Queen Angelfish is a particularly aggressive species. This fish can be seen alone, but it’s more frequent to see couples of individuals defending a territory amid the corals. Harems can occasionally be created by a man and numerous females — 1 male and 4 or 5 females.

They’re generally immature individuals that prefer shallower waters when seen alone. They settle down and protect their territory if they mate or choose an adult area. They’re not migratory fish, and in aquariums, they’re known for being hostile towards other fish.

As a first step, you should choose the right type of fish to keep in the tank. Choosing a fish that is tough enough to withstand the aggressive nature of the queen angelfish is essential. There are a number of options you can choose from if you want to have a good fish tank. Snappers and groupers are some of the options.

Ideally, queen angelfish should be kept with squirrelfish, groupers, snappers, surgeonfish, and triggerfish, along with other fish of similar temperament. Keep your pythons away from passive fish such as anthias, batfish, tilefish, and butterflyfish, as well as slow-moving or stationary fish such as frogfishes and scorpionfishes. The stony polyp corals are misunderstood as the big polyp stony coral (LPS) and have been known to bite the eyes of sharks. Once all other aquarium fish have been added, this angelfish must be added as the final resident of the aquarium.

Keep them away from angelfish with similar sizes, shapes, or colors. Immediately remove any fish that are constantly injuring each other.

As far as we know, breeding Queen Angelfish has never been achieved in captivity. The male and female are generally found in pairs year-round in nature, so it is assumed that they are monogamous. Breeding pairs spawn by slowly rising in the water column, bringing their bellies into close proximity, and releasing large quantities of eggs and sperm. On average, a female lays between 25 and 75 thousand eggs. The number of eggs can amount to as many as ten million during the spawning cycle.

Eggs are transparent and pelagic, floating freely in the water column. After hatching, they will float in the water column for the remainder of their life. The “pre-larval” angelfish at this moment is attached to a large yolk sac and does not yet have eyes, fins, or guts. The yolk of the fish is absorbed in about 48 hours, during which time the larvae develop into true fish and begin to feed on plankton. Within 3 to 4 weeks after hatching, the fish will reach 15 to 20mm and begin to settle down on the bottom.

The queen angelfish lifespan can reach 20 years or more with good care.

The average queen angelfish price is $50. However, prices can range from $30 to $100 depending on the size, age, and quality of the fish.

Video: How To Keep Queen Angelfish

What is a queen angelfish scientific name?

Holacanthus ciliaris was given to this fish as a new scientific name.

Where do queen angelfish live?

In mature coral reef systems, queen angelfish can be found. Their range extends from Bermuda to Brazil, as well as the Caribbean.

Is queen angelfish in the reef tank safe?

Reef aquariums aren’t recommended for these fish. While juveniles are somewhat tolerant to reef conditions, adults will destroy practically all coral except those belonging to the family Alcyoniidae or the Octocorals.

What are the differences between queen angelfish males vs females?

Males and females of the queen angelfish species exhibit several physical and behavioral differences. The most obvious difference is in their coloration; males are blue with yellow stripes, while females are orange with blue stripes. Males also tend to be larger than females, reaching up to 18 inches in length compared to the females’ maximum length of 12 inches.

The Queen Angelfish is quite resilient, but it does require an aquarium with a capacity of at least 180 gallons (681 l), making it relatively challenging to maintain. This angelfish can have protozoan parasites, which should be treated as soon as they show. It is critical for their health to feed sponge material to plant material and preparations.

The Queen angelfish is one of the most beautiful and popular fish in the saltwater aquarium trade. They are not easy to care for, so they do require a bit of attention to detail. If you are thinking about adding a Queen angelfish to your aquarium, be sure to do your research and be prepared to provide the proper environment and care.