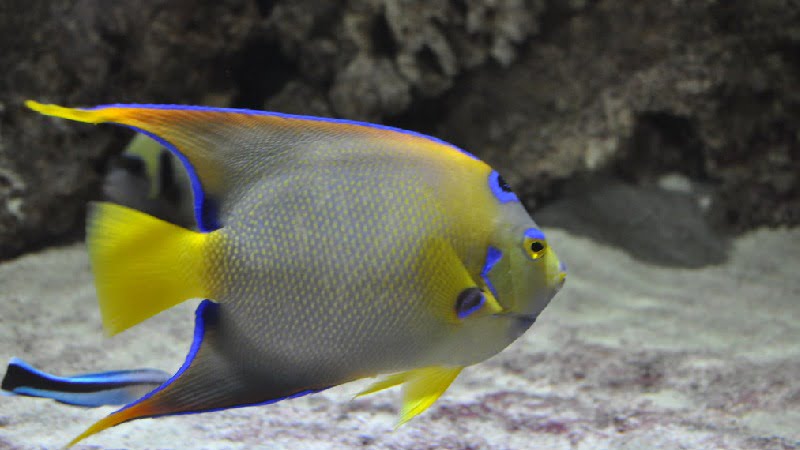 There are many different adaptations that the queen angelfish have that you may not know about. Here are four of the most unique ones:

In common with all bony fish, queen angelfish have a rigid internal skeleton supporting their fins, allowing the fish to move precisely. Their swim bladder is filled with gas, so they can adjust their buoyancy as needed. Water can be pumped over their gills, so they do not have to push themselves forward in order to breathe. A thin layer of mucus covers their scaly skin, and this mucus protects them from bacteria and parasites. The mucus also makes them slippery, which helps them slide through the water.

This species of angelfish has one of the most impressive adaptations that you are likely to come across: color changing. The act of stressing out is thought to occur when the body is under threat. This colorful fish blends perfectly with the coral-rich environment surrounding it.

The queen angelfish has the same ability to stay still in the water as several other species of fish. Its color camouflage, along with its size, helps it blend in with its surroundings in water, making it nearly impossible for predators to detect it. However, even if the predator detects its presence and attacks, it can get away due to its streamlined body shape, which makes it quite agile and helps it traverse through small gaps in coral reefs and other marine biomes.

As we mentioned earlier, they primarily eat sponges that are found on the seafloor. That’s a surprise because these sponges have tough exteriors made of silica or calcium, which aren’t just bad for your taste buds but also not that great for your skin.

These sponges frighten other coral reef organisms, but the queen angelfish takes on their tough exterior without a problem – a feat attributed to its protracted jaw and overlapping teeth. During feeding, this angelfish species secretes a thick mucus from its mouth, coating sponges with it to irritate them. As a result of these physical adaptations, the queen angelfish can feed on sponges and avoid being eaten by other species of fish due to their unpleasant taste.

An extensive network of nerves extending the length of the body of a fish is referred to as the lateral line. A potential predator or food source swimming near these nerves will cause vibrations detected by these nerves.

All of these modifications are critical to their survival. It would have been impossible for this innocent species to protect itself from many predators if it weren’t for its unique ability to change color. More significantly, this species’ nutritional characteristics let them eat on sponges that are abundant on the sea floor, which helps preserve the marine ecosystem’s equilibrium.