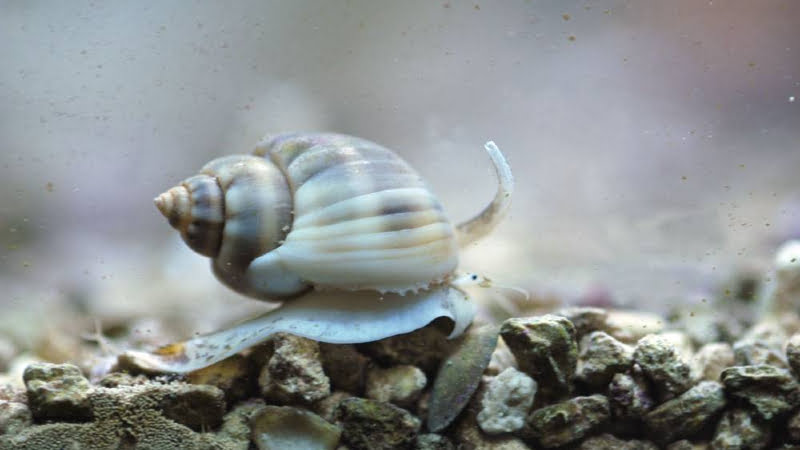 The Nassarius snail is one of those snail species that you should consider adding to your tank as part of your cleanup crew. I always recommend this type of snail for beginners because they are very easy to take care of, it doesn’t take much time and effort to take care of them. Feeding them is also very simple.

What Do Nassarius Snails Eat?

Many would expect that snails would be helpful in preventing the problem algae population in the tank, but that is not the case with the Nassarius snail. Nassarius snails are opportunistic eaters of dead organic matter, they do not eat algae but eat carrion, dead fish, detritus/fish waste. So they can be somewhat helpful in cleaning up meaty food that’s left in the tank such as mysid shrimp or brine shrimp, but not the algae.

Nassarius snails usually don’t cause problems in aquariums and are reef-safe. It is likely that if you saw snails eating fish, the fish was already dead or the snails were not Nassarius.

Do Nassarius snails eat other snails?

No, as mentioned above, Nassarius snails are carrion-eaters, not living creatures like other living snails. Only when the other snails die, maybe Nassarius snails will eat the carcass. In general, they are gentle creatures and not predators.

If you are looking for a snail that eats diatoms then Nassarius snails are not a good choice as they do not eat diatoms. You can check out other snails like Nerite or Trochus snail, The Lawnmower blenny and Kole tang.

However, the presence of Nassarius snails in the aquarium also inhibits the growth of diatoms indirectly. The surface disturbance of the substrate disrupts the mechanics of the substrate, making it difficult for diatoms to grow.

The removal of debris and waste also down on the risk of contamination in the tank. Because the polluted environment has the ability to create fuel for diatoms or other algae to grow.

If you have a lot of snails in a tank, make sure your tank has enough leftovers and debris for all of them. Otherwise, it is best to add meaty foods such as frozen brine shrimp, freeze-dried larvae and cut larvae cut-up pieces of fish and seafood. Long-term food shortages can cause them to die and turn cannibalistic.

Nassarius snails are good detritus eaters and will help clean up and uneaten fish food and fish waste within your aquarium. Snails are carnivorous animals and therefore will not really help you with algae problems. They will eat any animal that dies inside of your aquarium, but won’t actively hunt for them.

How big do Nassarius snails get?

The Nassarius Snail is a small snail that grows to a maximum of about half an inch in size as a fully-grown adult.

Do they need sand?

Nassarius snails burrow into a substrate when they are not active, so you have to make sure that you have a soft substrate such as sand or mud.

To sum up, the Nassarius snail does not eat fish while the fish are alive. Only when the fish is dead is there a chance these snails will eat your fish because they are carrion eaters. They also bring a lot of benefits to your tank. They clean the aquarium by eating debris and uneaten food. They also indirectly inhibit the growth of algae.