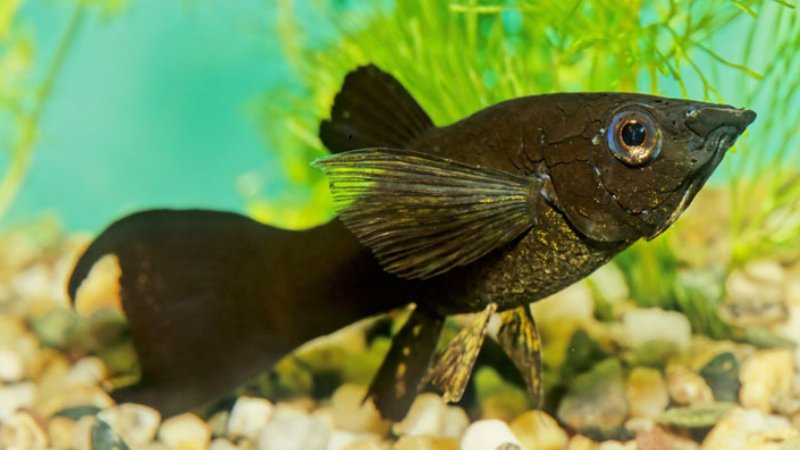 It’s heartbreaking to see a pet become ill, especially if you don’t know what is happening with it or what you can do to assist. Sadly, molly fish, like other creatures, may become ill.

You may learn about the most prevalent molly fish illnesses, parasites, and treatments in the sections that follow. I’ll also provide you with some important and practical molly fish illness prevention advice.

Related Post : How To Tell If A Molly Fish Is Dying and Ways To Save Them

If you are keeping molly fish, you will likely encounter the following diseases and illnesses, so note their symptoms and treatment.

When you notice white spots on the fins and skin of your molly fish, you know Ich or Ick disease is present. Fortunately, you can easily treat this disease if you begin treatment right away. The reason behind the disease is an ectoparasite.

Additionally, apart from the spots your fish develop, you’ll notice them trying to scratch off the spots by rubbing themselves against objects in the tank. You may also observe them losing their appetite during the illness.

The parasite Oodinium causes velvet disease by burrowing into your fish’s skin and generating microscopic gold-colored cysts. This illness spreads swiftly and frequently, with disastrous effects.

Immediate intervention is required to rescue your molly fish, particularly since spotting the condition in its initial stages is difficult due to the cysts’ tiny size at first. Lesions on the skin occur only as the illness advances.

Molly fish fin rot illness can be caused by either fungal or bacterial diseases. As a result of high levels of ammonia in the tank and poor tank conditions, bacteria and fungi thrive in the tank causing disease.

Opportunistic bacteria and fungi will thrive in bad tank conditions when fish are injured.

When the body of the fish begins to show white milky areas (advanced stages) on other areas, as well as a tail or fin that appears chewed up, shredded and stuck together, that is a sign that its fin or tail has rotted.

A protozoan thrives in bad water conditions where it can easily enter your fish’s bloodstream through wounds, cuts or scratches on the skin. The protozoa then gradually work their way deeper into the muscles until they eventually find their way into your fish’s blood.

White spots on the skin, excess slime, weakness, loss of appetite, and lethargy are a few of the symptoms of this disease.

Mouth fungus is a bacterial illness that looks suspiciously like a fungal infection.

It shows as white threads or splashes on a fish’s mouth or skin. In severe stages, it may be accompanied with ragged fins, fast breathing, increased mucus production, and ulcers and lesions.

It is critical to intervene early!

Dropsy is a terrible sickness that is, sadly, incurable. It is an illness that causes renal and liver issues, causing fish to retain water.

Fish will seem swollen with scales protruding as a result of water retention. They will struggle to swim. Dropsy can be caused by poor water quality and stress.

A molly fish with swollen gills or one that frantically seeks air at the surface is a sign that the aquarium’s water isn’t of good quality.

As a result of ammonia poisoning or carbonate poisoning, the fish may appear sick and have swollen gills.

Ammonia levels can rise to dangerous levels when you do not change your aquarium’s water regularly, or if food is left to decay in the aquarium.

Normally seen in recently cycled tanks with erroneous water chemistry. Red stains on your molly fish’s stomach or body might be caused by ammonia or nitrite toxicity.

High ammonia and nitrite levels are common in aquariums that have not been adequately cycled. If you’re a newbie, learn about the aquarium cycle and let your aquarium age for at least two weeks, ideally six, before adding any mollies.

In just a few days, a fish that has contracted this disease can suffer from lesions, ulcers, pale gills, bulging eyes, and if the disease becomes advanced, the fish could rot due to poor circulation. When a fish becomes infected, they will stop eating, their coloration will darken, and eventually they will die.

Swim bladders are gas-filled internal organs that help fish control their buoyancy, help them keep balanced while swimming, and maintain their current depth in the water.

Despite the fact that swim bladder disorders are not very common in mollies, there are circumstances in which this disorder may occur due to high stress and poor water conditions.

When a fish has an inflamed swim bladder, it has a distended belly and its head points downwards when swimming.

How To Treat These Molly Fish Diseases

Keeping the temperature and the treatment up for at least 4-7 days, then performing a major water change (70%), making certain the substrate is thoroughly cleaned as well.

Even if you keep infected fish in a separate tank where you treat them, you should apply medication to the fish on a tank-level.

Currently, there is no treatment for fish suffering from dropsy, especially since they cannot be saved once they start displaying symptoms.

Experts and hobbyists recommend Epsom salt baths as a way to slow down the aging process and make fish more comfortable in their environment.

In spite of the fact that the disease is incurable and will eventually lead to the death of your fish, you should do as much as possible to prevent it through proper nitrogen cycle management.

The good news is that you may still be able to save your fish if you immediately start to eliminate toxins from the aquarium by taking immediate action (skipping feeding for the day, performing a water change) in its early stages.

Ensure that you continue to monitor the levels of ammonia and nitrite in the aquarium, and make regular water changes so that toxins that accumulate due to the wastes that your fish produce will be diluted.

Water maintenance, diet adjustments, and even antibiotics are all part of the treatment. Allow the fish to fast: If an enlarged stomach or intestine is suspected of causing a swim bladder disease, the first step is to stop feeding the fish for 3 days.

The following items will help you keep your molly fish healthy and free of disease:

What are the signs that your Molly fish is sick?

There is a high probability the fish is sick if it appears to have a dark patch on its body or if it acts sluggish. Also, the fish may start swimming in circles or in tight patterns; stop eating, or start swimming slowly in the water.

How come so many diseases are called “livebearer disease”?

Because the illness is capable of infecting all animals. In most animals, there are no evident symptoms or concerns, but it can be lethal in others. However, the majority of infections are not fatal. In other circumstances, an afflicted animal lives a long life with no symptoms before dying abruptly.

Do mollies have a high risk of disease?

The majority of fish infections are worse when the fish is agitated. Swim bladder disease can be caused by chilling, bacteria or digestive issues. The symptoms of fish affected all, particularly balloon mollies’ inability to achieve equilibrium in water treatment examine the water temperature. A medical bath may be beneficial.

The majority of species are resilient and simple to care for, making them ideal for novices. They are effective in peaceful social tanks. A group of mollies can survive for up to 5 years if kept in a proper habitat.