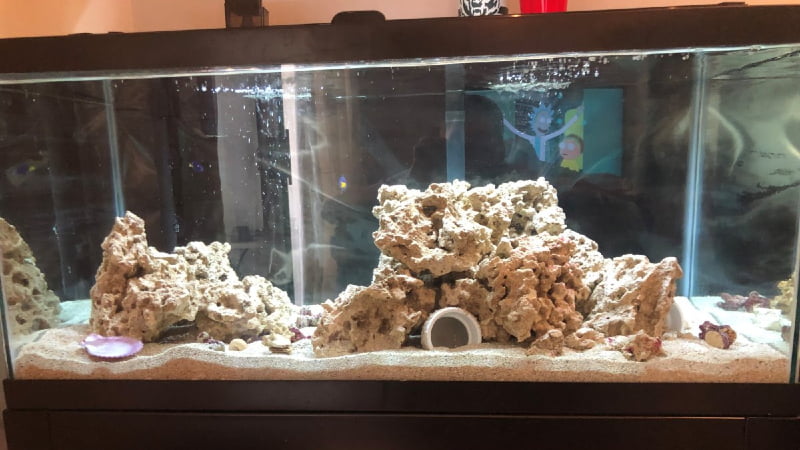 If you are planning to raise mantis shrimp, this article will guide you on how to set up a tank for them, choosing the right mantis shrimp tank size.

The Mantis Shrimp is capable of clubbing its prey to death at lightning speed, and they possess the most complex eyes of any animal in the Animal Kingdom. Many hobbyists consider them as a pest because they hitchhike in live rock and get into the aquarium harming other creatures. However, there are also many people who keep mantis shrimp in tanks just for this species. They are undeniably fascinating and very cool marine invertebrates.

It is very easy to care for Mantis shrimp since they are typically straight-forward to keep. Here are some helpful tips you should follow in order to keep them in an aquarium for the best results.

You should not keep ‘Smasher’ Mantis shrimps in a glass aquarium since it is possible to chip the glass even with small individuals. It can also be broken by large ones. In addition, there are also many reports that they have a habit of smashing when they meet any obstacle, until their path is clear. Therefore, many aquarists  have seen the shrimp attack its own reflection in the glass of the tank. For large species, acrylic tanks are the best choice.

In spite of the fact that the quality of the water is easier to manage in large aquariums, small mantis shrimp do quite well in 10 gallon aquariums. Those who are longer than 8 inches or so, should be housed in a tank that is 20 gallons or larger.

They are hardy, and they are difficult to kill, so they are not fussy about the parameters of the tank water. They are also quite easy to maintain. Most Mantis shrimp species thrive at temperatures of 72 to 80 F (22 – 26 C), and salinities of 1.018 to 1.025. Nevertheless, the natural habitats of various species vary from temperate to tropical waters, so be sure you know what the natural habitats of those you keep.

A mantis shrimp is an ambush predator and needs hiding places.Therefore, it is best to have a sandy substrate at the bottom of the tank for them to dig holes to hide in. This is all the more necessary and seemingly mandatory if you are going to keep a ‘Spearer’ Mantis shrimp. Beds of sand should be 1.5 times deeper than the animal’s length.

About keeping a ‘Smasher’ Mantis shrimp, you should add some gravel or rocks and PVC pipes to mimic their natural habitat. In order to conceal itself, this type of shrimp favors tubes-shaped cavities. It is even known that some Mantis shrimp species close their cavity at night so they can feel safe and stress free in the tank. While mantis shrimp are fearless, being forced to remain in the open will result in their death.

The fish are very strong and are capable of pushing, dragging, digging and rearranging everything within your reef tank. There is something remarkable about this shrimp, it moves large amounts of sand and gravel from one place to another all on its own and each time they manage to build relatively stable burrows of their own.

It would be nice if an aquarium light timer could mimic their natural cycle.

Although Mantis shrimp are quite hardy, not demanding too much in terms of water quality, they are also sensitive to air-borne chemicals, like other invertebrates. Therefore, filtration are needed. A simple filter can often be used because it does not require any special or complex equipment. It doesn’t matter what you buy as long as it meets your budget.

They have a bad reputation for being extremely aggressive and unable to live with other species. So keeping shrimp with small fish, crabs, snails, shrimp, etc so they can live together is not possible. They are only fascinating when kept in species-only tanks.

Video: How To Setup A Mantis Shrimp Tank

Can a mantis shrimp break an aquarium?

Their punches are strong and they slam down on their prey with extreme velocity and power. The force of their strike can break aquarium glass and split open human thumbs

Can you keep a mantis shrimp?

If you decide to buy a Mantis Shrimp or keep one, it is best kept in a tank by itself because of its territorial and aggressive nature. However, several can be kept together in a large tank with plenty of room.

Can a mantis shrimp kill you?

Yes it could if the human is allergic to shrimp, consumes one and suffers from anaphylaxis shock. There will never be a shrimp that can kill a human by snapping its claws.

Although the Mantis shrimp are known to be wild and aggressive predators, some aquarists keep these animals intentionally. Because besides being ferocious, mantis shrimps are also very beautiful, smart and easy to care for creatures. If you also intend to keep Mantis Shrimp then read and follow the instructions above to build a tank perfectly suited to keeping these aggressive shrimp.