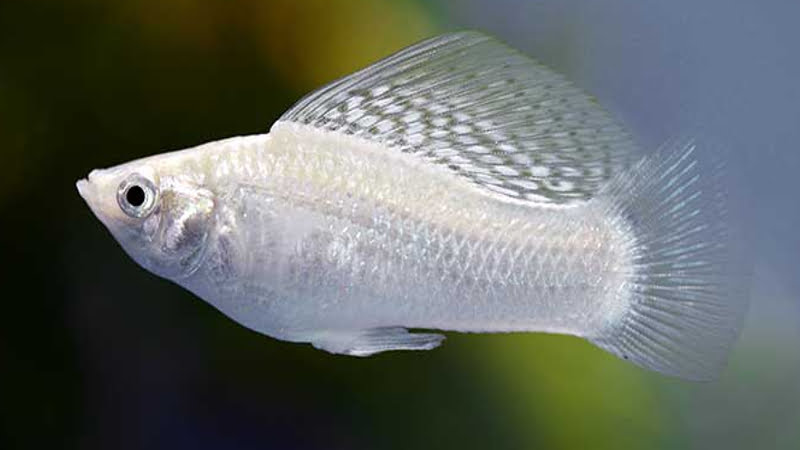 Gentle and attractive, colorful and multi-shaped, Mollies are always good for beginners, even for professional breeders.

Keeping them all in a crowded tank, on the other hand, is a recipe for trouble. This situation can deteriorate if you do not know how to clearly identify their gender. Yes, most cases show that a male Molly fish is aggressive toward other males and initiates a terrible fight with one of them, even though all are beaten and injured. No one wants this to happen as fish lovers and aquarium enthusiasts. So, keeping 1 male Molly fish and 3 females is the suitable ratio.

In this post, we’ll go over how to tell the difference between a female and a male molly fish based on physical and behavioral characteristics, what you should do, and what you should avoid ensuring Mollies have a happy life.

Mollies come in a variety of colors due to the wide variety of species, but you can tell which one is a male merely by looking at its color. Mollies’ male color patterns tend to be more vibrant and striking than those of their female counterparts. Female mollies, on the other hand, have bland, timid, and modest color schemes, which is why the stronger color variants of male mollies appear to be appealing. It also attracts female mollies to mate with each other.

In nature, you’re likely to come into this situation on a regular basis. Please spare a few minutes to observe. Isn’t it amazing?

Generally, females are larger than males. Depending on the species, they can grow to a maximum size of 5 inches, while males remain in the 2.5-3.5-inch range.

On the other hand, males seem bigger if they suffer from conditions that induce bloating. Overeating and constipation are the first two possibilities to consider, particularly if you leave food floating on the top of the tank after your fish have had two to three minutes to feed. Other physical causes of flotation issues include fatty liver disease and kidney disorders. The only way forward is to determine the cause and treat him as quickly as possible.

Males’ dorsal fins are typically three to four times larger than females’. This is a remarkable trait that is immediately apparent.

Reason? Male molly fish with dorsal fins appear larger and more threatening to other males due to the dorsal fin. The female will then examine the male’s dorsal fin size, among other factors, when choosing who to mate with. You could say that this is a significant issue for him.

It is through the use of these copulatory organs that the sexes exchange sperm during the act of mating. Although the size of the gonopodium may vary based on the male’s size and developmental stage, it is always narrow and pointed at the end. To top it all off, this organ will preserve both the male and female fish’s dorsal and caudals in their original hues.

Another feature for distinguishing your female and male molly fish apart is the time before they are pregnant.

When the female is about to deliver, some molly keepers claim you can see the fry’s eyes in the same location.

The Behavioral Differences Of Male Molly Fish: What You Need To Remember In Detail

So, why does a male Molly fish try to get a female one to interact with him? Mates for sure. You might not know this, but male fish can be very aggressive when they want to mate with their females. It will happen more often if your mollies are having babies. But don’t worry, they are social fish, so they don’t usually do this.

This job is an important part of the lives of both the male and female Molly fish. Signs can help you figure out if your fish are mating if you don’t know how to realize it. Among other things, there is this aggressive way that males chase females around the tank. Another sign can be identified when your male mollies form groups and pay a lot of attention to a female. They may be looking for that female to be their mate.

Why Do Male Molly Fish Fight Each Other?

There are two reasons for this.

The first reason, a male Molly fish can be aggressive and tend to fight for being a winner and mating with females.

Last but not least, the problem is that your tank is too small. As a result, they are unable to establish their own area.

The section below will be guidelines for resolving these issues, also tips to build a happy life for your males.

How To Raise A Male Molly Fish To Be A Healthy, Happy Little Guy

Not only males but all Mollies must also be bred in a fresh-water tank with a temperature from 72 to 78°F, acidity is from 6.7 to 8.5 pH and water hardness is from 15 to 30 dkH. Your tank setup and diet for them must be suitable, too. The detailed caring tips are discussed in other posts, so please check them for more information.

Please remember that keeping the most comfortable environment for their development is the concern that is at the forefront. The larger size tank for multi-male Mollies is recommended immediately because they need their own space more than you imagine. The best ratio is 1 male and 3 females, or at least 2 females in a 10-gallon tank.

Mollies are friendly, but sometimes fighting isn’t a serious case. Take it easy and enjoy the beauty of these little guys!

How many male mollies should be kept together?

There should be one male and three females in a 10-gallon tank or at least two females.

In order to accommodate more than four mollies, a tank of at least 20 gallons is required. If you plan to keep many shoals of mollies, a 45-gallon tank is ideal.

Be aware that male mollies have a history of causing distress in females by harassing and intimidating them. As a result, a shoal should be dominated by females if it is to be free of hostile behavior.

Is it OK to have all-male fish in a tank?

It is possible, but not guaranteed, to keep all of the males. One of the most important factors for success is to have a big number of the same species so that the territorial hostility is not concentrated on a few individuals. It’s also a good idea to find new homes for any bullies that show up and to create a hideout with lots of openings and snares.

Mollies, for the most part, are very easy to breed. A single female can give birth to over a hundred baby mollies, also known as fry, in a single live birth.