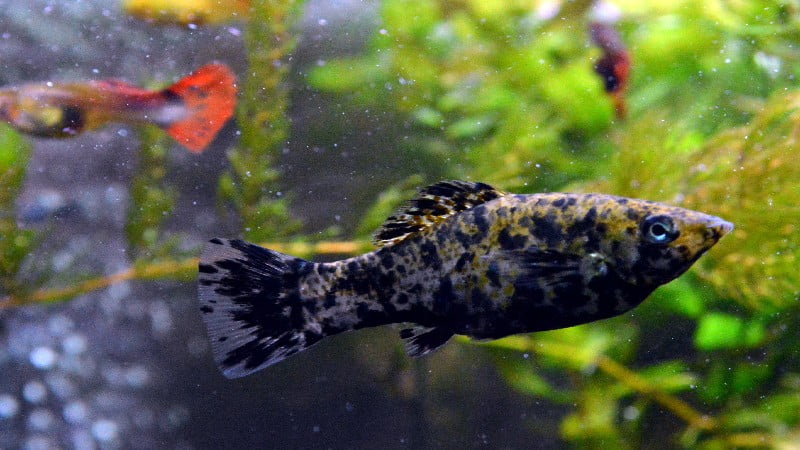 The Molly fish is a popular freshwater aquarium fish. They are available in a variety of colors and can grow up to six inches long. Some people believe that molly fish is aggressive, but is this really the case? In this article, we will explore the truth about “Are molly fish aggressive?“.

The native habitat of these fish stretches from the southern United States to Mexico. Furthermore, they do well in brackish estuaries. This is also why you should research your fish before putting up an aquarium.

Introducing molly fish to a tank might be a challenge at times. Furthermore, they have no prior understanding of its tank requirements, both in terms of capacity and clean-up. The Molly fish is likely to display its aggressive behavior frequently.

Furthermore, mollies frequently prefer to reside in a warm environment with a minimum temperature of 78 degrees Fahrenheit.

Are Molly Fish Aggressive? Why Does It Happen?

Mollies are a type of fish that is known for being aggressive. There are a few reasons why mollies may become aggressive. One reason is that mollies are territorial fish, and they will protect their territory from other fish.

Another reason is that molly fish are often kept in aquariums with smaller, weaker fish, and the mollies will attack and eat the other fish. Finally, male mollies can be aggressive towards other males and females in order to defend their territory or mate. To learn more about the male and female ones in detail, let’s scroll down now!

Female mollies, in general, are not aggressive. They are a peaceful and friendly species of fish.

Because Molly’s stress is increased by overcrowding, they will show signs of aggression if your tank is overcrowded. They also engage in aggressive feeding behavior.

Another reason is the female Molly’s stress during her pregnancy. Female Molly tends to be bold in this situation. However, it’s only a matter of time.

They prefer to hang out in relatively warm places at this time of year. Female mollies that are pregnant tend to hide and remain vigilant of their surroundings.

Only in exceptional circumstances there are abnormal female mollies with strange personalities and aggressive tendencies.

If you have many male mollies, you’ve probably witnessed a lot of fighting and aggressiveness.

Mollies are typically calm creatures. Male molly fish, on the other hand, have aggressive tendencies.

They are voracious feeders who will devour whatever they can get their hands on. Male mollies are naturally aggressive during feeding times as a result of this.

Male ones also pursue female ones to mate. The attention-seeking behavior of focusing on females and possibly territory can lead to fights amongst male mollies.

What to Do About an Aggressive Molly

When a molly fish appears sick, there are several things at play, the most obvious of which is an unclean tank environment.

Furthermore, you must follow some cleanliness standards and requirements for your fish to live a long life.

In the middle of this, there may be unlucky days when a molly fish’s aggressive character persists for an extended period of time. So, what are the next steps?

If the following precautions are taken, a molly fish will stay non-aggressive:

Water Quality: Mollies aren’t the best pets to have regarding water quality. Adding one teaspoon of sea salt per gallon, on the other hand, has a more favourable effect.

Live Plants: Keeping molly fish is less stressful when the tank has adequate illumination and a large number of live plants. Most of the time, they munch on live plants. It’s also good to keep some algae in the tank because they enjoy grazing on new algae development.

Mollies frequently eat algae that have grown in an aquarium. They also like nibbling on it. If your fish tank lacks algae, you can give an alternative. Furthermore, some of these alternatives include modest amounts of chopped cooked spinach, exceptional commercial molly food, spirulina flakes, and others.

Sailfin mollies are also one of the most dramatic livebearers on the planet. Compared to other molly fish, they can be more challenging to keep. On the other hand, Sailfin mollies require a 20-gallon tank to swim around in. Furthermore, any restriction on their mobility may have a negative impact on their health.

What Happens When Mollies Chase Each Other in a Tank?

Mollies in a tank chase each other for a variety of reasons. It’s fine to be concerned about pursuing and nipping at each other if you’re a responsible aquarist. This could, however, be a harmless prank. Several exceptions include when an aquarist must be vigilant and separate the mollies in separate tanks.

1. Mollies’ Sex: The most common reason for mollies chasing each other is that they are of different sexes. Furthermore, the male pursues the female for mating.

It is not recommended to mix opposite sex in the same tank, as the male counterpart is more aggressive unless the goal of growing them together is to breed them.

A male molly may also pursue another male to establish his territory by chasing away intruders or attracting the attention of another female in the tank.

2. Molly Fry: Mollies are livebearers and do not lay eggs. Adult mollies, unfortunately, lack parental morality and are hostile toward their juveniles.

On the other hand, they chase them around the tank, hoping to eat their fry. Parent mollies have even been spotted feeding on their own fry in the worst-case conditions. This uncomfortable scenario can be challenging to control for certain very aggressive mollies.

When it comes to whether black mollies are aggressive fish or not, the answer is a bit complicated. Mollies are not aggressive fish and can be kept in community tanks without any problems. However, black mollies can be a bit more aggressive than other mollies species and may tend to nip at the fins of other fish in the tank.
If you are considering adding black mollies to your tank, it’s essential to keep this in mind and make sure you have enough space for them to swim without disturbing other fish.
Related Post: Black Molly Fish Male And Female: How To Determine & Important Notices

They aren’t always like this, but the room is crucial. Ensure the tank is large enough and that there are enough plants and hiding spots.
Furthermore, each of them has a distinct personality, and both character and stress influence violent conduct.
Related Post: Balloon Molly Fish Price And 15 Common Types Of Mollies

Are mollies aggressive to Goldfish?

Mollies are generally not aggressive to other fish, except other mollies. However, when housed with Goldfish, the mollies may become more aggressive to protect their territory. If there is only one Goldfish in the tank, the Molly will likely not bother it, but if there are multiple Goldfish, the Molly may attempt to chase them away or even attack them.

Mollies are fin nippers, to be sure. Mollies are known for being fin nippers while being quiet and gentle. To establish dominance and maintain their area, male mollies especially like nibbling the fins of other males.

How can you tell if a fish is aggressive?

If a fish in the tank has been assaulted, there will be apparent symptoms. Marks on its body and nips on its fins are examples of such signals.