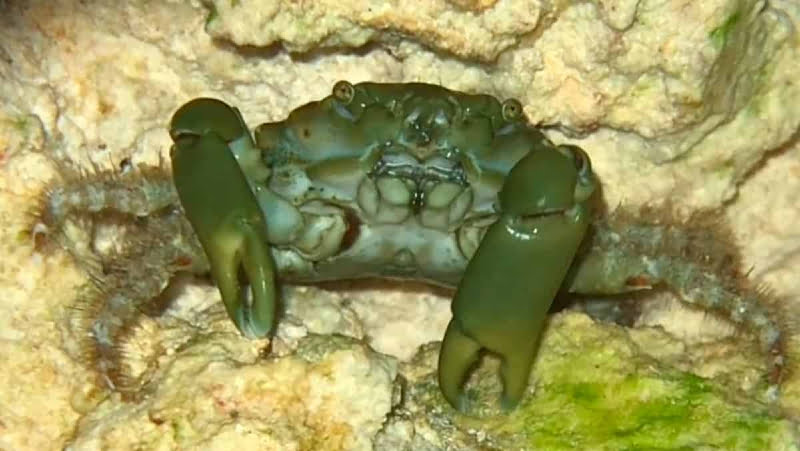 The Emerald Crab (Mithrax sculptus) is a saltwater invertebrate that is often used as part of a clean up crew in marine fish tanks. Unlike most animals, crabs in general and emerald crabs in particular cannot grow in a linear fashion because their exoskeleton (the hard shell) does not grow. Their shells must be shed, a process called molting.

This article will discuss in depth the molting process of Emerald crabs, how often do emerald crabs molt.

Yes – In general, lobsters, crabs (hermit crabs and emerald crabs), and other crustaceans all molt to allow them to grow and develop in size. Unlike the solid green of a regular emerald crab, the color of an emerald crab that needs to molt appears more speckled – more of whitish green. The exoskeleton begins to loosen during this stage. A crab’s exoskeleton will harden once it sheds its previous exoskeleton, and will be a nice solid color once again (until the next molt occurs).

In addition to allowing the crab to grow, molting is also essential in getting rid of parasites, barnacles, and other organisms that may have grown on its shell. It also helps to remove shells that have been damaged by bacteria that degrade the chitin within the exoskeleton.

How Often Do Emerald Crabs Molt

However, the above is just a rough gauge. There’s no set schedule for molting. Emerald crabs will molt when they need to. How often your emerald crab molts depends on the water conditions, availability of food, and the crab’s growth rate. This means that the faster they grow, the more often the molting process will occur.

Like most crabs, emerald crabs will molt from time to time. When the crab outgrows its current shell, it have to molt.

The emerald crab leaves behind an empty shell when it is molting, which they will then hide for several days. Some of the hidden items will remain hidden for a week or more! The reason why they do this is that they’re vulnerable with their new shells, which are soft. As they do not have the hard exoskeleton to protect them, they will stay hidden. Consequently, if you are keeping crabs in a community tank with fish or other crabs, you are going to need to provide them with a lot of hiding places.

What Should I Do With The Old Exoskeleton?

The shell should not be removed from the aquarium. It has been reported that crabs eat their molt once they shed their skin, to regenerate the energy they lost during the molting process. It is also beneficial to other creatures in the aquarium as well!

Is My Emerald Crab Dead?

A very common question for new crabbers ask when their crab molts for the very first time. Like shrimps, emerald crabs shed their exoskeleton as they grow, which leaves behind a creature that looks as though it has died. After molting, emerald crabs will hide for a few days or sometimes a week before they reappear. Therefore, many people cannot determine whether the crab is dead or just molting

Don’t worry if you see an empty shell at the bottom of your tank! There is probably just an exoskeleton, not a dead crab. In case you are unsure, try flipping it over with some tongs to see that it’s hollow.

How long does an Emerald crab molt?

Emerald crab undergoes molting within a matter of hours. During this period, they will hide or remain motionless for a few days until the exoskeleton hardens.

What to do after Emerald Crab molts?

How long do Emerald crabs live?

The lives of emerald crabs in the wild can last from two to four years. However, they are capable of living more than a couple of years in a captive environment such as an aquarium or marine tank if proper care is taken, such as proper diet, water parameters, breeding, and avoiding crowding so that they can live in peace.

In Emerald crabs’ life-history, molting is an essential and ongoing physiological process. Molting plays a critical role in the development of an individual. Additionally, it is a slow, delicate process. While this is occurring, avoid bothering your Emerald crab.