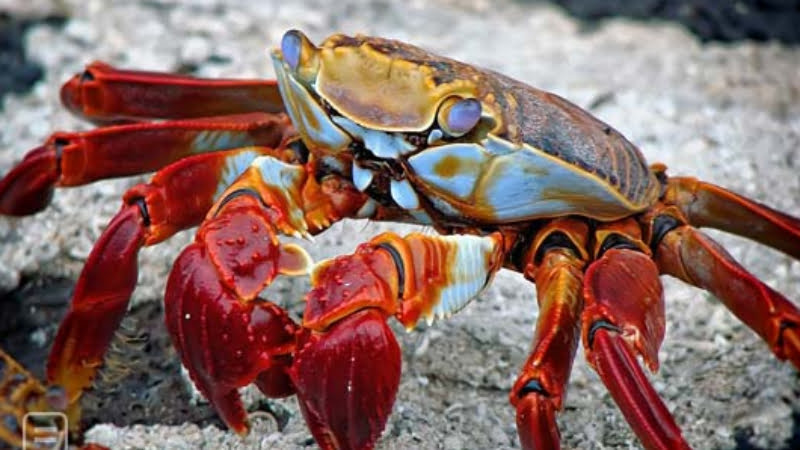 You are probably wondering why we are talking about crabs today. The truth is, there are many things that you may not know about these little creatures. For instance, have you ever considered the idea that they are smart? Do they even qualify as intelligent animals? Well, crabs are smarter than originally believed!

In this blog post, we will analyze 5 facts about crabs to make clear the question “Are crabs smart?”

Crabs Are Capable Of Knowing Their Way Around Complex Mazes

The crabs are able to remember how to navigate a maze for a period of up to two weeks. The research demonstrates that crustaceans, including crabs, lobsters, and shrimp, are cognitively capable of complex learning despite having brains considerably smaller than other animals.

According to Edward Pope at Swansea University, UK, crustaceans have a brain that is roughly 10 times smaller in neuronal count than a bee’s.

A group of scientists led by Pope trained 12 shore crabs (Carcinus maenas) to swim through a maze that was buried underwater in an aquarium. There was only one correct way to get out of the maze, which required five different directions and included three dead ends. Especially, the researchers decided to offer a single crushed mussel at the end of the maze as a reward for completing the maze.

Every week for four weeks, the crabs attempted to navigate the maze. It took them until their third week of training for them to successfully complete the maze without errors, although they improved with each training regimen. Following that, Pope and his team waited two more weeks before assessing the crabs’ memories.

Once again, the crabs were put in a maze, but this time they were not given food rewards. Within 8 minutes, all 12 of the participants completed the maze. Untrained crabs, on the other hand, took only seven crabs out of 12 to complete the maze in under an hour, taking an average of 39 minutes.

Crabs can learn a maze, which is interesting, but their learning speed is slower than rodents or other mammals, says University College London’s Neil Burgess.

Pope says his team next wants to investigate how changing ocean conditions, such as ocean acidification and rising temperatures, might impact the crabs’ ability to learn.

In comparison to other crabs, the Chasmagnathus granulatus leads a simple existence. Burrowing for food and trying to evade the seagull is what it does most of the day. However, recent studies have shown that despite its primitive brain, the crab has highly sophisticated memory abilities. They can, for example, remember where a seagull attacked and avoid that area in the future. It’s a common belief that this kind of behavior takes multiple brain regions in mammals, but scientists found that this crab can do just fine with a few neurons.

Argentine scientists tested crabs’ memory abilities by using cardboard cutouts of seagulls. The crabs were able to recognize the cardboard seagulls and recognize that they were nonthreatening, regardless of where they appeared — suggesting that they could apply learned knowledge. The crabs also retained this information for a long time after the training session ended. In fact, they were still able to recognize the cutout 24 hours after the training, which is a clinical benchmark for long-term memory in most animals, including humans.

The scientists found that crabs exhibited certain behaviors because they have giant lobula neurons, a type of brain cell found in crustaceans. When the crabs become used to the cardboard seagulls, these cells become less active. In addition to these neurons, researchers believe another type of cell handles information about context, such as the environment, and that these neurons just store information about stimuli such as seagulls.

Julieta Sztarker, one of the study’s authors, says that although these animals lack millions of neurons, they can still handle complex tasks. It may be easier for researchers to understand how the memory system in humans works if they can gain a better understanding of how it works in the simplest of animals, says Sztarker.

3 Other Things Show The Intelligence Of Crabs

Crabs are capable of learning from their mistakes

Crabs can learn from their mistakes and retain the information so that they don’t repeat the same mistake again in the future, and they are capable of adapting to changing environmental cues. The researchers in one experiment moved a screen above the water so as to simulate the cues of a seagull or any other predator flying above crabs while they were in the water. For the first few repetitions, the crabs tried to run into their burrows, but after repeatedly running in their burrows, they learned that darkness did not equal danger, and declined to flee.

Crabs have the ability to sense pain

Research indicates that crabs are able to detect pain, as well as have good senses of sight, smell, and taste. Crabs have two main nerve centers that are located at the front and rear. Like all animals who possess nerves and senses, they feel pain from physical harm. According to Professor Robert Elwood, a professor of animal behavior at Queen’s University Belfast who has studied crustaceans for decades, “Denying crabs feel pain because they have different anatomy from mammals is like denying they can see due to their lack of visual cortex.”

Bromeliad crabs, which live in small pools of water within bromeliad flowers, take excellent care of their young. A crab’s mother continues to feed and care for her offspring for several months after they are born. Keeping their children comfortable and clean is a top priority for them. St. Blair Hedges, a biologist who has studied the manner in which crabs care for their offspring, says, “A mother crab manipulates water quality through removing debris, adding oxygen to the water, and buffering pH levels with empty snail shells.”

In addition, research has determined that crabs live by the philosophy “Love thy neighbor”. Whenever an intruder attempts to take over a male Australian fiddler crab’s burrow, his male neighbor can be found leaving his burrow to help fight the intruder off.

Do crabs have feelings?

Yes, they do. Research has shown that crabs are capable of sensing pain as well as seeing, tasting, and smelling.

Do crabs have brains?

This discovery demonstrates that crustaceans, like crabs, lobsters, and shrimp, possess the cognitive capacity for complex learning, despite the fact that their brains are smaller than many other animals.

Yes, they do. We could find the answer by reading the experiment below:
New research conducted by Swansea University demonstrates how shore crabs know the route to a complex maze and can even remember it. Learning how spatial learning works in crustaceans helps us to understand the extent to which animals possess this capability.
In the study, 12 crabs were tested over a four-week period with food placed at the end of the maze each time. Five changes in direction and three dead ends were involved in getting to the end of the maze. During the four-week period, the crabs steadily improved their efficiency in both times spent finding food at the end of the maze, as well as the number of wrong turns they made.
A surprise and even bigger sign were how well they remembered the path when they went back to the maze two weeks later. In fact, all of them reached the end of the maze in under eight minutes even without food at the end. In the one-hour study period, new crabs that had never been in the maze before took much longer to reach the end, and some crabs failed to reach the end at all.

Generally speaking, intelligence is hard to measure, especially in animals that do not speak and do not have extensive body language, like crabs. It may have crossed your mind as an owner whether crabs are intelligent. In general, although the term “intelligent” may not be the most appropriate one to describe hermit crabs, they are far from dumb.

I do hope that my article can help you make clear the answer to the question of whether crabs are smart or not. Thanks for reading and wish you find my post informative!