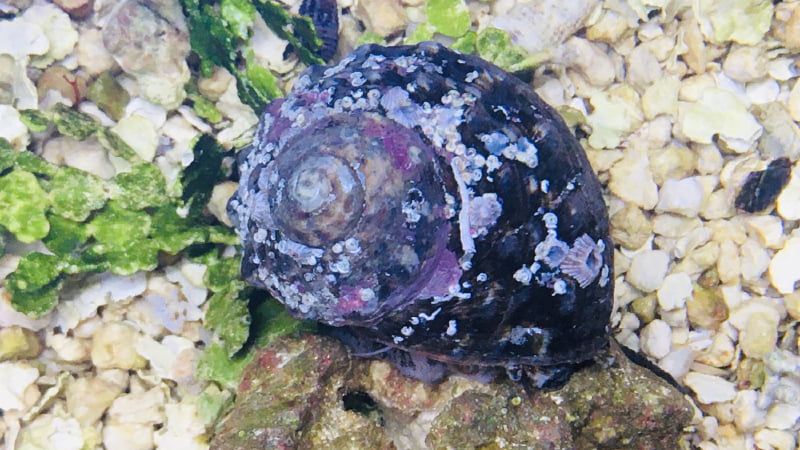 In the hobby of saltwater aquarium keeping, Mexican turbo snails (Turbo fluctuosa or Turbo fluctuosus) are among the most popular snails. Aquarians most often keep them as clean-up crew members and they are highly valued by them for the service they perform.

How Many Turbo Snails Per Gallon?

If you’re buying them for algae control, it’s best to keep 1 Turbo snail per 5-10 gallons. As mentioned, Turbo snails are voracious eaters, they eat algae or vegetable wafers. Obviously, it will depend on the conditions of the tank and the number of algae present in the tank.

If your current amount of Turbo snails cannot control the rapid growth of algae, you can keep 1 Turbo snail every 1-3 gallons. But personally, I think that’s a bit too much. Be careful when deciding to add too many Turbo snails because their appetite is very large. They can starve if they don’t have enough food.

In addition, the Turbo Snail is quite large compared to other algae-eating snails such as the Cerith snail and the Astrea snail, which can be difficult for them to get into small places. So, if you want your tank to be clean of algae, even in small places, you can check out Cerith snails or Astrea snails.

I have found that it is both very easy and very difficult to keep Mexican Turbo snails at the same time. In order to provide them with the ideal environment, you do have to take into consideration some specific requirements. A Mexican turbo snail cannot survive well in a saltwater aquarium with high temperatures since these creatures are not adapted to high temperatures. Moreover, they are also incapable of withstanding high levels of poor husbandry due to their narrow tolerance range.

It is important that Turbo snails are kept in a large, established tank with enough space and water volume to support its needs. These snails require a minimum tank size of 10 gallons (40 liters). It is always better to have a large tank than a small one.

If you want to use either sand or small gravel as a substrate, you can use either. Mexican Turbo snails prefer living in intertidal sandy-bottom substrates in their natural environment in order to survive. Sand, then, is one of the best substrates suitable for these organisms. Additionally, these snails are also very good at helping the substrate to aerate.

It is recommended that you include a lot of live rock in the tank for the Turbo snails to graze on and also so they could use them as hiding places.

There is no need to use fancy filtration and lighting for them. If you are just interested in getting a regular LED aquarium light, you can just buy one.

However, Turbo snails are not very hardy and quite sensitive to changing habitats. It is therefore extremely important to acclimatize them before introducing them to your tank.

How many Trochus snails make a gallon?

For every gallon of system volume, there is a recommendation of one to five individual trochus snails, depending on factors such as the degree of algal fouling and the speed with which it needs to be cleaned.

Do you need to feed turbo snails?

A turbo snail is most commonly used for the purpose of controlling algae. Turbo snails will be happy only in aquariums with much live rock and light algae growth for them to eat. In the event that the algae run out, you will have to provide supplemental food.

How big do turbo snails get?

4 inches. These snails are characterized by spiral-shaped, domed shells that rarely grow bigger than 4 inches in size.

Turbo snails are one of the best algae eaters in the cleaning crew that you should add to your tank. As for how many turbo snails per gallon, it depends on many factors such as the amount of algae in your tank, the condition of your tank,…But ideally every 5-10 gallons contains only one snail. Set up your tank according to the requirements we have mentioned so that you can properly keep them