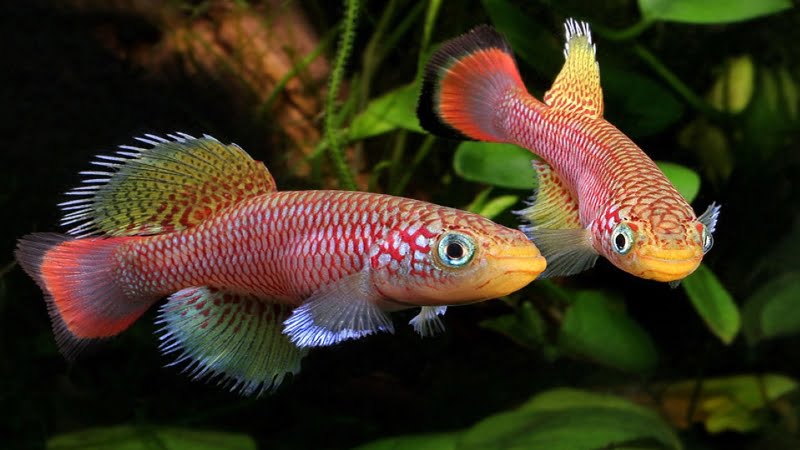 If you wonder how many killifish should be kept together, you are at the right place. Killifish might not be as famous of an option as swordtails, guppies, or bettas, but this species makes a great community fish.

Due to their territorial traits, killifish might not cohabitate well with certain fish types. They can even get violent towards each other if they are males. Allow me to show you 5 aspects you have to consider to decide the number of fish you should keep, and 5 tips on how to care for killifish in general.

5 Details To Decide How Many Killifish Should Be Kept Together

For me, there are 5 details that hobbyists must pay attention to decide how many killifish should be kept together.

What is the tank size that you are going for? Are you looking for a 5, 10, or even 30-gallon tank? A small tank may appear too “restrained” and cause a ruckus if the population is dense. My advice is to always opt for a bigger tank, just in case the fish breed and there isn’t enough space for them to hatch and grow up.

Do you use a heater? Are you adding new plants, sand, or decorations to the tank? If the answer is yes, my advice is that you check how much space they will occupy and pick a bigger tank.

For example, you plan to have 5 adults least kill fish, which grows up to 1.5 inches only. So the total mass of the fish will be roughly 7.5 inches. And we know that each inch needs 1.5 gallons of water to swim freely. In this case, we need at least an 8 to 10-gallon tank. But, this is an entirely empty tank with no filtration system, no heater, no greens, nothing. We have to calculate them well to avoid overpopulating the tank.

Young fries are smaller than adults, and the bad thing is that killifish feed on any tank mate that is smaller than them. So if you have a tank of killifish, make sure that those of the same growth stage, like fry or adult, live together while the smaller or bigger ones have their own separate tank.

To avoid aggression among members, it’s advisable to have a male to female ratio of 1:3. If there are too many males and few females, the males will become hostile and fight for sure. Killifish are best kept in a group. So, if you will want at least 4 killifish in the tank and want them to breed, 1 male with 3 females is the best option.

Killifish can leap relatively high and are highly active fish. It is good to put a lid on the tank to prevent them from jumping out of their tanks and possibly causing death.

Killies are a beautiful species of aquarium fish. They are small and peaceful, making them a great addition to any aquarium. They have various needs in terms of living environment that we need to fulfill. However, when it comes to sharing rooms with others, killifish are best kept alone in a single-species tank. Bettas, angelfish, or swordtails, combined with killifish, will make life in the aquarium a living hell.

5 Tips To Care For Killifish In Your Aquarium

There are 5 tips that I hope you will remember when it comes to taking care of killifish: water temp, pH level, diet, water hardness, and tank mates.

Water temperature will vary depending on the species of killifish. However, most killifish should have water temperatures between 72 and 75 degrees F. Aquarists often use heaters to keep the water at the right temperature if the room temperature isn’t up to par. This is common for those who keep tropical or subtropical fish as pets.

Keep in mind that heaters are crucial in keeping aquarium fish, given that the temperature changes very quickly and we aren’t always there to check on the fish. During winter, there is no doubt that the room temperature will lower, leading to the obligation to use heaters anyway.

While each species has its preferred water conditions, most hard water-killifish can survive in water pH levels between 6.0 to 7.0. This will help decide how many killifish should be kept together.

Some killifish prefer live food, while others can thrive on frozen food. Aquarists should not use one type of food because it can cause nutritional deficiencies.

The most popular foods for killing fish include brine shrimps and daphnia and larvae of mosquitos and microworms. The killifish don’t eat vegetables like plants or algae because they are carnivores. However, they will eat most of the typical “meaty” choices for community fish.

Killifish are also cannibals. They can also change their gender and have the reproductive tools for male and female killifish. They can produce eggs by themselves and eat the eggs later if they don’t have enough food.

The water hardness of Killifish ranges from 120 ppm to 160 ppm. You can soften aquarium water by decreasing the amount of dissolved calcium and magnesium, and vice versa. These adjustments should be made before the fish are added to the tank to avoid any environmental shocks that could cause death. It’s very straightforward to change water hardness for your killies for a home aquarium.

Killies make a great aquarium fish species. They aren’t large and should not be paired with aggressive and larger fish like swordtails, angelfish, or bettas. They have different environmental requirements and belong to distinctive fish families, leading to a problematic population control situation in the tank. In general, when you keep killifish as pets, you should keep them in a single-species tank.

If you pick other species to accompany them, I suggest that you select those of the same size. Due to their territorial traits, killifish will eat those that are smaller than them, including their fries.

Video: Killifish Beginner Care Guide | Get To Know The Killifish

How many killifish can you have in a tank?

Technically, you can keep as many killifish as you like in a large enough tank. However, male killifish can be aggressive towards other males, especially during mating season. If you have multiple killifish, such as four, there should be one male only. But, generally speaking, for each fish we need 2 gallons of water to avoid making them feel trapped.

Do killifish need to be in pairs?

No, it’s not necessary, especially when you don’t intend to breed more for commercial purposes or expand your killifish tank’s population. In any case, it’s not recommendable to keep killifish in pairs of 1 male and 1 female. The females in the tank should always surpass the males by number.

How many killifish can you have in a 10-gallon tank?

It depends on the size of the killifish. For those that can grow to about 2 inches in length., an aquarium that is 10 gallons in size and 2 inches deep can house a maximum of five killifish. You should limit your choice to five killifish, as the tank may have decorations. A killifish should not exceed two to four in a 10-gallon aquarium.

Do killifish need a heater?

Most Killifish prefer water temperatures between 72 and 75F. If your room temperature is lower than this, you’ll need to heat your tank. It’s true that most fish can adapt to a drop in water temperature, but maintaining a constant temperature for your killifish will reduce stress for your beloved water pet.

Can male killifish live together?

Yes, they can, as long as there isn’t any female in sight. Any community fish can get violent when they have to compete for a chance to mate, and male killifish are aggressive when the time comes. That’s why it’s recommended to have more females than males.