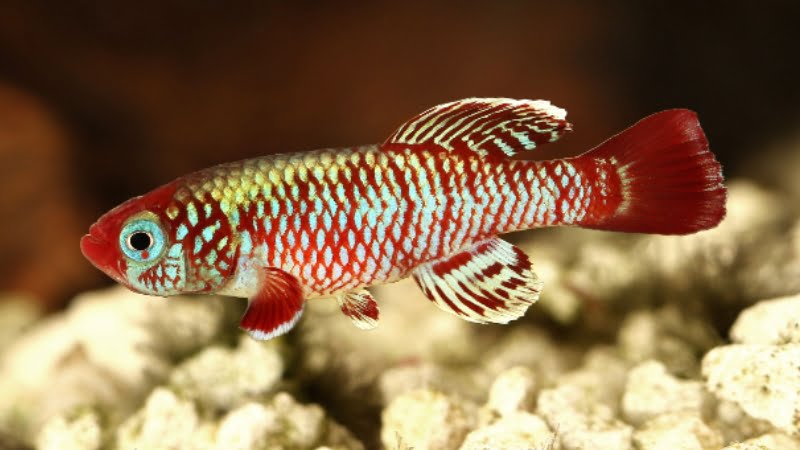 We all know that hard water killifish require an optimum brackish environment to thrive the best. This tropical/ sub-tropical fish originally came from the harsh wilderness but had been needing more attention ever since aquarists and hobbyists started to breed them on a massive scale.

Let me introduce you to 3 primary pieces of info about hard water killifish: their appearance, behavior, and living conditions.

Unlike many aquarium fishes, killifish aren’t as colorful. However, aquarists still find this one of the most bizarre options for a community tank due to its “exotic” nature. Find out simple information about this species below.

Hard water killifish have an elongated and slim body shape and a flat belly, resembling a tube shape. There are many killifish species, each with its own unique characteristics. The length of the killifish can vary from 1 to 6 inches. The least killifish is the smallest breed that only grows up to 1.2 to 1.5 inches.

Many aquarists say that the small killifish are more peaceful than the big ones, and this species is pacific in general. But from my experience, the size doesn’t 100% determine the behavior of this species. It depends a lot on the breeds and the tank mates. For example, least killifish are quite gentle towards each other, but if they live in the same tank with cherry shrimp, they can get violent.

The average life expectancy of killifish is 3-4 years. Some even live to 5 years. One may only survive for 1-3 months if the living conditions are poor. It also depends on the breed in this case. If we are talking about mangrove killifish, they can survive a good 3-year to 4-year lifespan, given that they are used to a harsh living environment.

Unlike swordtails, guppies, or molly fish, male and female killifish are pretty similar in size. The males are even bigger sometimes.

Killifish are very active fish, and they can jump relatively high. Due to this fact, it’s recommendable to cover their tank with a lid to prevent them from jumping out and potentially killing themselves.

Killies make a great aquarium fish species. They are small and can be a peaceful addition to your aquarium. They have different environmental requirements. But, in general, it’s best to keep only killifish in a tank instead of mixing them with other species. Angelfish, swordtails, or bettas will make horrible mates for killifish.

How To Adjust Water Hardness For Killifish

Killifish live with a water hardness that varies between 120 ppm and 160 ppm. Aquarium water can be softened by decreasing the amount of dissolved calcium or magnesium. This can be done by chemical filtration, deionization, or peat/driftwood water softening.

You can, however, increase the aquarium’s water hardness by adding crushed coral to hard tap water or using remineralization products like Seachem Equilibrium. To avoid killing the fish due to shocks in environmental changes, it is best to make these adjustments before adding the fish to the tank.

How To Customize The Tank Conditions For Hard Water Killifish

I want to mention 4 crucial tips that hobbyists and aquarists must remember to provide the best living conditions for their killifish.

Since killifish tend to jump above the surface, they are always at risk of jumping outside of the water body and falling somewhere else. Of course, not all killifish breeds can live outside of water. Mangrove killifish are the exotic and bizarre ones that can do so. If you want to avoid the situation, try to cover the tank entirely without leaving any split.

You can add tools that provide extra oxygen to the tank to avoid sickening the hard water killifish. Even though this can be hectic and requires more effort, it’s best to carry out the process to avoid losing the fish due to jumping.

Many killies come from streams that flow through the forest, which are protected from direct sunlight and do not enjoy bright lighting. Plants can provide shade for killies in brightly lit aquariums.

Many killies prefer light that comes from the top of the tank. This is because it can be covered more or less by plants and dimmed by them. Many killie fans use ceiling lamps to illuminate their tanks. If intense lighting is needed, they will only increase the light position variety.

While killifish are often bred in soft-acid waters, many are now captive-bred. Research the killifish thoroughly before purchasing it will help you know the best pH level that it needs. This will allow you to find out the conditions they were raised.

Although the preferred water conditions vary depending on the species, most hard water killifish can thrive in an acidity level between 6.0 and 7.0.

Like any aquarium with community fish, it’s best to provide hiding spots if a male or female killie appears to be more aggressive towards other tank mates. It’s best to use natural plants where the fish can lay eggs. Fertilized eggs have a sticky membrane outside of them, which sticks to the leaves of the plants. This will help you detect bad ones easier and remove them from the tank before contaminating water cleanliness.

What are the best places to buy killifish?

Many online stores sell killifish. They can also be shipped to different states around the US. It would not be easy to find a local store. Aquabid, Aquarium Fish Depot, and Arizona Aquatic Garden offer killifish in unique designs and live fish shipping service. If you are interested in bidding on an excellent killie, American Killifish Association is also a good place to do it.

This is an exotic killifish breed, but mangrove killifish can climb mangrove trees for real when the water level diminishes, and they are forced to go above the surface to protect themselves. These buddies can live outside the water for over 2 months. Up to date, this breed hasn’t been exploited for commercial purposes.

What aquarium fish do well in hard water?

Most fish are able to adapt to hard water, except for sensitive species that must live in soft water. Livebearers like guppies, mollies, platies, swordtails, and tetras live in hard water. Most breeds of killifish and rainbowfish require the same environment as well. Some even prefer brackish water.