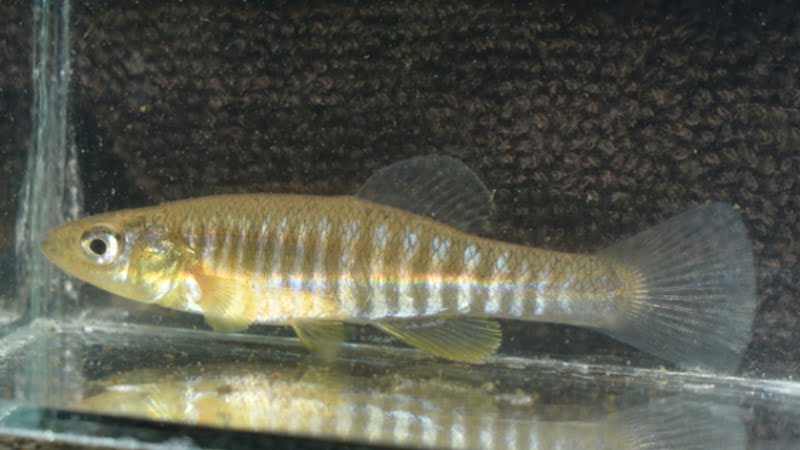 But why is this specific breed is endangered? How do they live in their natural habitats? Are you interested in getting to know the details with me?

GPlease get to know 3 exciting pieces of information about eastern banded killifish with me.

For community fish, I find banded killifish to be quite large in size. Banded killifish is a small shoaling fish that can reach from 4 to 5 inches in length. Like many other fish species, female banded killifish tend to be longer than their male counterparts. As for the body shape, killifish are famous for their tube-like, slim, and long body.

Eastern banded killifish isn’t very colorful, but the stripe pattern sure adds uniqueness to its appearance. Along the body of this breed, we can see numerous verticle stripes in metallic silver or black color. The number of the stripes varies a lot, so there doesn’t seem to be any genetic rule that determines the exact number. However, we should be able to spot from 10 to 15 rays.

Origin Of These Killifish

Like most killifish breeds, Eastern banded killifish can jump above the water surface. But unlike some breeds that can survive outside of the water body, like mangrove killifish, the banded breed will die off if not get back to the water after jumping.

If you are keeping this type of killifish, it’s highly recommended to cover the entire opening of the tank. These fishes can even fit through tiny holes. So if the lid isn’t solid, they might jump outside through the splits.

In 1989, the Illinois banded killifish was classified as endangered due to its restricted habitats and low population. Up to date, this breed’s scarcity still remains the same as before, which means that eastern banded killifish are rare. They shouldn’t be exploited for commercial purposes, aka remaining non-game.

There are about 236 breeds of killifish that aren’t exploited for commercial purposes, among a total of 1,270 breeds.

Fish scientists and fish enthusiasts have long been fascinated by the biology of killifish. However, human encroachment and habitat loss contribute to a decline in the killifish population in the wild. Aquarists can still purchase killifish from farms and breeders, but finding a natural killifish is exceptionally challenging and isn’t recommended.

Is a killifish a community fish?

Killies make a great community fish. They can live with small, peaceful fish like neon tetras or rummy nose tetras that require the same water conditions. Fishes like angelfish, swordtails, or bettas are mostly bigger than killifish and will make horrible tank mates.

Where do eastern banded killifish live?

Eastern banded killifish come from and live in eastern North America. This is where aquarists can commonly find killifish in their natural habitat. Newfoundland and Labrador is the location where this species spawn the most.