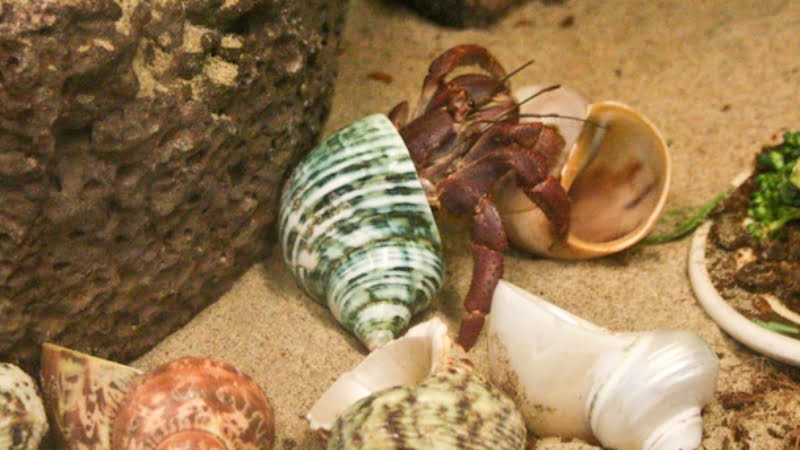 Hermit crabs, although called crabs, are actually more closely related to lobsters than true crabs. Hermit crabs spend most of their lives living in shells. As for snails, they grow a shell of their own. So, do Hermit crabs and shells grow together? Do saltwater hermit crabs need bigger shells when they grow? In this article, I will answer that question and also help you choose the right shells.

Unlike snails that grow up with shells. Hermit crabs will move from one shell to another. That is also the reason for their name. The crabs will move into slightly larger shells as they moult and have outgrown their current shell. But there are also some crabs that like to switch between shells daily. Give your hermit crabs a variety of shells so they can switch when they want.

Hermit crabs in their native habitat can sometimes be very aggressive when fighting for new shells. In some cases, a hermit crab will actually kill a snail or another crustacean simply for the purpose of taking over its shell.

How To Determine The Proper Shell Size

Measuring The Diameter Of The Opening

First, you need to determine the longest diameter of the opening. Then use a ruler to measure this size. However, the shell is quite small, so a regular ruler will not be able to measure it accurately. You can instead use a shell calliper to get a fairly accurate measurement.

You also have to determine the size of your crab.

Once you have determined the size of your crab, select a few shells that are 1/8- to 1/4-inch wider than the hermit crab’s current shell.

If you find the measurement too difficult and complicated, you can purchase packages with various sizes of shells. At that time, Hermit crabs will choose a shell of the right size for them.

However, individual shells in a package are not labelled with measurements, so buying shells this way will not give you an idea of the size of the crab – so you will face the same situation for future purchases.

Video: All About Hermit Crab Shells

How do I know if my Hermit crab needs a bigger shell?

Lift both the crab and the shell at the same time. Hold the crab so that the opening of the shell is facing the ceiling. As a way to defend itself, your crab will sink back into its shell. If it doesn’t retract its legs into the shell, it could signify that the shell is a bit cramped inside. This means your crab has outgrown their current shell and needs a new shell.

Can a shell be too big or small for a Hermit crab?

Shells that are too big or too small are unacceptable to the crab. As a result, in this market, the hermit crab’s preferences are incomplete. Among the shells within its range, hermit crabs will probably prefer the shells on the larger end so that they can get the most use out of that shell.

Can a Hermit crab live without its shell?

It is crucial to keep appropriately sized shells in your hermit crabs’ tank so they have the opportunity to try out new homes. I hope this article has helped you to select the correct shells for your hermit crabs.