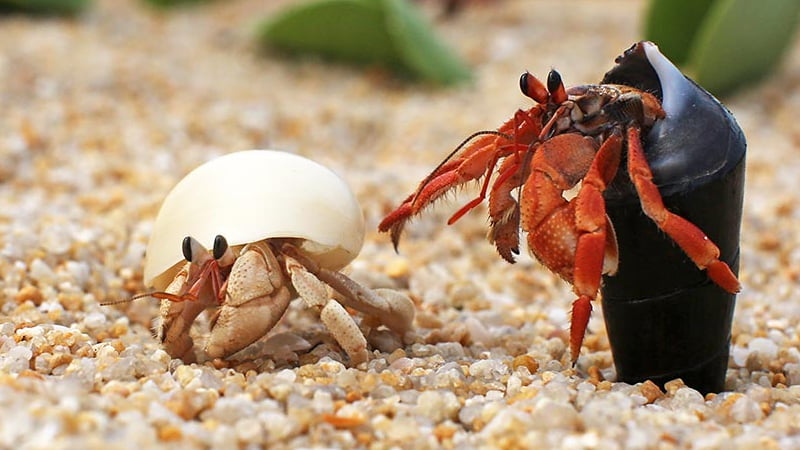 Hermit crabs are a great creature to add to an aquarium. It can become the aquarium clean-up crew or simply give your aquarium a unique look.

However, adding crabs to your tank for any reason requires knowing some of their unique qualities, attributes, and habitat requirements. One of the important things is to know how much space they need in the aquarium

So this article will take an in-depth look at how many hermit crabs per gallon.

How Much Space Should Each Of Your Crabs Have In A Tank?

If your aquarium is large enough, you can keep many hermit crabs of various sizes together. For example, you can easily put 10 tiny, 6 medium-sized or 4 large Hermit Crabs in a 20 gallon aquarium.

How Many Hermit Crabs Per Gallon?

The general, a 1-gallon tank is suitable for 1 Hermit Crab. A Hermit crab that requires a lot of space, such as a Jumbo, should not be kept in a 1-gallon tank.

However, the space requirements also depend on many factors such as: the size of the Hermit Crab, the type of hermit crab, the degree of aggression of the crab, …

Deciding The Number Of Hermit Crabs

Everyone has different opinions on how many crabs you can put in a certain sized tank. Here is a guide that is pretty much accepted by Hermit crab owners:

To decide the number of Hermit crabs per certain size, you should ask yourself these questions.

1. Does your hermit crab have an area to go into in order to escape the stresses of captivity?

Many animals need hiding places and areas in their habitat to not feel stress and feel comfortable. If you have a tank that consists of a substrate, bowls, plates and no barrier from bright light and shadow, with no place for them to hide, then it is likely that they never really relax, they do not do as their actual behavior.

2. Does your tank have enough room for a molting-friendly area?

When molting, Hermit Crab needs a peaceful space. So you need to determine if your tank has enough room for each Hermit crab to molt in peace without being disturbed by crowded tankmates? They will find their own place to hunker down and sleep or molt.

4. Does your tank have enough space to facilitate Hermit crab climbing, play, and exercise?

Answer the questions above to see if your tank meets those requirements before calculating how many hermit crabs you can fit within the tank.

How many Hermit crabs per 10 gallon tank?

For a 10 gallon tank that may be 10 tiny crabs, 6 small crabs or 4 medium crabs or a reasonable combination of the above. You can keep hermit crabs of different sizes together as long as your substrate depth accommodates your largest crab being able to completely bury when he needs to molt.

Can 2 Hermit crabs live in a 10 gallon tank?

A 10-gallon tank can hold 2 crabs. However, it also depends on their size. Large and jumbo Hermit crabs cannot be kept in a standard 10 gallon tank because it is not deep enough to hold the 8-12 inches of substrate depth needed to molt.

Do Hermit crabs do better in pairs?

They need friends! Despite their name, hermit crabs are social creatures and ideally need to be in pairs or groups.

The answer for the question “how many hermit crabs per gallon” is 1 Hermit crab per gallon in general. And you also have to be aware of other requirements when deciding the number of crabs per certain size.

Above is a guideline that is pretty much accepted by Hermit Crab owner. It’s the guideline I still use now, and hopefully will be a help to you.