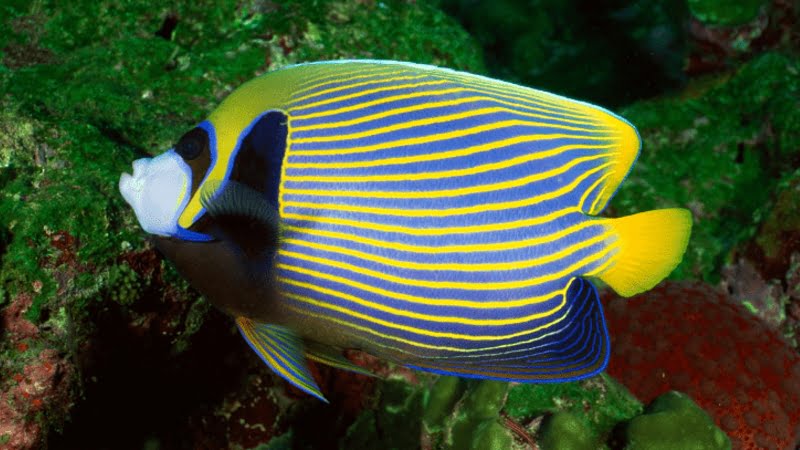 If you wonder: “do angelfish eat algae?” the answer is yes. But, we have to consider if these aquarium greens are good for angelfish’s diets or not. Is it beneficial to let algae grow freely in the tank just because we know that some of our fish pets eat it? You can find everything you need to know about angelfish eating algae here in Aquarium Circle.

Angelfish Eating Algae: Yes Or No?

Do angelfish eat algae? Yes, angelfish can and will eat algae that develop in your tank due to weak water filters or infrequent tank cleaning and water change. These fish are always hungry, so you can expect them to feed on the plant constantly. This is a good way to keep your tank clean without committing too much to the cleaning.

However, I don’t recommend abandoning the tank and letting the fish eat algae without adding more proteins and vitamins to their diet. Not only will this put the fish in bad shape, but it will also contaminate the tank and permit the development of tons of parasites and bacteria. It’s okay allowing angelfish to eat algae, just not too much.

Will Angelfish Get Sick From Eating Algae?

Balance is the key. On a good note, algae can reduce nitrogen compounds which could be harmful to fish. And since algae spread on its own, fish in the tank can always feed themselves if they are omnivores.

However, leaving the tank dirty with algae for too long will throw the water parameters off, which results in sick fish. Also, algae can die just like any other plants that don’t receive proper care. And when it dies, the harmful compounds that it has absorbed beforehand will be released in the water again and may cause a sock to the angelfish because of sudden changes in the living environment.

What Kind Of Algae Do Angelfish Eat?

There are 4 kinds of algae that can be find in most aquarium or ponds that angelfish eat. What are they? You can find out with me below.

Slime algae are among the most common algae types in home aquariums, and angelfish will gladly costume it. However, it causes excess nitrate and phosphate in the water of your tank. It can grow rapidly and is difficult to manage once it starts developing. The odor of this algae is not the most comfortable to handle. And most will say that cleaning these algae are the yuckiest.

The filamentous algae are colonies of microscopic algae that join to form a single mesh-like panel of algae. These algae develop and spread very quickly, growing upward to the surface. Just like with other types of algae, I don’t recommend having an excess amount of it in the tank. Angelfish can eat it, but controlling the food source will benefit their health.

Have you observed any algae in your aquarium that resembles hair? If so, it’s most likely that it’s brush algae you’ve observed. It is often seen on plants, especially near their edges. It’s not the case that all fish take this. However, you shouldn’t be shocked when your angelfish eat it.

Green spot algae spread very quickly over the glass walls of the home aquarium. Angelfish enjoy eating these algae, but due to its crazy spread, they may not be able to consume them all before the tank is dirtied with it. Thus, I suggest cleaning these algae soon when you spot them.