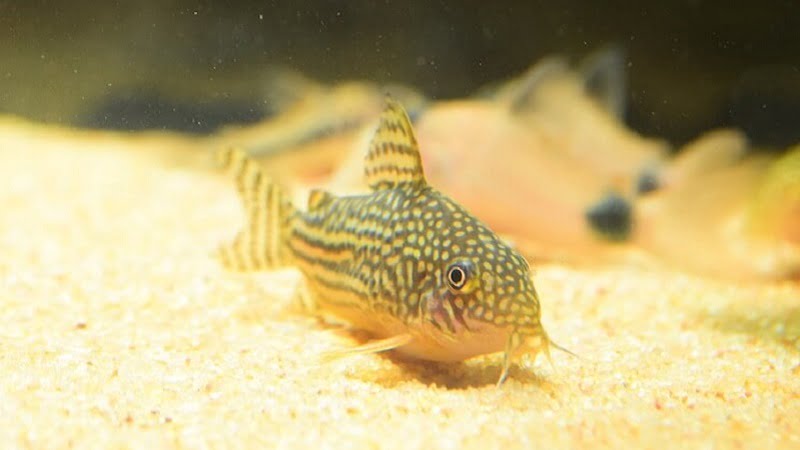 Cory catfish eyes bulging is also called the “popeye” in catfish. If this symptom is in a severe state, your cory catfish will lose their sight.

This article will give you the cause of cory catfish eyes bulging or popeye disease, what treatments should be taken and what protocol should be followed to prevent this.

Eyes bulging in cory catfish usually refer to popeye – a common eye problem in aquarium fish and a symptom of underlying infections and diseases. The medical term for this eye problem is Exophthalmos.

The bulging eyes in cory catfish can be either unilateral or bilateral, meaning this can affect one or both eyes of your fish. Unilateral popeye is commonly caused by physical damage to the fish, whereas bilateral popeye is often a reaction to poor aquarium water conditions.

The causes of popeye in catfish often include trauma resulting in physical injuries, internal swelling, infections, and poor water quality.

Fish usually do not have eyelids, so their eyes are sensitive and easily get injured when bumping into tank decorations or other fish in the aquarium. It is especially true if one fish exhibits popeye in a community aquarium.

Your fish may have scraped its eye against abrasive objects in the tank or fought with another fish, resulting in a swollen eye.

In most cases, when physical injuries cause the popeye, the protruding portion will gradually recede as soon as the eyes heal. It is still necessary to closely monitor the fish because eye infections can occur, leading to blindness in the injured fish.

Different types of organisms, including bacteria, fungi, and parasites, are capable of causing infection.

Often, infection-induced popeye will affect both eyes rather than only one eye in your cory catfish. Swelling behind the eye can occur in fish suffering from some other diseases, like dropsy. When you notice your cory catfish have bulging eyes and dropsy, your fish is probably seriously infected.

It may be hard to detect popeye caused by an infection at first, but gradually this condition worsens. One of your fish may be affected initially if there are multiple in your tank but the infection will soon spread to other fish mates.

Thus, if you notice cory catfish eyes bulging, test your water to find out if something is wrong with the water chemistry. Be aware of gas supersaturation in the water, which is visible as bubbles on the sides of the aquariums and even on the fish’s skin, since gas can accumulate in the fish’s eyes and result in swelling.

The problem of cory catfish eyes bulging can also result from internal problems, such as kidney failure or a metabolic issue, or tuberculosis, because these problems cause the fluid to build up in their body.

Like other freshwater fish, the cory catfish’s gill and kidney play an important role in removing excess water that they have taken in. If their kidneys or gills malfunction, the body will store water, resulting in surplus moisture. The fluid can accumulate in the tissues behind the eye, causing it to stick out.

Identifying and correcting the cause of kidney or gill dysfunction is crucial before treating popeye because eye bulging is a secondary clinical sign.

It can be difficult to detect popeye in fish before it causes significant damage, as its early signs are subtle. Here are some possible symptoms of the popeye condition in your cory catfish.

Bulging on one or both eyes

Initial protrusion of the eye is usually slight in one or both eyes. A fluid bag may also appear behind the affected eye as the condition progresses. At this stage, the eyesight of your cory fish is not affected yet, so it will continue swimming around normally.

Discoloration of one or both eyes is also a sign of popeye. Especially, the eyes of a fish suffering from popeye could appear cloudy and milky. However, a discolored eye may also signify other problems and diseases in cory catfish, especially if swelling is not accompanying it.

Some fish suffering from popeye will also have bloodstains in the affected eye in addition to protrusion. These bloodstains typically occur due to extreme eye swelling because a huge volume of fluid behind the affected eye ruptures the blood capillaries in the region. In some cases, blood infiltrates the cornea, making their eyes look like being bleeding.

The eye is ruptured or falls out of its socket

Uncontrolled swelling of the fluid bag behind the eye can lead to large swelling and high pressure. The pressure eventually becomes too much, causing the eye to rupture (pop out of its socket). The eye may not be able to be saved if popeye has reached this point. Proper treatment and care will improve the chances of recovery, but their eyes will remain blind.

If your cory catfish have popeye, their behavior will also change, for instance, they might try to hide most of the time. Even their appetite may be affected, resulting in them not eating and losing weight. However, you will see that their bodies got swollen up and their swimming is abnormal.

In general, the treatment for cory catfish eyes bulging from a physical injury, by fighting or accidentally bumping into decorating rocks or woods, is easier and has a higher probability of success than the condition caused by bacteria-related problems.

The best treatment for a fish that has been traumatically injured is good water quality, a nutritious diet, and removing the cause of the injury, if possible.

If your fish’s kidneys or gills are not functioning properly, you will have to correct the issue. Initially, you should check the water parameters to ensure your water chemistry is in the correct range. If any of the parameters are out of range, make plans to correct them. Be sure to correct any pH and temperature issues slowly! When water quality isn’t the issue, contact a professional to solve the problem quickly and effectively.

Good water quality is one of the most important points of successful treatment.

Firstly, you should take all infected fish to another tank with optimal water parameters and start the treatment.

In the main tank, to disinfect the water, you should test the water in the tank. Once high ammonia and nitrate levels are detected, you need to manage this immediately by doing water changes until these parameters are in the correct range.

Why cory catfish eyes bulging is a serious problem?

Cory catfish with bulging eyes become less active and do not show any interest in food. In some cases, fish with unilateral popeye disease can still survive after losing sight in one eye, but it will negatively impact their quality of life. The fish can die if this disease is not detected soon after being caught. Taking care of the fish will become more difficult if they become blind.

In addition, the popeye condition is usually accompanied by other health problems. A weakened immune system can make the fish more susceptible to opportunistic bacteria or fungal infections. Septicemia is responsible for most cory catfish deaths from uncontrolled popeye issues, as it can cause organ failure in different parts of the body.

Popeye can be prevented simply by providing fish with a healthy aquarium environment to limit the stressors that can weaken their immune system. By taking steps to minimize the risk of physical damage, you can also reduce the occurrence of bulging eyes in your cory catfish.

Other fish would not be affected by popeye if it was caused by physical injury. It can be contagious and spread throughout the tank if it is caused by a parasite or bacterial infection.

Cory catfish influenced by popeye can recover well if noticed early and treated accordingly.
When the condition reaches extreme levels, it can rupture the affected eye, making your fish permanently blind and even leading to death by severe internal infections.

API MELAFIX is an effective solution for bacterial infections like fin & tail rot, eye cloud, popeye, and body slime. So, the answer is yes, this product can be used to treat cloudy eyes in your fish.

Physical injuries and bacterial infections are possible causes of cory catfish eyes bulging. This could even be due to an internal problem in your fish, such as tuberculosis. To effectively treat this popeye condition, you should determine the cause, ensure stable water parameters, and apply proper treatment. After all, it is advisable to watch closely to ensure a secondary infection does not take hold and progress extremely.