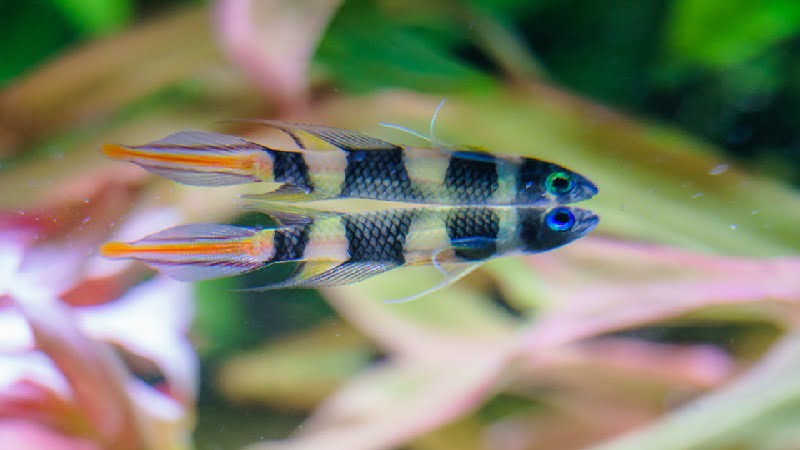 Clown killifish is a type of freshwater fish that are native to Africa. In aquariums, they are popular for their bright colors and patterns. Many people wonder if clown killifish can live with shrimp, and the answer is yes! While clown killifish with shrimp have different needs, they can definitely coexist in the same environment.

In addition to being very gregarious and curious, clown killifish (Epiplatys annulatus) are also highly intelligent. To watch what’s going on in the tank, they’ll frequently come within a few feet of the glass as you pass by. With their bright design and positive attitude, they’ll immediately become a favorite in your tank. Because they are found in slow-moving streams and marshes in Africa, the name “killifish” is derived from the Dutch term for a channel.

Clown killifish have a tendency to keep more of their own kind as tankmates. Their social nature makes them ideal for keeping in schools of at least eight members. During the breeding season, male members of the species will chase each other. It’s harmless fun, though. Clown Killifish prefer peaceful aquarium mates; tetras or minnows are an excellent choice.

Clown Killifish With Shrimp: Is It Possible To Keep Them Together?

Killifish have long, thin bodies and are hardy fish. Some Killifish may grow up to six inches long. However, most Killifish are just a few inches long.

The capacity of these fish to thrive and breed even in harsh circumstances makes them one of the most remarkable fish in the world. While certain Killifish species can’t spawn in ponds or streams that are completely dry for long periods of time, others can.

Among male Killifish, there is a tendency to engage in territorial behavior. Though it might be a challenge, since they prefer to occupy just the top section of the tank, they are simple to maintain. Allowing these other fish species to have their own place in the tank offers a better environment for all fish.

Killifish prefer aquatic arthropods for food. The main elements of their diet are worms, insect larvae, and aquatic crustaceans, such as shrimp.

You might want to consider adding a freshwater aquarium Shrimp if you are looking for something new to add to your fish tank! Meanwhile, freshwater shrimp have become extremely popular among hobbyists due to their ability to eat algae.

Although freshwater shrimp remain active in the aquarium, their small size often causes them to be preyed upon by larger fish.

Accordingly, the harmony of Killifish and Shrimp in the aquarium is primarily determined by their size.

Because Killifish naturally hunt crustaceans and freshwater shrimps are small, it is easy to understand that they would feed on Shrimps due to their instincts.

The Killifish does not harm Shrimps that are only a few inches long! There are a number of 2 to 3 inch long Shrimps that fall into this category: Amano Shrimp, Singapore Flower/Bamboo, Green Lace Filter, and Vampire, to name just a few. Because of their somewhat larger size, these Shrimp species are protected from the Killifish.

Tips To Maintain Clown Killifish And Shrimp In the Same Aquarium

If you follow the proper precautions, it is possible to keep clown killifish and shrimp together. These two types of creatures have different needs when it comes to water quality and temperature, so it is essential to do your research before adding them to your aquarium. With a little bit of planning, you can create a thriving environment for both shrimp and clown killifish.

Size Selection For Killifish And Shrimp

Shrimp larger than Killifish are the safest to maintain, as we’ve already stated. If your Shrimp has the benefit of being larger, the odds of your Killifish attacking your Shrimp are pretty low.

In any case, if you have Shrimp fry in the same tank, you need to get a new tank. First, you may remove the Shrimp from the Killifish so that they can develop on their own.

Plants can keep your Killifish away from most of your shrimp, so you don’t have to worry about them eating your shrimp. If you want to accomplish this with your tank, mosses are the best plants. If you wish to purchase Marimo mosses, which are 100% natural and considerably larger, I recommend them!

Plants populating your tank in such dense numbers will provide a hiding place for your Shrimp, especially the fry. As a result, there is a greater chance for the fry to survive to adulthood!

Ensure A Sufficient Supply Of Food For Killifish

This is a straightforward solution worth noting. For example, if you offer enough food for your Killifish, the odds of them assaulting your Shrimp for food will be much reduced. As a result, your Killifish’s meals to keep satisfied are as follows.

This tactic may have escaped many people’s attention. However, keep more shrimp in your fish tank, and you may start feeling outnumbered by your Killifish. Thanks to this method, your Killifish will be safe from most of your Shrimp.

In the meantime, the following suggestion may be more viable to ensure your Shrimps’ safety!

Transfer Some Shrimp To A Breeding Tank

Your first step must be accepting the fact that larger aquatic species attack their smaller counterparts if your Killifish begins to display predatory behavior toward Shrimps.

In the end, removing some of the shrimp and putting them in a breeding tank is the last solution to the problem. This will allow you to replace those Shrimps that have fallen prey to your Killifish. You may find this harsh, but this is the natural order of things.

Clown Killies attack unsuspecting insects as they float by on the surface, snatching them up in their teeth.

What is the optimal number of clown killifish per aquarium?

Keeping clown killies in groups of at least 8-10 is a good idea since they are social fish. When there is many fish, it is easier to observe their natural behavior than when there are just one or two.

Keeping them in groups of at least eight fish is a good idea, as they are very social creatures. It’s harmless fun for the species’ male members to chase and fight each other.

How to keep clown killifish and shrimp in the same tank is possible with suitable precautions. Both types of creatures need different water quality and temperature. With a little bit of planning, you can create a thriving environment for the creatures. I hope this article is helpful! Thank you for reading!