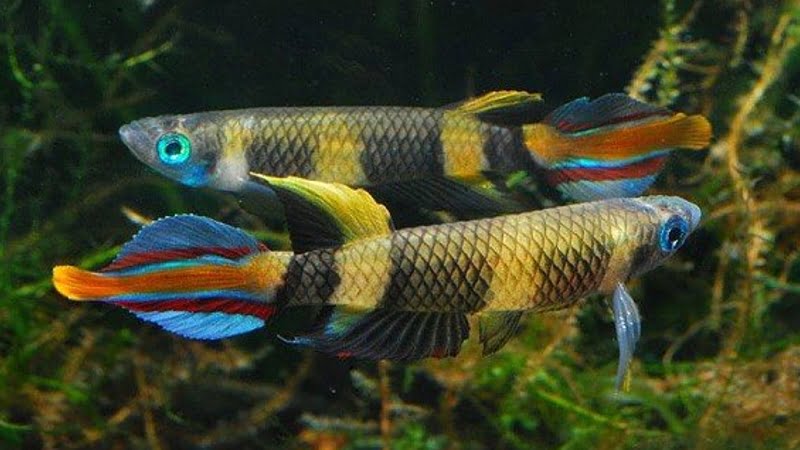 Do you know the reason why maintaining the suitable Clown Killifish Temperature fit their natural environment is extremely important?

Temperature is essential for any live creature but is especially needed for a cold-blooded animal such as Clown Killifish. So, how does temperature make its impact? Let’s see!

Clown Killifish or Banded Panchax, which scientific name is Epiplatys annulatus, are peaceful micro-predators that mostly eat tiny flying insects and invertebrates. It’s usually called Rocket Killifish as a nickname due to its unique colored characteristics.

This fish is tiny at a young age, but it grows quickly. Lowland swamps, slow-moving streams, and small rivers are where they usually live. They also live in open savannah and tropical rainforest areas where it’s found in marginal vegetation or in the water. Perhaps it looks best in many plants or a natural-style arrangement with a sandy substrate and driftwood roots and branches. It would look even more natural if added dried leaf litter, and it would also provide more cover for the fish and help the microbes grow as the leaves break down.

They look a little like bumblebee gobies, but they’re not the same thing. Clown Killifish have small heads with googly, bright neon blue eyes and long, slender bodies that look like clowns. They have four dark stripes on each side of their body, and between the snout and caudal fin, there are cream or yellow bars.

Clown Killifish can have a slightly different color pattern depending on the area they live.
Stressed fish can quickly lose their color. This is especially important during shipment when they look fair-skinned and very unappealing.

Because Clown Killifish is a cold-blooded animal, they can’t make their own heat as humans do, so they have to move to different places to keep their bodies cool. But what if you breed them in aquarium tanks, where their space is even smaller than in the wild? When the temperature changes, they can’t move to another more comfortable place for them. If they don’t get help, they’ll die.

Clown Killies might die from sudden and drastic changes in temperature. The more increase temperature, the more reduction of oxygen content. To maintain the same oxygen levels as when the temperature was lower, they must use a lot of water to pump over their gills. They will die as a result of a shortage of oxygen and a rise in temperature.

Let’s see the detail of the impact on their survival if the temperature isn’t maintained in a suitable range for their lives.

Clown Killifish might die from sudden and drastic changes in temperature. The more increase temperature, the more reduction of oxygen content. To maintain the same oxygen levels as when the temperature was lower, they must use a lot of water to pump over their gills. They will die as a result of a shortage of oxygen and a temperature rise.

A Clown Killi will feed when in warm enough water for its body. Their metabolism, oxygen requirement, and activity will be healthy, encouraging feeding.

Each fish species has particular temperature needs for reproduction. Fish cannot spawn until certain temperatures are met. Clown Killifish requires 68° – 79° F (20° – 26° C). Due to this preference, a sudden temperature change in a body of water might cause Clown Killi to flee or decrease in population.

Clown Killifish are small enough to fit in a micro or nano tank. You can also put them in a larger community tank, though this will make Clown Killifish shy to reproduce. They also dislike strong currents.

A planted tank is ideal for Clown Killifish. The floating plants will help keep the tank clean, provide cover for the fry, and help the shy adult Clown Killifish hide.

The best parameters to fit their native environment are:

Another important note: If you don’t use a filter, you should perform a 50% water change every few days to keep the Clown Killies healthy. Make sure you have enough plants to absorb the ammonia and nitrates.
Suppose you use a filter, place plants or decorations in front of it to reduce direct flow, which disturbs Clown Killifish. You could also choose a low-flow filter that won’t move water too much.

As a natural micro predator, Clown Killies are more likely to prey on aquatic and terrestrial invertebrates and other zooplankton.

Clown Killifish are friendly to other fish, but their small size and specialized needs prevent them from becoming an ideal community fish.

As with many other minor and peaceful species that thrive in similar environments, such as numerous cyprinids, anabantoids, callicthyids, and loricariid species, such small tetras as Ladigesia, Lepidarchus, and Neolebia species make excellent tankmates.

A thorough investigation is necessary before purchasing any cichlid, regardless of the size of the tank.

Since this species is rather gregarious, you should aim for at least eight to ten specimens to ensure that the fish will not only be less apprehensive but will also display more intriguing behavior.

A well-decorated, mature species set-up may begin to produce fry without further intervention. If the adults are kept in a communal tank, a breeding aquarium should be kept separate. They breed twice a month, laying up to 25 eggs.

It can be as basic as a small air-driven sponge-type filter with Riccia, Taxiphylum spp. mosses, floating plant roots, or woolen spawning mops for the fish to deposit their eggs in.

After the parent Clown Killies have paired off, the fry can be observed hidden around plants floating on the surface, where they can be scooped up with a baster or spoon and moved to a rearing tank.

The adults don’t consume their young, but the older fry does, therefore they should be moved as soon as they’re big enough. Also, larger invertebrates like snails or shrimp should not be kept in the breeding tank.

Video: How To Care Clown Killifish (Include Suitable Temperature)

Do Clown Killifish need a heater?

As long as the temperature is above 18°C where you live, you won’t need a heater. However, if the temperature drops below 22C throughout the day, you may want to use one.

How many Clown Killifish should be kept together?

Keeping clown killies in groups of at least eight to ten is recommended. You’ll be able to observe more of their natural behavior if you keep them in larger numbers rather than a single fish or a pair.