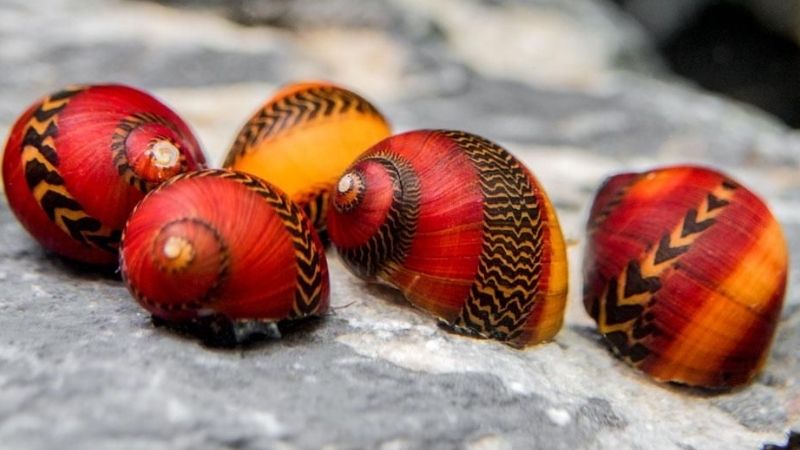 Nerite snails are a type of snail many people are interested in because of their life, their various kind, and their color also. People are curious about can nerite snails live out of water. Let’s start finding out!

These snails are very popular due to their unique patterns and colors, as well as their practical benefits. Besides cleaning algae off of glass, plants, and decorations, they also eat hair algae and keep your substrate clean and the right color.

The nerite snail is widely thought to be the best snail in the aquarium hobby for obliterating algae from glass, rocks, live plants, driftwood, and other aquarium decorations. Although they thrive in both freshwater and saltwater, they need saltwater to reproduce. Thus, they cannot overcrowd any freshwater aquarium. The Nerite Snail is completely peaceful, so it is completely safe to keep it with any other snail, fish, shrimp, or live plant.

Zebra Nerite snails originate from Africa, specifically Kenya, Mozambique, Somalia, South Africa, and Tanzania. They are not hermaphrodites, so they include both males and females. Nerite snails are low-maintenance and very hardy, making them ideal for beginning aquarium enthusiasts.

Among all snails, Nerite Snails are known to be one of, if not the most voracious algae-eaters. In the absence of enough algae in the aquarium, algae wafers or blanched vegetables (such as kale, zucchini, carrots, etc.) can be added to the fish’s diet.

Attention! Avoid food products, medications, and plant fertilizers containing Copper in any form. It is known that copper is toxic to invertebrates. It is common for commercial fish foods, medications, and plant fertilizers to contain copper or, more commonly, copper sulfate. Ensure that you read the ingredient list of any product you intend to put into the aquarium in order to ensure that it is free of copper.

Can Nerite Snails Live Out Of Water?

There are many factors that can force the nerite snail to crawl out, including inadequate water quality, overcrowding, and not enough food. In most cases, though, there is nothing to worry about since they are very curious about their surroundings, and their natural habitat also encourages them to do so.

Do Nerite snails try to escape?

It’s common for some snail species, such as Nerite snails, to escape the tank due to their curiosity. To explore their surrounding environment, they do this. In any case, staying out of the tank for an extended period can be harmful since aquarium snails are moisture-loving animals.

Do Nerite snail eggs go away?

As a result, Nerite snails are quite adaptable, as they can live and lay eggs in either fresh or saltwater. … Occasionally, eggs may hatch in freshwater, but the larvae will not survive. In a freshwater aquarium, a female Nerite snail will continue to lay eggs that, in most cases, will not hatch.

It is impossible for snails to eat fish poop

Can Nerite Snails Live Out Of Water? This is the question many people want to know about! If you are, I hope this article will help you!