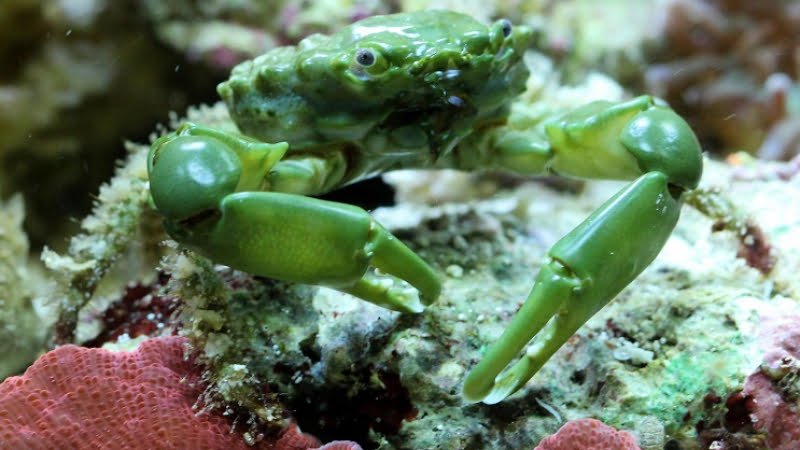 The emerald crab is an aquatic crustacean that typically lives in the Mediterranean and Atlantic oceans. The emerald crab has a life span of about 3 to 5 years. Usually, they have light green color with some other colors mixed in.

Yes, Emerald Crabs, like other crustaceans, molt as they develop to replace their shell with one that better suits their increasing body. So, when you go to examine your saltwater aquarium in the morning, don’t be confused and assume your Emerald Crab died in the middle of the night. They will abandon their shell and seek refuge in the reef until they can obtain a replacement shell. The frequency with which your crab molts is determined by the habitat in which it lives.

How Often Do Emerald Crabs Molt?

When it is necessary, every invertebrate will molt. There isn’t a set timetable. It is only used when necessary.

The crab will move if it is still alive. Molting usually takes only a few hours and then hides or remains immobile for a day or two while the exoskeleton hardens.

Emerald crabs, like other crabs, will molt from time to time. This occurs when the crab’s present shell becomes too small for them. There is no defined timetable. Water conditions, food availability, and your creature’s growth rate determine how often your emerald crab molts.

Emerald crabs molt by leaving an empty shell behind and hiding for many days. Some can remain concealed for up to a week! They do this because their new bodies are prone to becoming mushy. Because they lack a solid exoskeleton to defend themselves, the fragile crab will keep a low profile.

Don’t be alarmed if you notice an empty shell at the bottom of your tank! It may appear to be a dead crab, but it is most likely only the exoskeleton. If you’re not sure, turn it over with some tongs. It should be evident that it is hollow.

The average emerald crab lifetime is two to four years. They are not the longest-living invertebrates, but they can survive the most inexpensive, cleaner shrimp. As is usually the case, there is no way to predict life expectancy. These crabs are at the mercy of their surroundings and the care you offer. Maintain the aquarium with respect and do your part to provide the crabs a nutritious food. If not, your crabs’ lifespan could be drastically reduced.

What To Put In Emerald Crabs Tank

Emerald crabs are like rocky places teeming with life in the wild. To keep your crabs as comfortable as possible in captivity, try to recreate their natural habitat in their tank as nearly as possible.

Begin by applying a coating of fine sand. Then, make a live rock arrangement. When originally introduced to the tank, emerald crabs are mostly nocturnal. They’ll spend most of the day lurking in cracks and caverns. You’ll see more of them during the day as time goes on. Even yet, the rocky outcrops are useful for cover.

The rocks can also gather algae, which can be used as a useful food source. Coral isn’t required. However, it can be used to give a more natural look. Simple plants are also beneficial. Crabs will consume creatures that dwell on leaves. Turtle grass and other ground covers are very appealing to them.

There are no illnesses that significantly affect the emerald crab. This species, however, is vulnerable to all of the health issues that marine invertebrates face.

Shell sickness is one of the most prevalent problems for emerald crabs. A viral or bacterial infection generally brings on this condition. Pockmarks on the shell and legs are possible as a result. In difficult situations, the illness may eat its way through the body and damage your crab inside.

Mites and other parasite diseases are also possible. Emerald crabs may also transport marine Ich. Surprisingly, the illness has no direct effect on the crab’s health. Instead, the crab serves as a carrier, infecting the fish in the aquarium.

If your crab has an illness, you must isolate them and locate the right therapy. It is best to avoid copper-based medications because invertebrates cannot digest the metal.

The majority of illnesses are preventable. Maintain an eye on tank conditions and keep the habitat clean. If you introduce new species to the tank, make careful to quarantine them to eliminate any hitchhikers!

What do emerald crabs look like when they molt?

When they’re molting, emerald crabs will leave behind an empty shell and hide for several days. It might look like a dead crab, but it’s likely just the exoskeleton.

Why do emerald crabs turn white?

As Emerald Mythrax Crab outgrows the existing shell, it sheds the shell off, a process called molting, and a new cover replaces the old body.

Emerald crabs are not capable of catching healthy fish.

One of the most familiar crustaceans found in coastal waters is the emerald crab. The colors and patterns of these creatures include blue, green, red, and emerald. The emerald crab is also known as the green crab or emerald shore crab. And while they may be famous for their coloration, these crabs are not always easy to spot due to their small size and camouflage abilities. The emerald crab molt happens every year at this time when they shed their shell to grow bigger!