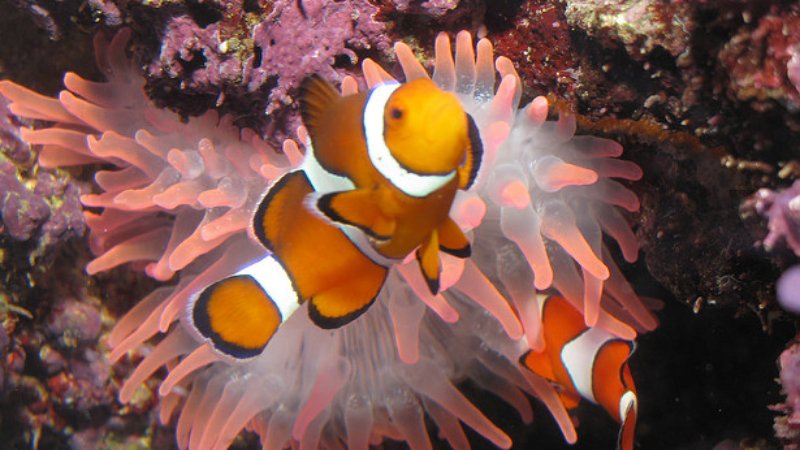 As their name suggests, clownfish are fish that live in the sea, and what they like to do is eat what’s around them. They can be found in temperate waters all around the world.

Well, I can tell you that this article will cover what will clownfish host use for their homes. Clownfishes are very popular in the aquarium world as most people find them to be quite beautiful creatures. They also have some interesting behaviors that make them fun to watch!

What Will Clownfish Host?

Clownfish live under corals and anemones in the ocean, meaning they are “hosted” by them. A sea anemone and a coral are quite different because corals have a more complex skeleton, while anemones are soft, filled with water, and can be pretty squishy.

Clownfish and Anthozoans (Anemones and Corals) have a symbiotic relationship. The hosts provide shelter and food for the fish, while the fish provide nutrients for the host and clean the leftover algae.

Anemones are usually more popular among clownfish owners. Anemones, on the other hand, tend to be preferred by different types of clownfish. The following is a list of six kinds of anemones that clownfish will host, all very pretty.

The Bubble Tip Anemone is one of the most colorful Anemones with long, thin, finger-like extensions and a bubble-like tip that swirls around in the water. Apart from being beautiful to look at, Bubble Tip Anemones are also very easy to maintain, as they require little maintenance and adapt quickly to home aquariums.

Also, they are the most common choice as different types of clownfish, such as Red and Black, Cinnamon, Clark’s Yellow Tail, Red Saddleback, etc., readily accept Bubble Tips. As well, they are straightforward to propagate and have fewer predators than Carpet Anemones.

This is one of the enormous anemones, with a sizeable disc-like body and colorful and smaller tentacles and extensions. They often switch colors from bright reds, pinks to neon blues or purples.

To thrive and live, they require perfect water conditions and perfect lighting. It is likely that they will only host one type of clownfish in one tank and may host different styles in other tanks. Skunks, Percula, Pink Skunks, and Ocellaris Clownfish, tend to favor this type of Anemone as their host.

If that is the color theme you’re going for, Leather Sea Anemones have muted beige, yellow, and green tones. Anemones of blue, purple, and mauve are often called Sebae Anemones. The name comes from the appearance of leathery tentacles.

The reefs are home to about 14 different kinds of clownfish, such as tomato, saddleback, fire, pink skunk clownfish, etc. One of the most common types of Sea Anemones imported may not always do well in captivity. The best owners are those with plenty of aquarium experience.

Like an anemone, this sticky carpet appears in blue, beige, orange, green, and tan colors. Their entire body is covered with damp extensions, making them look like carpets. Your clownfish can enjoy them like a carpet in your living room.

Clark’s Yellowtail, False Percula, Ocellaris Clownfish, etc., are good hosts for Carpets. There are larger species called Giant Carpets, as well as smaller ones. Due to their delicate nature is relatively rare in the aquarium trade as they only thrive in mature reef aquariums.

The purplish-gray to brown-colored fish are initially found in mud, sand, and mudflats on the bottom of oceans. They also have fewer tentacles than other anemones, and they are long and swirl around one another.

The Perfect Coral Home For Your Clownfish Host

In addition to making amazing hosts for clownfish, corals also make excellent hosts for other marine creatures. A rigid structure is usually associated with these. Corals (and anemones) are essential to natural reefs as they improve the reef aquarium environment. Here is a list of some corals you might choose as hosts for your clownfish.

The Duncan Corals, displayed in vibrant colors including pink, white, and cream, can serve as a stunning addition to any presentation. The tentacles of these corals are shorter and fewer in number than those of other corals so that the skeleton can be seen.

They proliferate and are easy to care for. Duncan colonies tend to attract Ocellaris, False Perculas, Orange Clownfish, and other species. Even so, different types may also host them and thrive in symbiosis with them. Like many other Anthozoans, they do not sting, so that you can introduce other corals to them as well.

With their T-shaped tips and long, puffy tentacles, these corals are often referred to as Euphyllia Hammer Coral or Anchor Coral. They even look like mushrooms. Often they are fluorescent green but can sometimes be blue-gray or gray.

Corals that sting neighboring corals should be given plenty of space since they are very aggressive. These corals can be good hosts for Percula Clownfish, but they may not be as welcoming to the clownfish themselves. Therefore, it is best to try Hammer Corals out before making any firm commitments.

Despite being beautiful, certain clownfish can destroy corals with their “nuzzling” and hinder their growth. Occasionally, this does not happen, and some clownfish, such as Oscillera, can host torch corals without any issues.

Beginners in the saltwater aquarium hobby will love toadstool corals because they are easy to take care of and can be kept in almost any tank-bred clownfish, such as Percula Clownfish, Osciellera, etc.

Corals that look like mushrooms are also called mushroom corals. There is a long stalk and an umbrella-like top covered with tiny white extensions, making it look like a carpet. The polyps of the toadstool look fuzzy when fully extended but smooth when they retract. Some of them may have green, “glowing” tips. Peaches are the most common varieties.

Will a clownfish host a hammer coral?

Active Member. It should be fine for the clown; mine recovered after a few days.

Not only will they host in fake anemones, but some people have taken a bunch of rubber bands and stuck them into epoxy.

Clownfish are some of the most beautiful fish in our oceans. However, what will clownfish host is what makes them stand out from other saltwater creatures. Clownfish are known for hosting a wide range of invertebrates called sea anemones on their bodies. This symbiotic relationship has been around for years, and it’s what keeps clownfish looking so colorful and vibrant!