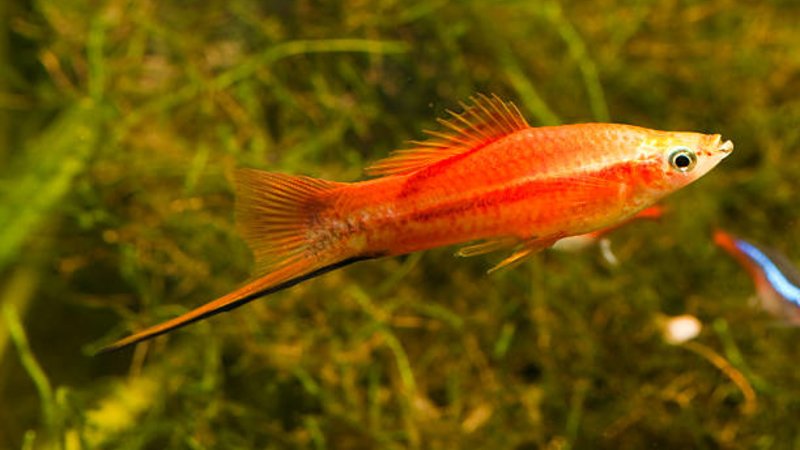 How do we identify swordtail fish male and female? The swordtails have been a favorite pick among the aquarium hobbyist community for a long time. They are among the best selections of aquarium fish, especially in the case of those just beginning to get into this delightful diversion.

However, not all swordtail owners know how to distinguish males from females. Thus, they can’t control the population of the school of fish, and it’s harder to get to the bottom of aggression among the same species or between different ones. I will give you all the tips on identifying the males from the females.

It’s not difficult to distinguish the gender of each swordtail fish you have in the tank. Here are some signs that will 100% help you identify males from females.

You might have guessed it already, but in general, female swordtails are bigger than males, which occurs very commonly in the animal kingdom, especially in the aquatic branch.

Female swordtails usually are larger than male swordtails. They have a round stomach that makes them appear bulkier. When they are pregnant, their stomachs become rounder than usual. In contrast, the male swordtails have a thinner body shape due to the naturally flat tummy. On average, a male adult swordtail is around 5.5 inches long. And female swordtails are approximately 6-7 inches in length.

If you have various swordtails in the tank that come in different sizes, the differentiation between males and females is easier. But if they appear to be relatively similar in size, I suggest you follow the following method more.

Female and male swordtails have very distinctive tail fin “designs”, and this body part is what makes this species special. The name “swordtail” generally comes from the males since they boast an elongated tail fin that shapes like a sharp and thin sword. The females, however, don’t share this unique feature. Their caudal fin is round and shaped like a fan.

Despite the menacing appearance of the sword fin, the males don’t wield it like a weapon. They take advantage of the sword fin to attract female fellows, which is for mating purposes only. Male swordtails don’t use this fin to attack each other.

Females have a gravid spot

You can check for the spot under the belly of the fish, and only the females have this feature. Typically, this spot has a darker color than other parts of the body. For other fish species, strictly speaking about the female ones, the gravid spot is usually black and very quickly located. But, for female swordtails, the spot might share the same tone as the body, just slightly darker.

Firstly, when there are both male and female ones in the tank, the male swordtails tend to swim along or chase the females for the purpose of breeding. You will never see the same behavior coming from the females during the mating process.

Secondly, male swordtails sometimes act aggressively. This happens mostly when they don’t get enough chances to breed or are in a position to compete against other males in tanks. If you find your swordtails fighting, chances are there isn’t a balanced male-to-female ratio in the tank.

Thirdly, when they’re sick or are fertilized, female swordtails can be unsettling. But, they don’t lash out as violently as the male ones. If your swordtails suddenly lose interest in food, cease to swim around, hide more frequently, or lie at the bottom of the tank, chances are they are female swordtails and are in labor.

Why Is Identifying Swordtail Fish Male And Female Important?

There are 2 good reasons why identifying the number of male and female swordtails is crucial for a safe environment in the tank. They are:

As I have mentioned above, male swordtails are pretty competitive when mating, and it’s hard to avoid the breeding process when there are both males and females in the tank. When there are too many males around compared to females, the “gentlemen” will turn aggressive against their male fellows to assert dominance within the water body.

If you don’t identify the males and females and ignore the safe ratio between the two genders, your lovely aquarium may become a fighting ring for the male swordtails. As a result, the population will definitely be reduced, and diseases may even appear within the tank due to stress.

In this case, it’s best to keep a lower number of males to females to avoid aggression and danger for other fishes. It’s recommended that the ratio is 1:3, male to female.

The swordtail fish are prolific breeders and can produce many fishes without their owners’ instructions or “manipulation”. If you’ve got different genders within a tank, swordtails require no time to start reproducing.

If you don’t want to overpopulate the tank, or you don’t want to keep separating them for a safe environment, it’s best to identify their gender before things get out of hand. On the contrary, if you want to breed them for commercial purposes or any other goal, keeping only females or males together will prevent breeding from taking place, thus ruining your business.

If you are a beginner and need some advice on how to take care of swordtails, or if you wonder about the work you will have to put into taking care of them, I have quick tips for you.

Size of the tank

Swordtails are active species, and they need extra space to swim to keep a peaceful attitude. That’s why many suggest beginning with a minimum of 15 gallons tank.

Remember that a 15-gallon tank would be the ideal size for a single swordtail fish. If you want to keep a group of swordtail fish, you need to consider a 30-gallon aquarium or more extended ones. Bigger tanks are better for larger groups or if you’re looking to keep an entire school of fish in a single tank.

Swordtail fish are omnivores that consume almost everything in the wild. But protein is what these species need to stay healthy and thrive. Daphina, brine shrimp, larvae, etc., are some of the most common food options for swordtails. You can visit Amazon, Glass Aqua, or Aqua Imports for these products.

How can you tell if a swordtail is male or female?

The males are the only swordtails that possess an extension of the tail fin. Females sport a rounded tail fin that shapes like a hand fan. Female bodies are larger and more rounded than males when they reach maturity.

Can you keep 2 male swordtails?

It’s possible to keep male swordtails only in the same tank. But it’s recommendable to have 5-6 ones to diffuse possible aggression. The fewer members in the aquarium, the higher the chance they will go berserk on each other. So I wouldn’t recommend keeping two males only unless both have proven peaceful.

Can I keep an all-male swordtail tank?

It’s possible, and the recommended number of male swordtails is 5 to 6. When there is a mixture of males and females, you should make sure that the ratio of females to males is higher. A bigger tank also helps diminish attacks between male comrades.

How do swordtails mate?

Typically, the males will approach the females from the side while flaunting the sword-like tail fin to attract their attention. Then they will touch the underside of the females with their gonopodium, transferring the sperm.

Can swordtails change their gender?

No, this phenomenon doesn’t happen with swordtails. When you find male swordtails that behave or have similar body features as females, it’s more likely that they have suppressed their growth due to being subjected to a more “dominant” male comrade. They aren’t changing their gender. They are suppressing their development.

Video: How To Identify Male Or Female Swordtail Fish