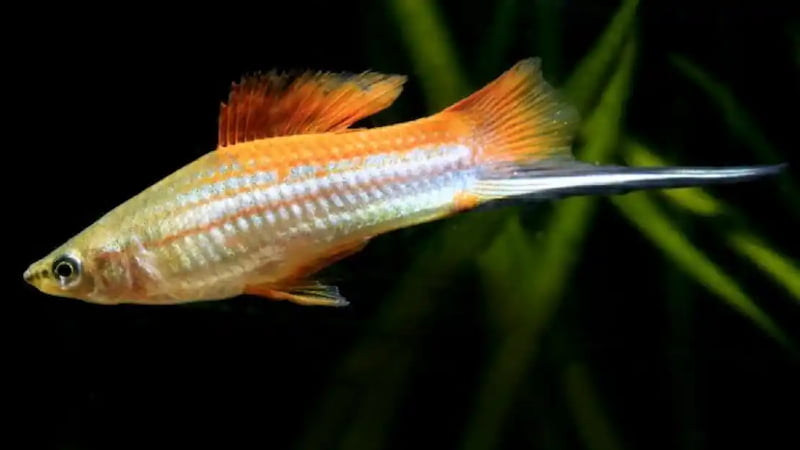 What are the most sought-after rare swordtail fish breeds? Let me introduce you to 5 most majestic ones that only the pro aquarists know and are daring enough to keep. I will also give you some advice on how to take care of a swordtail. To many’s surprise, keeping rare swordtails isn’t as complex as rocket science. So if this is your first time caring for a rare swordtail, I believe you will do fine with extra tips and care. Let’s get started!

Kohaku or Koi swordtails are famous for their color pattern, which resembles a Japanese Koi fish with a white body and orange patterns. What makes this breed desirable is that its white body is transparent, highlighting the orange and gold specks vividly. If you want to keep your aquarium bright and vibrant, this breed is a wonderful pick.

The good thing is that this breed is rare but not too rare. So it shouldn’t be too complicated to get your hands on one. You can check out PetCo or Aqua Imports for a Kohaku swordtail.

From its name, you can already tell the appearance and uniqueness of this breed. Dalmatian swordtails also have a slightly transparent body color, and painted over them are small to large specks of black color. This one is tough to get and can’t be found in general pet stores.

By far, this is the most majestic-looking breed of swordtail for me. A black Hamburg swordtail has an entirely black body with golden specks on its back and underbelly and caudal and dorsal fins. More or less, the species looks like darkness with its figure highlighted in gold. There is nothing more majestic than that, and I haven’t seen one with my own eyes in ages.

This species looks very similar to the one above. But instead of a fully orange and blood-red body, a hi-fin pineapple albino swordtail boasts of an iridescent white body with a light-orange back and dorsal fin. It’s not easy to encounter one of this breed.

How do we take care of rare swordtail fish? It’s pretty much similar to taking care of the ordinary kind. I will specify the living conditions and care guide for swordtail below.

Male swordtails can be pretty fierce when they want to mate, and if both males and females are within the aquarium, it’s impossible to keep them from reproducing. If there are too many males compared to females, the males will turn aggressive at their male companions to claim dominance.

In this instance, it’s recommended to keep a safe ratio of males to females to reduce threats and aggression for other fish. It is advised that the ratio be 1 male: 3 females. Also, it’s best to separate the mother from the tank and put her in a separate tank before she gives birth. Male swordtails will want to mate constantly, which can cause stress for the females.

The diet of swordtails is similar even though there are different breeds. You can feed a rare swordtail the same food that you give to a common one, but it’s best to ensure that the quality of the food is high to avoid negative possibilities. It’s best to feed them both vegetables and live food, such as lettuce, brine shrimps, daphina, flake food, etc.

A male adult swordtail is about 5.5 inches, and female swordtails are about 7 inches long. This species is considered significant among the community fishes, so it’s not surprising that they need ample living space to develop fully and comfortably.

A 15-gallon tank is a perfect size for just one swordtail. If you’re looking to keep a school of swordtail, it is best to get a 30-gallon aquarium or a bigger one. Also, it’s essential to consider the space that decorations and greens take.

I find it crucial to provide hiding places for swordtails because even though this species is relatively peaceful and doesn’t cause a stir on a daily basis, they can still get violent during the mating process. That’s why having the same decorations and plants inside the tank is beneficial. They will work as hiding places for weaker or smaller fish.

You can also remove the aggressor from the tank for him to calm down, but protecting other swordtails, especially rare ones, takes more initiative. We can’t keep an eye on them all day long, so it’s advisable to have decorations in the water body.

Swordtails are tropical fish, and they live at 64 to 81 degrees F. They are freshwater fish, so you should keep them with other species that handle freshwater environments or keep swordtails only. The ideal pH level for swordtails is around 7.0-8.5. If the pH level within the tank isn’t correct, make sure that you remove the fish from the tank and adjust gradually to avoid “shocking” your fish. They will need time to adapt to new changes in the environment, even though they are good.

Yes, Dalmatian swordtails are quite rare, and it’s hard to encounter them in most common stores, which explains their high price. To find a male Dalmatian swordtail with pronounced caudal fin, hobbyists should take a look at specialized exotic fish shops.

Will a swordtail breed with a platy?

Yes, because swordtails and platies are part of the same family called Xephophorus. They can create healthy offspring without requiring intervention from owners. All you have to do is keep them in the same tank, and they will reproduce independently.

What is the lifespan of a swordtail?

A healthy swordtail can live up to 5 years. With an ideal living condition and a nutritious diet, most swordtails live around 3-4 years on average. Some aquarists have spotted ones that live longer, but it’s scarce.