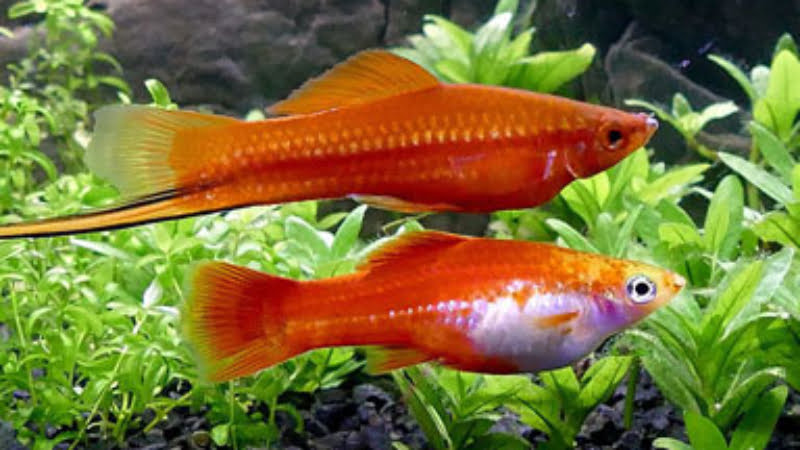 As with other livebearers in aquariums, swordtails produce live young rather than eggs, implying their use as brood-rearing fish. In spite of the fact that the swordtails’ gestation period is 28 days, it may not be easy to determine a pregnant swordtail fish. Here are some signs to help you realize whether your swordtails are pregnant or not. And I will give some tips to take care of them in this period.

What Are the Signs That Your Swordtail Fish Is Pregnant?

Once mature, your swordtail fish will be pregnant for the rest of her life. As a result, if you’re unsure whether your fish is pregnant or not, she’s most likely pregnant!

If you are unfamiliar with her pregnancy symptoms, I will describe them to you. Keep in mind that swordtails are livebearers, which means they give birth to fry without producing eggs.

Swordtail abortions are similar to human abortions, but female swordtails perform them on a relatively small scale. The word “abortion,” simply put, refers to a swordtail giving birth to a dead fry.

You shouldn’t worry since it’s rare for swordtails to produce dead fry (abortion). Nevertheless, you must play your part in providing a healthy pregnancy and a healthy baby at the end of the pregnancy!

How to feed your pregnant swordtail fish

Thinking about your swordtail and the fry growing in her tummy, you can end up overfeeding. This is a typical blunder made by new Swordtail owners!

Obviously, your Swordtail requires nutritious food in order to feed herself and her increasing offspring. She can’t eat much, though, since fried takes up too much of her room. As a result, you should feed your pregnant Swordtail 3 to 4 small meals every day. Don’t put too much pressure on her. It is sufficient to consume a modest pinch of food three to four times every day.

However, more food may be wasted in your tank and then polluting it.

Here’s something you can try! For breakfast, you should give brine shrimp for lunch, flakes for lunch, in the afternoon spirulina, and for dinner is freeze-bloodworms.

In summary, you need to ensure that you give tiny portions. And don’t forget to make nutritional variations as well!

Separate tanks have the following advantages:

This can be done by using a tank divider. But it’s better to get your pregnant swordtail its own tank. A separate tank will be less likely to cause problems.

You can also purchase a breeding box. It is useful for the fry to have the breeding box so they can come out at their own pace. However, this might exhaust your pregnant swordtail, who is restricted to her space.

It is hard to be pregnant, but even harder to labor. So, to make your pregnant swordtail as stress-free as possible, buy a large tank of over 40 gallons.

I understand that you will think that this seems a bit excessive. It was my fault that I overcrowded my pregnant swordtails. Half of the fry died as a result. Previously, I kept three pregnant swordtails in an aquarium of 20 gallons.

You can keep a single swordtail in a 15-gallon aquarium.

In one tank, one male impregnates many females.

The fries will taste even better if you purchase a large, separate tank. Each swordtail can give birth to 80-100 babies. As a result, you will need at least 30 gallons to hold the fry alone.

Maintain the quality of water

Water parameters are probably the most important factor for the health of your pregnant swordtails. If any changes occur to the parameters, your swordtail will be stressed.

As soon as you have installed the new 40-gallon tank, make sure the water parameters are maintained as follows:

Temperature can be controlled by a heater, pH by baking soda.

Then, once these parameters are maintained, you can move your pregnant swordtail into this tank.

Plants are important for pregnant swordtails

Despite the fact that you have moved your pregnant swordtail to a different tank, she may still be anxious and refuse to give birth.

Aquatic plants can help if this is the case. Why not plant some Hornworts? It doesn’t matter which aquatic plants you use, so long as they have hiding spaces.

In general, pregnant swordtails lay their eggs behind plants to protect their offspring. This will make her feel like she is back in nature. She will also have a good sleep thanks to the darkness from the plant’s shadow.

When is the right time to separate your pregnant swordtail?

Isolation over a long period of time can be harmful. As a result, you should only remove your pregnant swordtail from the communal tank after she has displayed indications of labor or late pregnancy.

What about starting earlier? Even from the 25th day onwards, it is possible for you to keep your pregnant Swordtail. She will no longer be harassed by the males. And she will also feel at ease giving birth to a child.

Swordtails take on average six hours to deliver. When she is having difficulty, swordtail mothers can take up to 12 hours to give birth.

There have been cases where Swordtail has delivered some babies, stopped them, and then only resumed after a few days.

Sometimes, after being kept in a separate tank for 24 to 48 hours, the swordtail doesn’t give birth. The fry may not have reached their fully developed stage. By increasing your tank’s temperature slightly, you will be able to mature her fry.

Once your swordtail gives birth, you need to return the tank temperature to its normal setting.

Isolate even after birth

Afterward, you should rest your pregnant swordtail so that she can recover. It is recommended to allow her to rest for 24 to 48 hours. After that, you can move the female swordtail to your communal tank.

Swordtail fish, moreover, are well known for their cannibalism. Her babies are readily eaten up by the mother without remorse. Therefore, separating the fry from the mother is therefore crucial!

It is best to keep your fry in separate tanks. When the baby swordtails are born, separate them from their mother and place them in your fry tank.

Not having a separate tank for the fry

Swordtails may seem to have empathy. That’s because swordtails are calm creatures. However, they are not remorseful towards their own kind.

Thus, in order to keep your new fry healthy, you might need to get a separate tank. In other cases, female swordtail might end up eating her own young.

You should consider getting a tank divider if you are unable to buy a new tank for fry. After that, divide the fry from the female swordtail. The method is typically used by people who do not have the time to set up a separate tank for fry.

The female Swordtail can then be returned to the community aquarium after 2 days of rest. Once the divider is removed, you can give your fry the whole tank.

A swordtail needs at least 10 gallons of space to swim around. You can imagine how stressful it would be for pregnant swordtails to live in a congested tank.

To help her feel stress-free, provide her with a large tank space!

Therefore, you should pay attention to every detail in your swordtail.

Video: How to Tell if a Swordtail is Pregnant?

Does a swordtail bear a lot of babies?

The Swordtail gives birth to approximately 80-100 children at a time. Nevertheless, a pregnant swordtail might be stressed and some fry might die.

Why aren’t my swordtails giving birth?

Immature fry, stress, and water parameters may be factors contributing to the Swordtail’s delayed reproduction.

What Is The Pregnancy Period For Swordtail Fish?

Female swordtail fish typically carry the baby around with them for about a month before laying it. Therefore, her stomach grows a little due to the preparation for the little one she is going to have.