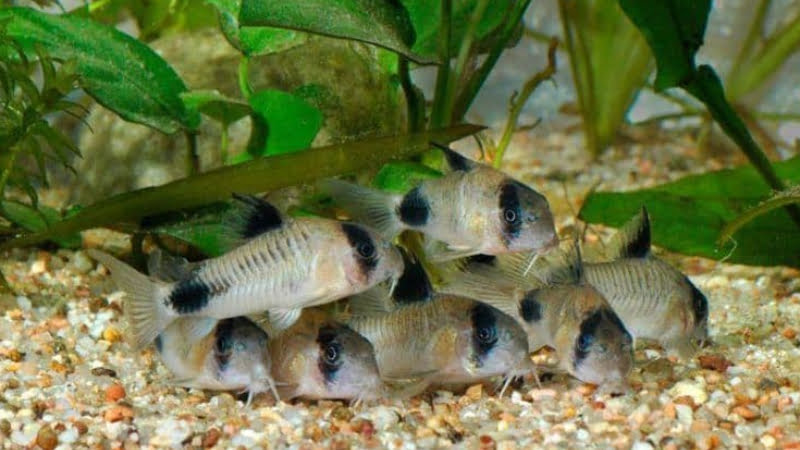 Panda Cory Catfish is one of the most common species kept as a pet in freshwater aquariums.

Aquarists of all skill levels adore them because of their calm demeanor, sweet disposition, and distinctive traits.

The majority of people who have Corydora bettas will, at some time, wish to breed their fish. Fortunately, Panda Cory Catfish breeding isn’t that difficult.

In this post, we cover everything you need to know about establishing a breeding tank, promoting spawning, and rearing Panda Cory fry so you can get started right away.

You should use air-powered sponge filters or box filters in order to prevent fry from being sucked into them. It is recommended that you also include some vegetation in the tank, such as some Java moss.

Temperatures around 75°F and a pH of 6.5 are optimal for a successful trial. Peat filtering can be useful, as is the use of RO water for purifying water.

Keeping in mind that panda cory catfish are sexually mature by the age of five is an important consideration while breeding these animals. As a result of the fact that they travel in schools, specimens of both juvenile and adult sizes stay together.

Therefore, before you make your effort at spawning, you need to first segregate the juveniles, house them together, and wait for them to reach sexual maturity. It is recommended to bring in two males and one female in order to achieve the appropriate ratio for effective spawning.

Getting a group of juvenile Corydoras pandas and allowing them to mature together is the strategy that is suggested for using when trying to pair off the species. Because panda cats are very social animals, it is advised that you acquire at least four to six individuals. This will also enhance the likelihood of obtaining at least one of each sex. You could even end up with multiple men if you’re really lucky. Spawning is more likely to occur within a group if there are many males present.

At this point, it is important to make a few observations about general cory breeding practices. There are a lot of animals that only reproduce at certain times of the year, such as during the rainy season in their home areas. This happens at the same time of year as the winter in the UK; therefore, if efforts to breed during the summer are unsuccessful, it may be best to wait until the winter to try again. In addition, it may take many years for some species to reach sexual maturity; thus, it is important to have patience with them.

Furthermore, it is possible that other strategies, such as the timing of water changes or the oxygenation levels, are occasionally necessary. If you aren’t having any success so far, you shouldn’t be scared to attempt a variety of alternative strategies.

If the fish do decide to spawn, they will typically deposit their eggs on the glass of the tank, and they will do so often in a region where there is a lot of water movement.

During sex, males first become more energetic and excited and then begin to aggressively seek females. Before the couple assume the famous “t-position,” in which the male grasps the female’s barbels between his pectoral fin and torso, a receptive female will allow a male to caress her with his barbels. This indicates that she is ready to mate with the male.

After this, he will release some sperm, and it is believed that these will travel via the mouth and gills of the female before reaching her pelvic fins. The female takes them and arranges them in the shape of a “basket,” then places a single egg within it (although up to 4 may be released). As soon as this is fertilized, she will swim out in search of a good location to lay the egg before beginning the process all over again.

As soon as this is fertilized, she will swim out in search of a good location to lay the egg before beginning the process all over again.

If you let the fish spawn in a communal setting, you will often observe numerous males pursuing a female when she tries to deposit an egg. This happens because the men are competing to be the next chosen to fertilize the eggs.

If the water temperature is around 25 degrees Celsius, the eggs will hatch after four to five days. The fry is around 6 millimeters in length at this stage, and they will look for a safe location to hide out in until they are able to develop into larger sizes.

Even when they have their own tank in which there is no adult fish, it may take them many weeks before they are comfortable enough to swim about the aquarium without being accompanied by an adult. When they are no more than two weeks old, you can get a glimpse of the charming panda pattern on their fur.

After four weeks, they will have grown to be over one centimeter in length and much thicker than when they were first born. At the age of two months, Corydoras panda fry is typically at least two centimeters in length.

After they have emerged from their egg sacs, the fry will continue to get nutrition on their yolk sacs for the next 48 hours. Because of this, feeding the newborn is not essential for the first two days.

The first meal that you should give your Corydoras panda fry should be microworms. When they are big enough, you may begin feeding them newly hatched brine shrimp, and then you can progressively increase the size of the brine shrimp.

Is it easy to breed panda Corydoras?

It was formerly believed that it would be rather difficult to breed this species in a home aquarium; nevertheless, the time has shown that breeding is achievable in this setting.
If you want to successfully grow this species of cory catfish, you may do so by adhering to some of the rules that I described above.

What is the average number of babies Panda Corys have?

The brood size of cories is typically rather tiny, but the offspring of panda cories are particularly small. In one night, my panda cory can lay approximately four to six eggs. It takes around four to six days for the relatively big fry to hatch, and once they do, they lie on the bottom of the tank where you can suction them up (with a Python cleaner, for example). In this way, other fish do not eat them, and you may grow them in their own tank.

Is there anything to take special note of when breeding panda cory catfish?

First, transferring your Corydoras panda from one tank to another is not a good idea since these animals are sensitive to change, and relocating them might reduce or eliminate their desire to have offspring. Instead, relocate their tankmates.
Next, you shouldn’t have any other fish in the tank with your pandas since other fish may consume the pandas’ eggs and even their infants.
Last but not least, be sure to execute frequent water changes at least once every other day; this will mimic the rainy seasons.