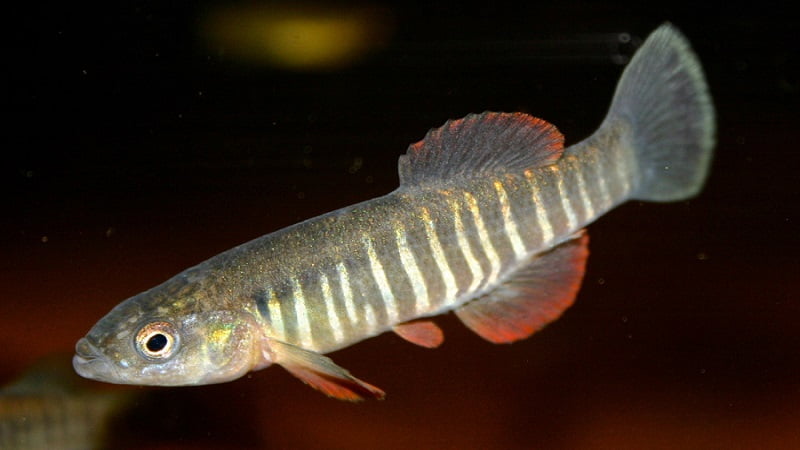 The Killifish family has a wide range of species that are attractive to both fishkeepers and researchers. The Northern Plains Killifish are among the killifish catching great attention from researchers. They may have some features that are similar to other killifishes species but the differences can be more. Keep reading to discover critical information about this fish species!

Northern plains killifish is the common name of the killifish species Fundulus kansae of the Fundulidae family. Their populations can be found in the Mississippi River, Colorado River, Rio Grande, and other river systems in North America.

The natural habitats of northern plain killifish are usually shallow river and stream with lower, moderate, and swift, turbid water flows. Sometimes, they can be found in lakes.

They can live in brackish, alkaline, and salty water conditions, better than many local fish varieties. The water temperatures that they can do best are between 20°C and 25°C.

The northern plains killifish size is usually around 2.7 inches (6.9 cm).

With proper care and appropriate living environments, their expected lifespan is about 3 years. In fact, most of them have a 2-year lifespan.

Like other killifish species, the northern plains killifish belong to the topminnow family that often feeds on insects from the water surface of their habitat. Consequently, they will have a head featuring the unique shape of killifish species and a mouth shape similar to other topminnows. Particularly, their head is flat and broad, and their mouth is wide and has an extending lower jaw that passes the upper jaw, giving it an upturned mouth. Besides, the northern plains killifish have an elongated, compressed body.

The northern plains killifish have various color shades which include brown, black, greenish, or straw-colored, with pale yellow or silver patterns on their belly. They have 12 – 28 dark vertical bars on their body, giving them a scientific name meaning “like a zebra.”

They can be found burying the whole body in the substrate while only showing eyes and mouth. This behavior of the northern plains killifish is to respond to stress and may help protect themselves from sunlight, predators, and parasites.

The northern plains killifish is reported to move in schools and with the same size species.

The northern plains killifish eats primarily aquatic insects and other invertebrates mainly located on the water surface near their heads, such as chironomid larvae, copepods, nematodes, and other small animals. Besides the aquatic insects, they sometimes eat aquatic plants.

Research showed that this killifish has their feeding activity increased in the daytime owing to the impacts of lights and higher temperatures and reduced in the nighttime. Besides, they are reported to exhibit an enhanced feeding activity during a full moon period because the plains killifish are usually sight-oriented in their behavior, they may have a more active feeding on bright nights.

Additionally, their spawning activity may be stimulated by a change in water temperature or a sudden water freshening, which often occurs when there is moderate or heavy rain in their spawning season.

They typically spawn over a sand or gravel bottom in shallow water with a depth of 6 cm – 10 cm.

Males do not establish territories but become aggressive toward each other while spawning and compete vigorously for the attention of the females; spawning occurs during a brief pairing of a single male and female (Koster 1948).

When the spawning occurs, the males are not territorial but aggressive towards each other and usually have fiery competitive behavior to attract the females. The spawning happens during a short pairing of one male and one female.

The eggs are buried in the sand or deposited over sand or gravel and are left unguarded.

The northern plains killifish may face a variety of parasites that infest their gills, fins, and organisms, as well as the eye and internal tissues.

The parasite Gyrodactylus stableri was described from the body surface and fins of the fish. Meanwhile, the parasite Neascus sp. (Posthodiplostomum) can infest the fish’s eyes and body cavity.

Yes, they actually associate in schools of similar-sized fish classes. Additionally, they neither display territorial behavior nor defend their home range or spawning grounds. This means territorial regulation does not take palace in this species’ populations.

What are predators of northern plains killifish?

The northern plains killifish can face aquatic and non-aquatic predators.
Their major non-aquatic predators are piscivorous birds such as the great blue heron (Ardea herodias) and the belted kingfisher (Megaceryle alcyon).
In the aquatic environments, plains killifish may face predation by other fish like largemouth bass, channel catfish, and notably the green sunfish (Lepomis cyanellus). When the green sunfish appear in the habitat of northern plains killifish, the killifish populations drop.
To avoid facing predation, they usually bury themselves in the sand with only their mouth and eyes exposed.

The northern plains killifish is a species that belongs to the topminnow family (Fundulidae). They come with schools of fish classes having a similar size to theirs.

They may face dangers from both aquatic and non-aquatic predators. Moreover, various diseases can be observed in these killifish because parasites infest their body, both external and internal parts.

I hope that this article will provide you with sufficient and useful information about the northern plains killifish.