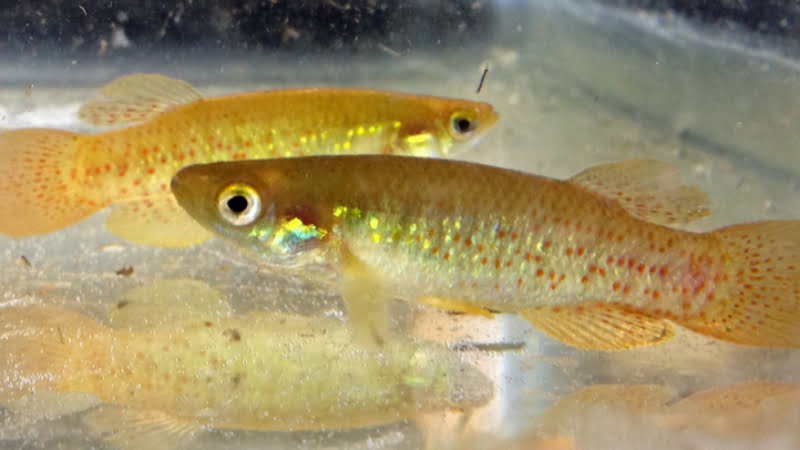 All aquarium hobbyists know about Killifish. They are amazing species to add to your aquarium tank.

We can find this kind of fish mainly in fresh or brackish waters in the Americas, in the southern part of Argentina, and in the extreme north end of Ontario. Several of these species also occur in southern Europe, much of Africa, the Middle East, Asia, and several islands in the Indian Ocean.

There is a great diversity of Killifish out there, but in this article, I only talk about North American killifish, which are poorly known by everyone.

The North American Killifish belongs to the genus Fundulus of the family Fundulidae. This family represents a wide group of small minnow-like fish with a wide variation in color and temperament within the group. Almost all of them can be kept in aquariums. Aquarists should pay attention to these fish because they have several characteristics that make them awesome.

First and foremost, they are hardy fish. They are renowned for their ability to tolerate heat, cold, and poor water conditions. Also, there have one legendary thing about them: they can jump on the floor. It is indeed interesting, right?

Finally, they have very interesting behaviors and habits. There have been several average aquarists successfully breeding North American killifish. But, in fact, there is so little information available about the spawning triggers. It is therefore difficult for most species to obtain well-defined information.

However, on the positive side, if you were able to figure out how to breed these gems, the data you discover will be a treasure trove of data for university and Department of Natural Resources fish biologists.

One amazing thing about the North American Killifish is that they are truly mosquito-eating machines!

With what they have, they still have not yet received any interest. Most sportsmen, naturalists, and aquarists have ignored them. They deserve more than that.

Some Species Of North American Killifish

Because North American Killifish are not very popular and there is very little information about them, so you may not know where to start. Which species should be selected for keeping? Let me recommend some species.

They are indeed diverse, and a ton has come to my mind. However, I’m going to cut my list down to five for the sake of brevity. I chose these species based on their beauty, hardiness, availability, and personal bias. These are my top five species without regard to order.

The golden topminnow (Fundulus chrysotus) is the classic North American killifish. It has a gold, yellowish-green body with red spots, and on the side, it has minor golden marks and vertical stripes. The fish can be purchased through pet shops or fish clubs. If you keep Fundulus chrysotus in your aquarium, then your aquarium is surely going to look attractive and be the center of attention of your guests.

A golden topminnow is a small fish that feeds mainly on the surface of the water. As an omnivore, it eats a variety of aquatic plants and terrestrial invertebrates, but the majority of its diet is composed of aquatic invertebrates. It will prey on aquatic vegetation, seed shrimp, snails, mayflies, water-beetles, Chironomidae, etc.

These fish tend to reproduce throughout the spring season and into the early part of summer. In the early stages of their growth, their fries reach maturity fairly quickly, but the longevity of the golden topminnow is not very long. Golden topminnows live for about two years.

Although golden topminnows are not currently on any endangered species lists, there is also no management plan for the species.

Blackstripe topminnows are so-called because they have a horizontal black stripe that runs along their sides. This fish averages between 5 and 7 centimeters in length. In general, their lifespan is between two and three years long.

It is well known that this small killifish has a shy temperament and that its unusual habit is to live mainly in the top three inches of the tank. Even though its greatest threat comes from changes to its habitat as a result of human intervention, the blackstripe topminnow is a fairly hardy fish

It can be an excellent addition to your community tank.

This fish is a little hard to find. But I guarantee you will love it as this guy is so cool. While the males have horizontal stripes over a light gray background, the females have vertical stripes. I think the contrast between their stripes makes this pair especially alluring. It makes an excellent species for study or hobby aquarists since it is hardy.

Fish of this species grow up to a length of 6.9 centimeters, but sometimes they can reach a maximum length of 8 to 10 centimeters. Most fish do not live past two years, but some can live up to three.

Its jaws are protruding from its flat head, so it can feed at the surface of the water. Plains killifish is variable in color, such as brown, black, greenish, or straw-colored, and its belly can be yellowish or silvery in color. As the name implies, the species is striped with dark vertical bars that give the species its scientific name, which means that it looks “like a zebra”.

This fish is very hardy and I have had this species spawn both in my pond as well as in my aquarium.

Bluefin killifish is the most well-known of the North American killifish. It can be an excellent species to add to your pond or aquarium tank.

It is amazing how colorful the male is with the blue and red coloration on the fins. An average bluefin killifish grows up to 2.9 cm. The small size and excellent temperament of this fish make it ideal for small tanks and jars.

Why are they called killifish?

This is an uncertain origin of the word killifish, but it’s likely that it came from the Dutch kil for kill (small stream).

Killies are generally good community fish and are able to live with other small, peaceful fish such as neon tetras and rummy nose tetras that require similar water conditions. When setting up your tank, there is one thing you should keep in mind that is very important to know: Killies almost all have incredible jumping skills.

How many killifish should be kept together?

If they are kept together, Killifish are able to thrive. It is recommended that you keep at least three of them together: one male and two females. It is possible to keep up to 12 individuals in a tank larger than 30 gallons.

All Killifish deserve to receive our attention. North American killifish are not known by many people. It’s time for us to pay more attention to them. They are also amazing fish that you can keep in your aquarium.

I hope my article has motivated you to learn more about the North American killifish.