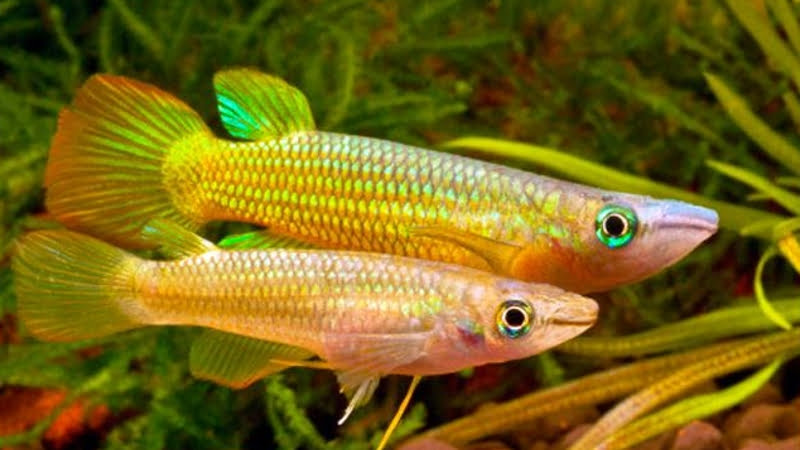 There is no doubt that Killifish are highly popular among aquarists because of their beautiful colors that bring stunning beauty to your tank. But does anyone have confidence in clearly understanding this fish? Do you know everything about Killifish?

Killifish is one of the weirdest fish I have seen. Some killifish can survive months out of the water and some others even reproduce in ponds or streams that dry out during a certain period of the year. Based on that characteristic, they can be classified as annual, semi-annual, and non-annual.

What Is Non Annual Killifish?

Non-annual Killifish are types of fish that live in permanent bodies of water that don’t dry up throughout the year. In this environment, droughts will not happen. Because the fish will not have to race against droughts, they are permitted to grow more slowly and gradually.

They are more suitable for keeping in the aquarium than the annual or semi-annual species as they have a longer life expectancy and can be bred like other normal fish.

Below are some common types of non-annual Killifish species that you can choose to add to your aquarium tanks. They are all stunning and easy to care for.

Jordanella floridae has the common name “American Flagfish” which is my absolute favorite killifish. This species has bright metallic red, and blue spangles, but there is also a bit of green running through them. They get their name flagfish because of the fact that the pattern they have on their body resembles the field of stars on the American flag.

They are fairly easy to breed. A significant difference between American Flagfish and nearly every other Killifish is that they are mainly vegetarians, eating algae, detritus, and soft-leafed plants such as Elodea. You should also give them protein-rich flakes and frozen foods occasionally.

Killifish are somewhat sensitive to poor water quality, so they need tanks with adequate filtration systems, as well as established tanks. It is recommended that aquascapes are heavily planted since the shade that is created by plants paired with a dark substrate will bring out better colors.

Clown killifish are tiny predators, and they have a strong preference for moving food. They can be trained to accept dead or frozen items, but they also prefer to feed on live prey such as daphnia, brine shrimp, and fruit flies.

It’s hard not to love these golden wonders. There are these huge eyes on their faces that give them the appearance of having a curious look on their faces. Some of the fish are solid bright gold iridescent in color, while others feature speckling and stripes on the back half of their bodies. They do have a small lyretail, but other than that, their fins are pretty small.

A golden wonder can reach up to four inches in length and have a large mouth, which makes them opportunistic predators. They hunt insects, invertebrates, and even small fish at the surface of the water.

For community tanks, Blue Gularis can be a challenging species. This is because their temperaments vary from neutral to somewhat aggressive. As opportunistic predators, guppys and tetras can easily be swallowed by them when they are fully grown. But if you choose the compatible tankmates for Blue Gularis, they are worth adding to the tanks. The fish are so stunning!

There are red stripes running laterally along the flanks of the male Red Striped Killifish, thus the name.

Red Striped Killifish are a peaceful species and are suitable for keeping in a community tank. They can be housed with other small peaceful species of Dwarf Cichlids, Coradoras, Rasboras, small Loricariids, Tetras, etc.

Daisy’s ricefish are not as showy as other killifish species, but they are still very attractive fish. Depending on the light they are in, their bodies are an iridescent silver color with hints of golden, blue, or green.

As the name suggests, the magnificus killi is a truly magnificent animal. Usually, the base color of the fish is a pale blue or even pink that is striped with vertical stripes over its belly. Its body is covered with tons of tiny iridescent spots. These fins are quite impressive due to the patterns of iridescent blue-green on the surface, which really make it stand out.

Natural habitats of non-annual killifish do not dry out. It takes much less time for the eggs to incubate in water.

Their tanks will have to be much barer. Some breeders like to include some fine-leafed plants, but it appears to be a difficult task to remove eggs from the plants. Including plants require you to remove the parents as soon as the eggs are laid in order to prevent them from eating the eggs.

Video about How to Breed Non-annual Killifish

What is an annual killifish?

Annual Killifish are species of fish that inhabit seasonal ponds and lakes that eventually dry up every year. Unlike most Killifish species, these fish have the shortest lifespan, usually lasting between 9 and 1 year. However, in an aquarium, they can live for several months longer. Some only live for three months. The flip side of this is the incredibly fast maturation of annual Killifish. Some species reach sexual maturity within 3 weeks of hatching. Before a Killifish egg can hatch, it has to go through a long period of “dry”.

What is a semi-annual killifish?

Semi-Annual or Switch Killifish are species of fish that come from seasonal rivers and streams that dry out occasionally but not every year. It is possible to keep their eggs under a dry spell, but they don’t require it.

How many groups of killifish are divided by spawning methods?

The most interesting aspect of killifish is that they have different spawning methods. With this aspect, Killifish can be separated into 3 basic groups: annuals, semi-annuals and non-annuals.

I recommend that you consider adding them to the aquarium tank because they are tough little guys that can be easily kept, breed readily, and have some of the most amazing colors you’ll ever see.