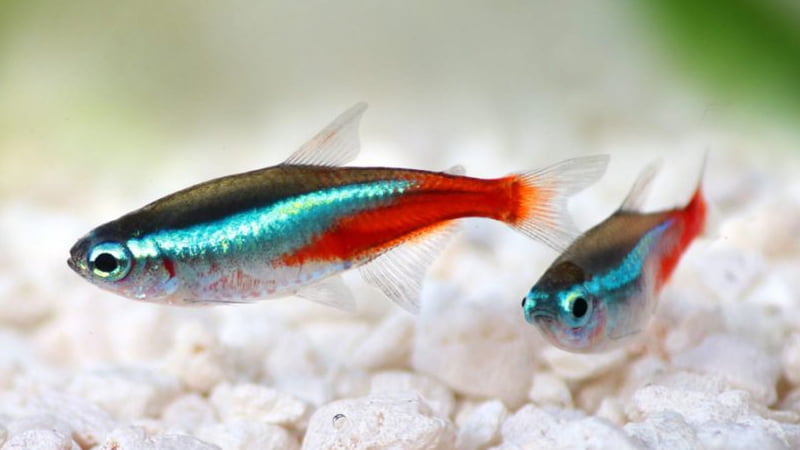 Neon Tetra (Paracheirodon or Hyphessobrycon innesi) is a slender fish that is one of the most popular aquarium fish among hobbyists due to its gleaming red hind fins and blue-green stripes on its sides. It is indigenous to blackwater and clearwater streams in the Amazon basin of South America, but it is now primarily found in eastern aquarium tanks such as in China and Thailand.

Due to their need for specific water conditions and time to acclimate, Neon Tetras can be challenging to breed in the first few weeks. Specifically, the balance of Neon Tetra temperature is essential for sustaining a healthy ecosystem. Not only is temperature crucial to their health, but it also plays a significant role in reproduction.

First, let’s review the required temperature for their survival and determine how to replicate their natural habitat in your aquarium. If you were successful, I have no doubt that your Neon Tetra will flourish and grow throughout their lifetime.

Neon Tetra is a native of South America, which can be mostly found at blackwater or clearwater stream tributaries of the Solimes River. It is a tropical fish. It inhabits waters with a temperature range of 20 to 26 °C (68 to 79 °F), a pH range of 4 to 7.5, and a hardness range of 18 to 215 ppm.

For reproduction, the water should be soft and acidic between pH 5.5 and 6.5, with a hardness between 18 and 89 ppm and a temperature between 80 and 84°F. This temperature range is ideal for hatching that lasts 24 to 36 hours and also supports the shorter free-swimming period of fry, which typically occurs 3 to 4 days after hatching.

Neon Tetra is extremely slow to completely acclimate, so maintaining a suitable temperature in permanence is important for their survival. It’s easy that the water temperature can fall and rise together with the temperature outside as well, and it causes differences quickly in both environments. This drastic change is the first thing that starts to harm Neon Tetra, so learning how to control the stable temperature is one of the first things you need to gain if you plan to own Neon Tetras.

Unsuitable Temperature: What Will Happen To Neon Tetra?

If the water is too low

The cold water that is under 60 °F is the reason for Neon Tetra shock and leads to death easily. If not, it will affect their digestion and even their breathing.

In addition, water that is too low can cause illness in Neon Tetra, which are:

If the water is too high

The temperature above 78 °F is too warm for Neon Tetra, and if it is even up to 90 °F, cold-blooded species like Neon Tetra have to deal with the reduction of oxygen and the activity of bacteria, which is more active. Warm water will increase the Neon Tetra’s temperature and metabolism, causing it to become hyperactive and consume more oxygen, but the hotter the water, the less oxygen it will consume. In addition, the increase in temperature stimulates the activity of bacteria. It leads to a threat that can actually suffocate the Neon Tetras.

What Is The Tolerance Of Neon Tetra Temperature?

Do you know that the tolerance of Neon Tetra can change in a small amount?

A group of scientists conducted an experiment to observe the change in Neon Tetra tolerance, and the results are truly astounding. They selected Neon tetra as an example of a freshwater teleost native to South American river systems that could be affected by changing thermal conditions.

The Danger Of A Sudden Temperature Change

If temperature fluctuations are essential or unavoidable, the single most important thing you can do for your Neon Tetra is to ensure a calm, steady transition. The abrupt shift in temperature will impair the immune system. This will result in a mix of stress and alterations to their digestion, increasing the likelihood of ICH and other bacterial and parasite diseases. You as a hobbyist would never want it to occur, correct?

And when it comes to extreme or sudden temperature changes, temperature drops are typically the most catastrophic. When the temperature of a Neon Tetra drops rapidly, even for a little period, it is quite likely that the fish will experience shock. And the inevitable conclusion is that they will die.

And while this is not sure to be lethal to the tetra, it will likely render them incapacitated and dramatically reduce their lifespan. Their muscles will weaken, and they will be subjected to intense tension. Stress is similar to poison for most creatures, but especially for fish.

Make sure that you are doing appropriately by following the advice provided below.

By using this tool alone, you can detect the slightest change in temperature, allowing you to respond in time before any harm is caused. Later, the heater will start working, keeping the temperature under control.

Maintain filtration system and cover the outside of the tank

By doing this, you can avoid the differences between the outside and inside of the tank in case you don’t have a heater. Using a lid to cover your tank is also needed for efficient results.

Do tetras require a heater?

For those who live in countries that don’t fall within the ideal range for Neon Tetra, I recommend using a heater, which is an excellent tool for controlling the temperature of your home.

Since Neon Tetra is tropical fish, cold water lower than 60°F can shock them, causing death or permanent weakness. Cool water can also cause harm and hidden risk to their survival.