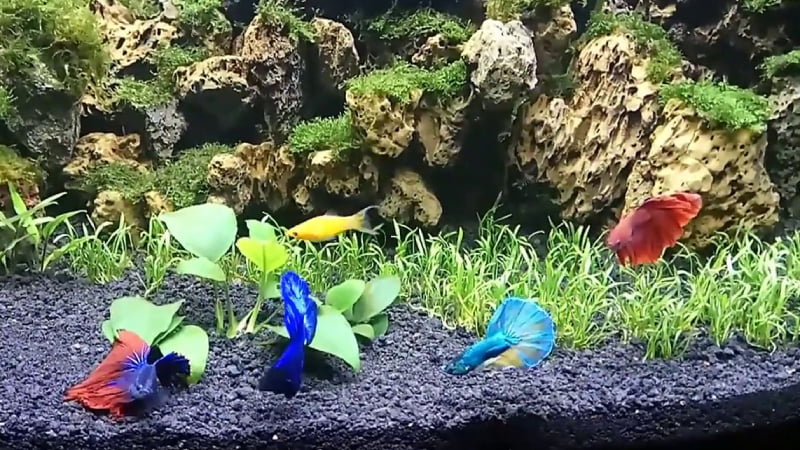 Many people believe that you can only have one betta fish in a tank, no more or less, since they will kill each other, and this is true. There are, however, instances when individuals possess multiple betta fish tanks. This is very possible, but it must be done correctly or you will end up with dead fish. Therefore, in order to prevent this from happening, read my post below.

Can Multiple Bettas Live Together In One Tank?

The answer is, of course, that you can have more than one betta in your aquarium. And the gender may determine how many bettas may be housed in the same tank.

Many people are aware of or have heard that male bettas are notoriously difficult to get along with. This is correct — you cannot have more than one male betta fish in the same tank at the same time. They are attractive, but they have a bad temper.

There is a limit of one male that can be kept in an aquarium, as the males fight with each other (that is why they are commonly known as ‘Siamese fighting fish’). In the wild, one would run away. Nevertheless, in an aquarium, this is not possible. Instead, the fight continues, eventually leading to the death of one of the fishes or both.

Females are a little more tolerant of one another than males. When given enough space, several bettas can live together comfortably. If the tank is overcrowded, however, females may begin to exhibit territorial behavior.

Another thing you should be noted is that male and female betta fish should not be housed together in the same tank, except for temporarily breeding reasons.

Tips To Manage For A Multiple Betta Fish Tank Successfully

Many pet retailers keep all of their betta fish in a single cup or bowl, making this a challenging task. Pay attention to the characteristics of the betta fish you choose. Bettas that show signs of hostility by flaring their gills at the fish in their vicinity may not be ideal for a sorority. It’s best to purchase more peaceful betta fish, and the presence of a betta in the sorority typically indicates that those fish are good tank mates for the other female bettas.

The tank should be heated to 76-78 degrees Fahrenheit, properly filtered, and large enough for bettas

A tank of at least 25 gallons is necessary for female betta fish to avoid excessive fighting since they cannot be housed together in a smaller tank. Your betta sorority may get more aggressive if you don’t provide adequate tank conditions for them. A weekly water change is also included in this.

Make sure your betta fish are getting enough to eat

It’s possible that your betta fish are nibbling each other’s tails, or behaving more aggressively than normal, while they’re hungry. A daily mix of fish food, either dry, frozen, or freeze-dried, is best for your betta if you want it to thrive. In addition, there are some people who choose to fast their fish once a week in an effort to enhance digestion, but this is completely optional.

Beware of the possibility of an aggressive atmosphere developing among the Betta Sorority, particularly if the fish are all young and the tank’s hierarchy is still being established. For the sorority tank, it is recommended that you should add a lot of real or artificial plants as well as a smattering of decorations that they can hide in if they need to.

Keep an eye on the betta sorority tank at all times

Any fish that is fighting or being bullied by another fish should be removed from the tank, so keep an eye out for any of these behaviors. Closely inspect the fish’s fins, color, and resting habits for signs of distress.

The addition of “filler fish” to the tank may be necessary if your betta sorority is known for being antagonistic with each other. “Filler fish” are little, fast-moving fish that will fill up any empty area in the tank. They’ll get along with most bettas. Harlequin rasboras, neon tetras, less colorful female guppies, ember tetras, etc. are some of the best possibilities. The sort of fish you use as a “filler fish” is entirely up to you and your sorority’s preferences.

Make sure you have a quarantine or hospital tank on-hand

This is a tank that is dedicated to the care of wounded or ill fish, as well as fish that are being bullied or who are bullying others in the tank. In the event of an emergency, having one of these tanks readily available is always a good idea.

Something You Should Notice Before Having A Multiple Betta Fish Tank

Video: How To Keep Many Betta Together Even Males!

Do female betta fish kill each other?

In general, female bettas are less aggressive than males, and they may coexist peacefully. However, fights between females do occur on occasion. During the establishment of the betta sorority’s pecking order, there may be some fighting among the fish.
There’s nothing wrong with a betta battle to the death, but it’s a rare occasion for two females to do so.

Is it possible for a female betta to kill a male betta?

There might be some fighting between male and female bettas before and during spawning, but they’ll usually get along just fine.
It’s rare, but not impossible, that a female betta will attack and kill a male, particularly if the female is robust, healthy, and fully developed while the male is a little juvenile.

Can a male and female betta fish live together?

They can, but it’s not without danger. If you want to keep even one male and one female, your tank will have to be quite large. It’s possible that the fish will get too stressed. Maybe you’d be better off leaving it to the experts?

In the event that you wished to add multiple female bettas to your tank, you should be able to do it without experiencing too many difficulties. Despite the fact that female betta fish lack the stunning appearance of their male counterparts, they may still be attractive fish that give interest to the top portion of the water column.

Betta fish have their own personalities, and some are more prone to aggression than others. After a dominant fish exerts her power over the more submissive one, the situation usually calms down.

You may assist in maintaining harmony in the tank by many ways as I mentioned above. Hope my article will help you and thanks for reading.