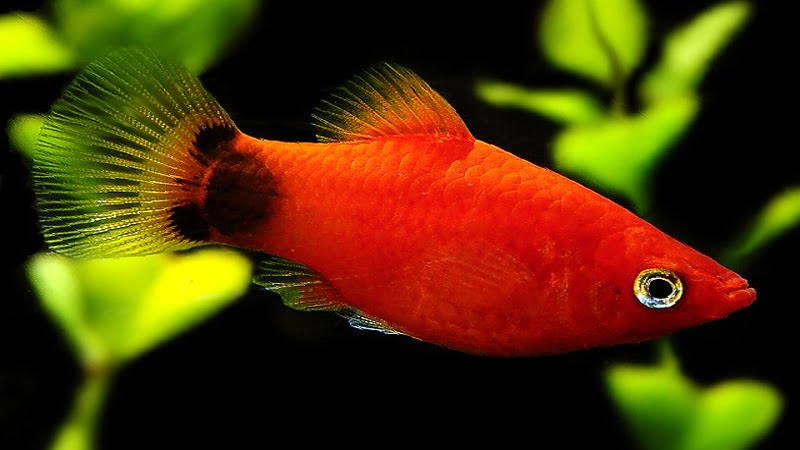 Are you drawn to the Mickey Mouse Platy fish, which is known for having a “hidden Mickey” design near its tail? Its outstanding hue that follows in waves is undoubtedly a lively performance.

Mickey Mouse, also known as the golden moon platy or moonfish, costs between $2 and $4. Sure, Mickey Mouse platy is an excellent choice for an easy-to-maintain freshwater fish that also doubles as a conversation piece.

It’s a livebearer that includes Guppies, Mollies, and other creatures. As a result, it’s not difficult to understand why people frequently misunderstand, and it’s difficult to determine which type of livebearer Mickey Mouse fish is.

There are two kinds of livebearers: viviparous and ovoviviparous. Mickey Mouse is ovoviviparous, which means that its eggs develop and hatch within the female prior to birth. I’m sure that fish keepers of all ages are sure to be fascinated by the arrival of the little fry.

This platy is found in North and Central America, from Mexico’s Ciudad Veracruz to northern Belize in Central America. It is not thought to be endangered. Non-native people now live in a lot of places in the United States, like California, Colorado, Florida, Hawaii, Louisiana, Montana, Nevada, and Texas.

It is called Xiphophorus maculatus in its scientific name. Orange and black make up the original. There are some fins on it, but it isn’t very big. To make beautiful colorations in the lab, you can use this kind of animal. A smaller male was also achieved during this process.

Male platyfish are about 4 cm long, and female platyfish is about 6 cm long. Even though they’re a little big, they don’t get along with other fish very well, which is why they like to live in the upper parts of the fish tank.

There are two to five platyfish that live for two to five years. In general, if the aquarium, its elements, PH, and temperature aren’t looked after, it can last less time. They also need to eat well so that they can grow well and have healthy babies.

You can call it golden moon platy or moonfish, but why “Micky Mouse Platy” is the most famous name above all? The reason is a “hidden Mickey” can be found in the tail area of this cute fish. At the base of the tail, there is a large round black spot with two small round “ears” on top of it. This makes it look just like Mickey Mouse, a popular Disney character.

As for the fish, it could be pale yellow or gold or even blue. The fins can be yellow, red, or black. There are also long- and high-finned types. It doesn’t matter what kind of fish each one is, even though they look different.

There are a lot of different kinds of fish that live with the Mickey Mouse Platy fish. They are very peaceful and get along with each other. To be able to move, they don’t need a lot of space. Small tanks, on the other hand, are very comfortable places to live.

Xiphophorus platies, on the other hand, often prefer to be with other platies from the same genus as Mickey Mouse. These are all fish that give birth to live babies, like guppies, mollies, and swordtails. Angels, catfish, danios, gouramis, and tetras are also good tankmates.

The differences in gender

As a new aquarium owner, the Mickey Mouse platy is an ideal choice. Like other platys, Mickey Mouse can live in a wide range of conditions. Even small aquariums can be home to this fish. Keep that in mind if you have live plants. The best substrate for this fish is small to medium-sized and dark in color. This contrasts well with the fish’s bright colors and makes them stand out even more, making them look even more beautiful.

Water conditions aren’t very important. If you want to drink alkaline water that isn’t too hard, most city tap water is a good match. As long as you keep the temperature of a typical community tank, such as 76 to 78 F, the temperature of the Mickey Mouse platy will work out just fine. During the summer, you might want to think about getting an aquarium heater.

However, various mickey mouse platy are used to living in cooler water, so they don’t need to be heated up when they’re kept at room temperature.

Mickey Mouse Platy’s Diet And How To Feed Him

They eat live food, like bugs and worms, as well as plants in the wild. Then again, they aren’t very picky about what they eat. They’ll eat flake, freeze-dried, frozen, and live foods. If you’re going to eat live food, things like brine shrimp and glass bugs are good additions. Foods that are frozen or freeze-dried are a good alternative to the same foods that you eat.

A well-balanced diet that includes a lot of vegetable matter is good for your health. Fresh vegetables like lettuce, spinach, cooked peas, and zucchini will be very welcome. You can also try spirulina instead of fresh vegetables.

This fish, like other livebearers, is sexually mature at 4 months old, hence juvenile fish should be sexed and separated as soon as possible. Females who mate keep sperm packets and can give birth for months without mating.

After mating and fertilization, the fry hatch in around 30 days. Warmer water speeds up the process. A typical brood has 40-60 free-swimming fry.

The female’s tummy grows as the fry grows. Eventually, the mother’s distended belly reveals the fry’s eyes. As the birthing moment approaches, prepare to house and safeguard the fry. If not, the parents and other fish in the aquarium will consume them all.

One method is to trap the female soon before birth. The fry falls through slits too small for the mother to follow. The disadvantage is that the mother is forced to reposition the little trap well before giving delivery.

The best technique is to have a separate birthing/nursery tank with lots of fine-leaved plants. The little fry hides amid the foliage. The mother is removed once her fry has all been born.

The fry is a completely formed baby fish. Initially, they require good cuisine. If you can’t find brine shrimp, liquid or powdered fry food will do. Daily feedings cause material buildup in the tank, necessitating daily water changes.

It’s very important for these fish to get used to the water in their new home. This should never be done quickly. A new tank should have its lights turned off for at least the first 4 hours of a fish’s life, and it should not be fed for the first 24 hours. There are two ways to get used to living in a new place: floating and the drip method.

Then, 14 cups of aquarium water should be added to the bag every 4 minutes until the bag is full. Half of the water in the bag should then be thrown away, and the bag should be put to float again. After that, the Discus can be moved into the aquarium, which is where they live.

In order to control the flow of air, several loose knots should be tied in the tubing of the air pump, like this: Putting your finger at the end of the airline tube that goes to the bucket and sucking it will start a siphon. The flow should be kept at 2 to 4 drips per second. It’s important to throw away half of the water in the buckets when it doubles. Then, the process should be repeated until the water in the buckets doubles again. When everything is done, the fish can be moved into the fish tank.

No, it isn’t. As I mentioned before, a livebearer that includes Guppies, Mollies, and others. Mickey Mouse Platy also belongs to livebearer, but it isn’t the same with Molly and Guppy.

What is the difference between Molly and platy fish?

Mollies have a sleeker appearance than Platies, and their mouths face upwards.
They have varied tank requirements, food, and ways of producing fry as well. Mollies, on the other hand, are slightly larger and more aggressive than Platies.

Can a platy live with a Betta?

Your betta should be OK living with platies in most circumstances. It all boils down to how aggressive your betta is, and that’s something you have no control over. Platies can be an excellent alternative for your betta if you believe that he or she has the correct personality.