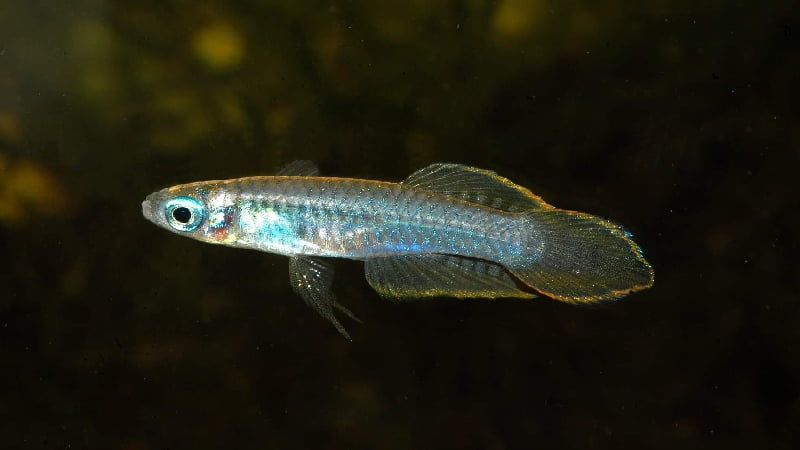 Lampeye killifish with shrimp is popular in the aquarium trade because of its colorful, striking patterns. These fish make great additions to any saltwater aquarium and can be pretty entertaining to watch as they hunt down small prey. Some people want to let the shrimp become their tank mates, but it’s essential to do a little research first before getting your hands on buying. Keep reading and learn more!

There’s no better fish for a nano or planted aquarium than the Norman’s Lampeye Killifish. Killifish is a great choice for both novices and specialists because of its hardiness.

In Norman’s Lampeye Killifish’s natural habitat, it is nearly entirely found at the very top of the water column. You must maintain it in an aquarium with a tight-fitting cover or at least a slightly lower water level since they are not scared to leap. Although they will not eat or disturb the plants, they will enjoy the shelter provided by floating plants, mainly if surrounded by water.

Unlike most Killifishes, Norman’s Lampeye Killifish seem to thrive in groups, where they exhibit their best coloration. House them in groups of between ten and fifteen individuals to feel most secure.

This species of Lampeye Killifish has a slender, elongated body, a round dorsal fin located at the back half of its body, and smooth scales. They have a flattened top, no barbels, and their mouth is at the tip. This Killifish has creamy, pale bodies that, depending on the lighting, have a pale greenish-yellowish-blue hue. A horizontal crescent appears on the top of these fish’s eyes and seems to glow blue under aquarium lighting.

Shrimps have become an aquarium staple in recent years, and people see first-hand the benefits of these crustaceans. As shrimp come in a variety of colors and personalities, it’s a good idea to include a few of these fun characters in your aquarium.

A shrimp species called an aquarium shrimp is any of several types, including caridina and neocaridina. A variety of aquariums are available for keeping crustaceans as well as adding them to other aquariums for color and character.

Species of shrimp, like other creatures, will not come out in the open in broad daylight. Some people overlook the usefulness of these shrimp since they prefer to hide while the sun is shining and only come out to play when the lights go out.

Peppermint shrimp, for example, are known for their love of eating anemones, which may be harmful to aquariums if left unchecked.

Otherwise, they’ll remain in caves and cracks all night, waiting for you to fall asleep so they can come out for a meal.

Can You Keep Lampeye Killifish With Shrimp?

Lampeye killifish is a type of fish found in the wild or in aquariums. They can be kept with shrimp because they share the same diet and habitat. The shrimp help keep the tank clean by eating the excess food and waste, while the killifish is a very hardy fish that can withstand the shrimp’s feeding.

The Caring Guide For Lampeye Killifish And Shrimp

Start by preparing your tank. Purchasing panchax from the market means you’ll need to get your water tested first. When it comes to water conditions and variations, these small fish are quite sensitive. Ammonia and nitrites must be removed from the water.

Before introducing a lampeye fish to your home aquarium, the first thing you need to do is to mature the tank. To keep your fish happy and healthy, you’ll need high-quality water in your thickly planted tank.

Make careful you adhere to these parameters to preserve the quality of the water:

Dwarf freshwater shrimp water needs vary per species. However, ammonia, nitrites, and nitrates should always stay below ten parts per million (ppm). If extremes are avoided, ghost shrimp, like the Amano and bamboo shrimp, may be maintained in dechlorinated tap water.

Tiny lampeye buddies aren’t too picky about their food. Every single thing you add to their tank, they will take, and they will appreciate it.

Tropical fish flake is the expert’s recommendation. If you want, you can mix the diets with live or frozen foods as routine treats, like brine shrimp, cyclops, mini bloodworms, and mosquito larvae. Regardless, their diets need healthy variations. Make sure they’re eating only high-quality stuff to keep them healthy.

The shrimp that dwell in freshwater ponds most often consume algae, but they will accept practically anything they offer. When you don’t feed your fish one day a week, your fish will benefit from getting their digestive system clean. This will also encourage your fish to clean their aquariums more often.

Norma Lampeye Killifish are relatively easy to breed, and they often produce small quantities of fry in a densely planted aquarium. For raising the yield of fry, you will have to set up a separate breeding tank.

Adding an air-driven sponge filter and filling the breeding tank with water from the main aquarium will ensure the breeding tank’s success. In addition to a small heater, the fish will also require several large clumps of Java Moss and spawning mops.

Ideally, you should acclimate a small group of fish from the breeding tank that has been fed live and frozen foods for a short period of time, such as one male with two or three females. In that case, spawning should happen quite quickly and without too much intervention. Nevertheless, a slight change in the water can sometimes promote spawning.

Success in raising captive-bred miniature freshwater shrimp varies from species to species. Without the aquarist’s help, some Neocaridina, like red cherry shrimp, may swiftly grow into vast colonies. Amano shrimp, for example, is virtually impossible to produce since they require brackish water to thrive. Before doing any breeding, it is crucial to conduct research.

Can Lampeye Killifish Live With Other Types Of Fish?

The short answer to the question above is yes, Lampeye killifish can live with other types of fish. But, not just any kind of fish will do. Lampeye killifish are tiny fish, and they do best in aquariums of 10 gallons or more. As you can imagine, they are pretty vulnerable to attack from other fish. However, they can live with larger fish if they are kept in a fish tank with many hiding places.

Cardinal Tetra is vibrantly colorful. They feature a vibrant blue top and a vibrant red bottom. They are relatively resilient, simple to care for, and calm fish. They love to swim in the tank’s middle to upper levels.

While most catfish get along well with Killifish, Plecos and other slow species are scarcely appealing. Rather than functional, I favor the crazy, perpetually active Corydoras!

These indigenous peoples of South America want to be kept in groups of their own kind; the more, the merrier! Corydoras roll their eyes, sprint to the surface for air gulps, and busily probe through the substrate in search of missing flakes, insects, and other delights.

Cories do not always receive their due while battling with Killies and other active sorts on the surface. You’ll need to feed them a high-protein sinking pellet diet. Additionally, Corydoras are quiet and easy to procreate, mainly when housed in planted aquaria.

The Dwarf Rasbora has a thin, long-form covered in semi-transparent scales on its head and surrounding the gill plate. Larger dazzling eyes also occupy their tiny heads. However, the brilliant emerald green hue on its strong stripes sets this fish apart from the rest.

However, don’t be shocked if you see fish with blue stripes, as the hue of these magnificent stripes varies. The deep green tone contrasts nicely with the body color, often coral pink or orange.

Known as Galaxy Rasboras, Celestial Pearl Danios may appear in mythology. These peaceful, small fish are good tank mates for your Killifish because they are peaceful fish of small size. Usually, they live for 3 to 5 years. They enjoy moving along the lower parts of the tank constantly.

Are killifish attracted to cherry shrimp?

It will be a pleasant little snack for them. Killies simply adore shrimp.

Clown Killifish are too small to consume the majority of shrimp; however, they will consume shrimp eggs and small fries. Including shrimp in your community setup is an excellent method to help maintain the tank clean and neat, and they are unaffected by the Killifish.

The shrimp may not possess the necessary tools to damage the eggs, and they may even keep them clean, but given that they can eat frozen bloodworms, it is probably better to take precautions than regret it later.

If you own a tank with shrimp, you may want to consider adding a killifish. This fish is not only a great tank mate for shrimp, but it is helpful in controlling the population of mosquito larvae and other microorganisms in your water. For more information on what to consider when adding a killifish to your tank, check out our infographic below.