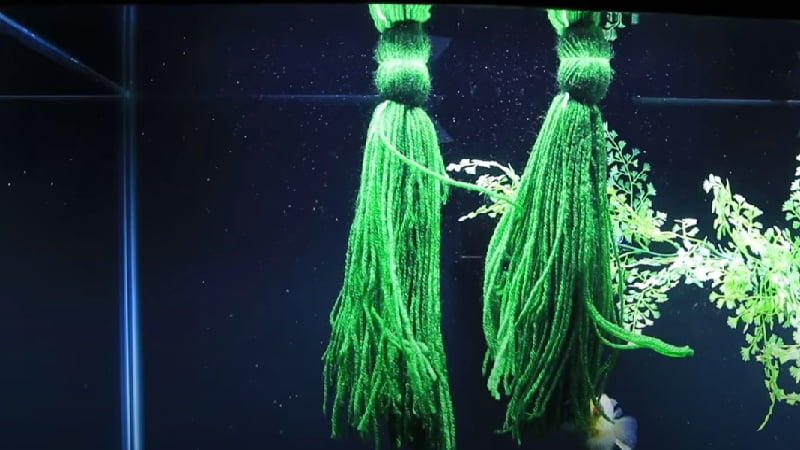 If you are planning to breed fish, you need to keep in mind your aquarium size and the number of fish you want to produce. If your aquarium is small and you are planning to breed a large number of fish, you will have to keep them in a spawning mop. A mop is a sort of funnel that can be used to move the eggs from one place to another. Today, we will be looking at the Killifish spawning mop and why it can be a good option for you.

What Is A Killifish Spawning Mop?

In fact, yarn mops are popular as spawning sites for Killifish with adhesive eggs, so the practice of placing “Killie mops” in the aquarium is quite common. In addition, a benefit of letting your fish spawn among plants or on aquarium glass instead of a spawning mop is that you can move the eggs to a separate aquarium for rearing.

Killifish mop heads are easy to clean, reusable, and can be repeated many times. You can even boil them if you choose the right yarn type in order to prevent microorganisms from transmitting between aquariums. Killifish mop sites are not only excellent spawning sites, and they act as shelters for harassed fish in order to reduce their stress level of the fish.

While most breeders of Killifish use dark yarn for their spawning sites, the color of the spawning site won’t matter much to the fish. Most breeders use dark colors because they make it easier to find the eggs once they’ve spawned. Popular aquarium colors include green, brown, and blue colors since they blend in well with the surroundings. Remove any dye traces from the yarn by boiling and rinsing it before use.

Why Use A Fish Spawning Mop?

An aquarium spawning mop mimics nature’s utilization of bushy aquatic vegetation. As a result, breeding pairs and their offspring benefit from the same impacts as a plant would.

The mop ends are where a breeding couple of fish will place their eggs. At the same time, their parents may perceive them as a possible food source when the eggs hatch. The fry will have a safe place to hide when they are born.

The parents can’t get through the bristles fast enough to grab the fry if the spawning mop is kept in the main aquarium.

The Killifish spawning mop is a perfect tool for anyone who wants to spawn fish in their aquarium. It is easy to make and requires only a few materials. Let’s discover how to do this now!

What you need to prepare:

You need a skein of dark acrylic yarn for this project. While the exact color doesn’t matter to your fish, a dark yarn will help you determine that the eggs have been laid.

You can destroy harmful microorganisms by placing the yarn in boiling water for a few minutes. Your yarn must be able to tolerate this. A water bath and careful rinsing afterward will also remove the dye residue. Additionally, if a skein is well soaked, it will sink rather than float.

I would recommend using a hardcover book whose length is approximately equal to the height of the aquarium in which your spawning mop is intended to be used. You can start by winding a small strand of yarn around the width of your book to make a border and then wind the rest around the length.

With scissors, cut the yarn carefully in the middle of the book to form a mop. Next, tie another strand of yarn around the top of the spawning mop.

Tips! You can tie a piece of cork to your spawning mop if you want it to float around the aquarium.

Step 1: You’ll have to bring acrylic yarn, a book, and scissors.

Step 2: Make sure you don’t forget where you started by placing the beginning of the sting within the book (just beneath the cover).

Step 3: Draw a circle around the book a few times and begin counting.

Step 5: Cut the thread attaching the book to the yarn, then cut a 5″ length of yarn. Then bring it to the other side of your mop’s beginning and tie a knot as tight as you can.

Step 6: Remove it from the book and hold it in both hands. Take the knife and cut it straight in the opposite direction of where you tied your knot.

Step 7: Make a ball shape by tying a knot on the top (opposite side of the cut end) and going around it. Don’t tie the knot too tightly since the killies prefer to put their eggs in there.

Step 9: Let the dye drain out of the Killie mop by soaking for about 20 minutes. If some dye gets into your aquarium, it is perfectly fine.

What Is The Proper Way To Use A Spawning Mop?

A spawning mop is necessary for any killifish keeper who wants to breed their own Killifish successfully. But what is the right way to use one? This section will go over everything you need to know about using a spawning mop.

Spawning Mop Floating in the Water

Just set the top of the floating Spawning Mop in an aquarium with the yarn dangling below, and you’re done. In the spawning mop, egg dispersing fish like tetras, Danios, Rasboras Rainbowfish, Corydoras catfish (and many others) swim in and lay their eggs.

Spawning Mop with a Sunken Base

The purpose of a sinking or sunken Spawning Mop is the same as a floating one; however, you need to sink the mop at the bottom of your aquarium.

The fish that scatter eggs most often inhabit the lower part of the tank, such as Corydoras catfish, which will swim into the spawning mop and deposit their eggs.

Sunken spawning mops can protect young eggs from predators because any eggs that don’t stick to the mop’s woolen strands can fall into crevasses between them.

Mops work better because of their larger surface area to catch eggs, but most importantly, you can wash or soak them to keep them clean and sterile. Afterward, you can dry and store them.

What are spawning mops made of?

Mops are traditionally made of wool, but synthetic or natural yarn may suffice — just as your grandmother knits with. The fibers are ideal for egg-catching, and the wool is gentle on the fish’s body.

What fish use spawning mop?

Many fishing species, such as tetras, Danios, Rasboras Rainbowfish, Corydoras Catfish (and many others), will lay their eggs inside the spawning mop.

Can I buy spawning online?

Definitely, yes. You can buy it on some famous online websites such as eBay.

In conclusion, a spawning mop is a great option for those who want to keep their fish happy and healthy. It is easy to use and makes cleaning much easier. Get one for your home and see the benefits for yourself!