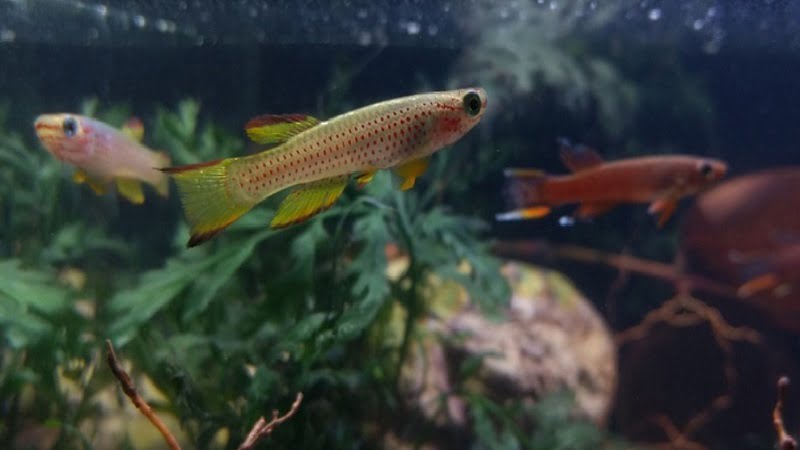 For instance, according to the information above, for instance, the ‘kil’ root in the word ‘killifish’ means ‘small stream’, which implies the habitat of fish. Actually, the most killifish species can be found in shallow water and small streams. Another example is the scientific name of the northern plains killifish, Fundulus kansae. The term “Fundulus” comes from the Latin word ‘fundus’, which means ‘bottom’, to indicate ‘the habitat’. Meanwhile, the word ‘kansae’ implies the type locality.

There are a variety of common names for Killifish species, so other aquarists may find it difficult to understand what you are referring to if you use a local name or a term that is commonly used in your country. Besides, just a small percentage of the Killifish enthusiasts in the world can identify and distinguish the killifish type if the common names are used. This means it may be difficult to sell, purchase, or obtain advice about specific species. Therefore, by using the killifish scientific name, you can reach a broader audience.

In addition, common names can be shared by several different fish species, which makes it even more difficult to use them. In other words, it is possible to use the name “YYY Killifish” for species A, B, and C at the same time. This can naturally cause confusion and can also result in serious misunderstandings. By using the killifish scientific name, it is easy and apparent to recognize which species you are referring to.

Understanding the hierarchy and relationship

Understanding how to interpret a scientific name can give you essential and useful information. A scientific name usually consists of two parts, one showing the genus and the other giving you an idea of the species’ identification within the genus.

Let’s look at the scientific name Aphyosemion cinnamomeum of the Cinnanmon Killifish, a stunning African species that is kept by many Killifish aficionados. The first part of the name, “Aphyosemion”, shows the genus of the killifish which is genus Aphyosemion. Meanwhile, the second part, “cinnamomeum”, helps you differentiate this species from the other species in the same genus, such as Aphyosemion australe (Lyretail killifish) and Aphyosemion filamentosum (Plumed lyretail). The name meaning of this “Aphyosemion cinnamomeum” name is “Cinnamon coloration of the body”.

There are close relationships between species of killifish belonging to the same genus. For aquarists, knowing this is valuable, since closely related species tend to be similar in anatomy, as well as in requirements and behavior. For example, you have got a new killifish but cannot find any information about how to get their breeding. In this case, you can search for this information of the same genus, and then, you can do experiments based on these findings. It may not get right every time, but your chances could increase significantly. Still, the species in a genus have considerable natural differences, and these can be used for classification.

Besides, when knowing the killifish scientific name, you can explore the relationship between the species and other living creatures in the world.

Let’s take a look at another killifish scientific name: Nothobranchius rachovii, which is commonly known as “bluefin notho” – an annual killifish species.

‘Nothobranchius’ is the genus of the fish, which is derived from the two Greek words: “nothos” = false, spurious, and “bránchia” = gill. The second word of the name, ‘rachovii’, is named in honor of Arthur Rachow, which can be used to distinguish it from the other species within the genus.

Nothobranchius rachovii has a taxonomy, or scientific classification, as follows.

Other elements of killifish names

Apart from the two-part name, many killifish species have their scientific names assigned one or a few additional words and a number. As a result, the killifish scientific name can be quite long and more complicated, than other fish’s names.

When visiting the killifish auction sites, you can come across the name like “Nothobranchius rachovii Beira 98”. As demonstrated above, we have already known what Nothobranchius rachovii indicates, yet there is no hint about “Beira 98”. Though “Beira 98” may give a cryptic sense, it is just a collection code. Specifically, the Beira 98 indicates the location where this species was acquired; it is near the African village named Beira in the year 1998.

Is it always easy to understand a killifish scientific name?

The answer to this question is unfortunately no. Occasionally, a fish species will be known by more than one scientific name, owing to the different descriptions from different explorers. For example, in 1915, Explorer Anderson saw a killifish in an African puddle, described it, and named it Nothobranchius andersonius. Another explorer travels to the same puddle in 1920, finds the same species, describes it, and names it Nothobranchius victorii after his wife Victoria. As you can see, these two names indicate a single killifish.

Scientific names are also problematic as the taxonomy (the way species are classified) is continually changing. In some cases, DNA tests may reveal that a fish thought to be a Nothobranchius is actually more closely related to a Killifish originating from another African genus. When the fish is transferred to the correct genera, its scientific name will be changed. However, the old name can still remain among aquarists for years until they get a significant announcement about the taxonomic change.

Owing to these reasons, in the posts about killifish, it is common to include the common name, the current scientific name, and synonyms as well. For example:

Video: Killifishes And Their Scientific Names

Killifish and guppies are not the same. Actually, they are actually quite different breeds that have more significant differences.

WHAT IS THE SCIENTIFIC NAME FOR MUMMICHOG?

Mummichog killifish scientific name is Fundulus heteroclitus. They are a small killifish species that can be found along the Atlantic coast of North America.

their heads behind the eyes, and small distinctively shaped, upturned mouths. Also, their dorsal fin is soft, and the tail is square or rounded.

Understanding the scientific name of a killifish species can give you great insights into these fish, such as their family, genus, and connection with other animal species. Due to the taxonomy that is continuously changing, it may get complicated and confusing to recognize a specific killifish scientific name. I hope that this article provides sufficient information to help you know how to examine and understand the scientific name of your killifish.