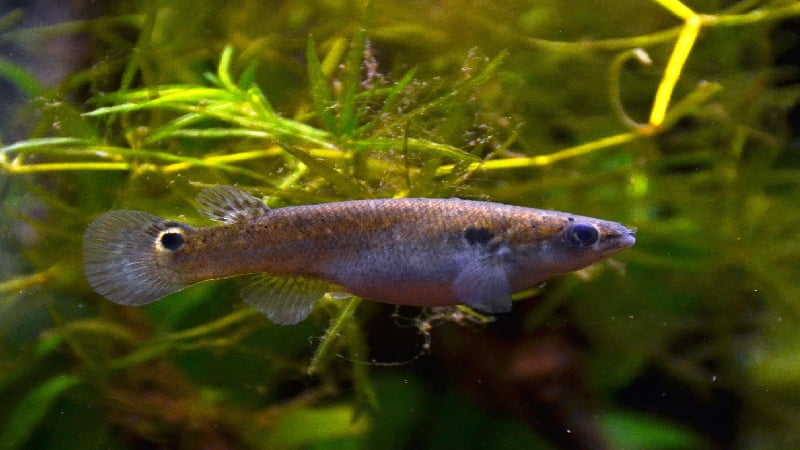 A killifish planted tank is a freshwater aquarium that is designed to sustain plant and animal life. While the plants in the tank provide food and shelter for the fish, the fish keep the plants alive by eating algae and other pests. This type of setup is not only aesthetically pleasing but is also beneficial for the environment. Let’s scroll down and discover which plants will fit your aquarium!

Killifish, which belong to the family Cyprinodontiformes, are among more than 1,250 species that make up the family. This family is divided into ten different subgroups based on the species.

A killifish belongs to one of the world’s largest and most diverse fish families. In almost all continents across the globe, except for Australia and Antarctica, they have adapted to live in a wide range of habitats.

A lot of killifish live in shallow waters in subtropics and tropics. They are primarily freshwater fish that live in still and moving waters. The only exception to this is a few species that occur in brackish and saltwater.

Usually, killifish only live for a few months in their natural environment. Though the term killifish is perceived as being potentially dangerous, killifish did not adopt this moniker because of its danger. “Killy” originates from the Dutch word for the ditch, which means a channel or a ditch. Many of the killifish species are only one or two inches long, though some of the larger ones can grow up to six inches long.

Are you considering a killifish planted tank for your next aquarium? If so, it’s essential to know the advantages and disadvantages of this type of setup. Killifish are beautiful fish that come in a variety of colors and patterns. They are also relatively easy to care for, making them suitable for beginner aquarists. However, there are some things to consider before setting up a killifish planted tank.

Plants create an aesthetically pleasing show, give protection for fry and timid fish, and serve as colonies for denitrifying bacteria. Additionally, plants maintain populations of infusoria; fry may be reared in modest numbers without feeding in a well-planted tank. They can help fish feel safer in a tank with a bare bottom.

Additionally, plants help disguise the ugly filters and spawning containers seen in many killifish aquariums. In a well-planted aquarium, adult plant spawning killies may reproduce pretty quickly. The number of fries can be raised by removing the parents and/or feeding freshly born artemia on a regular basis.

Certain species of plants become more aggressive when exposed to light. Additionally, they form boundaries which can increase aggression. The presence of plants may introduce snails, hydra, and other undesirable organisms into the ecosystem. Their abundance can conceal dead fish or uneaten food, reducing the level of tank hygiene. Plant spawners may lay their eggs on plants, but these are much more difficult to collect than eggs laid on spawning mop wool.

For long-term breeding, decorate the tanks with a few plants with a couple or trio of fish, but be careful not to use too many plants that choke the lighting.

Whenever possible, avoid growing plants on a large batch of fry. The best tank in these cases is a dim one that has no apparent territories because it will reduce aggression, and if an individual is outgrowing their tankmates (and eating them), it will be more obvious.

Species Of Plants That Grow Best In Killifish Aquariums

Many people do not realize that killifish can actually be a great aquarium plant. Killifishes have a wide range of pH levels and water temperatures that make them compatible with a variety of aquariums.

In dim tanks with no intense lighting, killifish often thrive. In the wild, killies live in a mountainous rainforest characterized by shaded streams, murky ponds, and choked marshes. A further limitation of keeping killifish in breeding tanks is the absence of substrate, so root-reliant species cannot be used.

Epiphytes can either be anchored to rocks or wood or let float freely in the tank during the growth process. Typically, these species can withstand low light levels and are excellent for softly lit tanks.

Plant spawning fish use Java moss as a spawning substrate and as a refuge for fry. It provides cover and is a vital source of infusoria. Regardless of whether it is in or out of the water, this plant grows quickly and can attach itself to rocks and wood. Even aquariums’ glass backs have been successfully mounted with it.

The African water fern thrives well while attached to rocks and wood, which is very similar to the Java Fern. Although Bolbitis prefers a bit of water flow and does better in tanks with filters that are directed towards it, some water flow is necessary. Another propagation technique is rhizome separation. It grows pretty slowly.

Smaller kinds of Anubias are ideal for keeping killifish in an aquarium. They can grow in low light and are commonly adhered to rocks and wood. It is a slow-growing plant that is expensive to acquire. Thus it is only used as an aesthetic feature in the killifish aquarium.

The organisms that float around the aquarium (often near the surface) typically grow very quickly, making them great for absorbing nutrients from the environment. However, these plants form dense clumps that provide plenty of shade for the tank below, despite requiring light.

It’s common to see Hornwort advertised as a “cold water plant,” but it’s actually a fantastic houseplant. The needle-like leaves will become considerably finer when the plant is brought indoors. The plant itself floats freely and develops at a blistering rate. Long-term breeding setups benefit greatly from Hornwort, although species like Anubias on the aquarium bottom may suffer if the plant isn’t thinned out regularly.

There is no limit to how much Hornwort may grow. The length of some strands can exceed tens of feet. The presence of unwanted algae, predatory insect larvae, or snails in hornwort should be taken into consideration while bringing it indoors.

The foliage of Ceratopteris can differ depending on the plant’s position, which can either be grown as a planted plant or a free-floating one. Some tank conditions may not suit it, as it prefers softer water. The plant grows rapidly and forms dense clumps; most killifish keepers will use it as a floating plant; the roots trail down and shade the tank.

The Najas genus includes over 40 species, many of which can be kept in aquariums. Using Najas in an aquarium would be similar to using hornwort. It floats mid and top levels of the tank. In comparison to Hornwort, it is thinner and breaks apart more easily, so new strands grow from it. This plant is more manageable than Hornwort, and it has an attractive appearance.

The majority of killifish are carnivores. They consume crustaceans, insect larvae, and worms in their natural habitats. Some species consume algae as well.

What size tank does a killifish need?

Because of their tiny size, many killifish is ideal for nano and desktop aquariums. A trio may be kept in a 5 to 10-gallon aquarium for species tanks, but for community setups or if you wish to keep more than one male, a 20-gallon or bigger aquarium is advised.

You can provide plants with tangled filaments like Java Moss and Guppy Grass (Najas Guadalupensis). These plants will provide cover for young larvae in plant spawning Killifish, as the eggs are laid on these plants.

In conclusion, if you’re considering adding a killifish to your home aquarium, there are many reasons why you should make the jump. They are fascinating creatures with plenty of personalities and can be very entertaining to watch. Plus, they provide an excellent dietary source for small fish and invertebrates. So if you’re on the fence about getting one, go ahead and make the purchase – you won’t regret it!