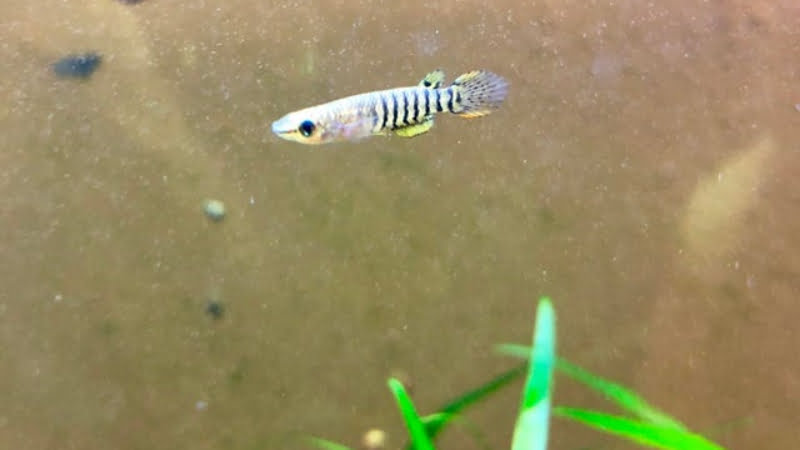 After the fish eggs have hatched, the path of breeding fish and rearing their offspring has just started. While it is possible to successfully breed parents and offspring, it is far more difficult (and time-consuming) to raise fry. And this brings us to an important question: what should be your killifish fry food?

Many of the ingredients used by aquarists to feed their fry are included in the following overview, which will assist you in keeping your fry alive. Despite the fact that each of these meals has sufficient nutrients to be consumed on its own, it is recommended that you combine a variety of foods while feeding your fry to assist satisfy their various appetites.

To feed young fry, this is a simple and cost-effective meal option. Unlike living cultures, this one doesn’t produce any unwanted odors.

Start by hardboiling an egg for the yolk preparation. And all you need to do is remove the shell and egg white. Shake a little portion of the egg briskly in a small container with water (the leftover yolk may be stored in a sealed container in the fridge). After agitating the water, the yolk may dissolve and you’ll have a suspended meal for your fry.

Sift the mixture with a towel if required to remove any bigger yolk chunks. The egg yolk solution is now ready to be added to the fish tank. Most young fish will devour it within a few minutes of seeing it in the water.

The yolk of a single egg may sustain a group of newborn guppies for months. Obviously, egg yolks aren’t going to survive that long in the fridge, so if you have any left over, throw it away. Additionally, excessive amounts of yolk or food in the aquarium might pollute the water.

One issue with egg yolk is that even the tiniest fry may have difficulty swallowing part of the suspended yolk. So, even if you’ve sifted through the food, some of the bits are still too big to be eaten and may be contaminated by the water.

Egg yolk powder is commonly available at pet shops and combined with a wide variety of additional ingredients to give vitamins and minerals that may enhance fish development.

This meal is ideal for little fish since it is so much smaller than any flakes you could possibly grind. Using powdered yolk instead of suspended egg yolk may be quite beneficial for feeding the tiniest killifish fry

Because they are already in water, these feeds are called “liquid fish foods”. Typically, the particles are too big to enter into the mouths of smaller fry, but there’s been a change toward smaller sizes. Many enthusiasts are eager to see how this new generation of liquid fry food performs. Although the early results were mixed, these new liquid meals may be utilized in lieu of existing tiny fry feeds since they are so little. Small fish may also consume them since they remain suspended for lengthy periods of time.

Flake food for fry has been on the market for a long time in the commercial sense. For larger fry of livebearers such as killifish and the majority of cichlids, fry flake feeds perform well. However, for smaller fry, they do not. Often, the dish is as big as the fries.

The live foods that fry consume include microworms, vinegar eels, infusoria and grindal worm (both green water and zooplankton).

Killifish fry love microworms as a first feeding source. It is cmmon to use a transparent glass container with a one pint capacity, such as the type of container used to sell food, to culture baby cereals. A paste is made by adding a little water to the mixture.

Next, some dry yeast is sprinkled over the paste ad the starter is added. Within a few days, you will be able to see microworms crawling up the sides of the containers. A finger or a small stick can be used to scrape them off and then feed them directly to the fry. It is likely that the culture will go sour after some time. At this time, it is best to start a new one and readjust them accordingly.

As a starter food for fry, these tiny worms are also ideal. Because of their indefinite ability to live in the water, they have the advantage of staying suspended for an extended period of time. Although their culture process is relatively simple, they are difficult to collect. It is recommended to use a jar as large as a one gallon pickle jar, almost full of a 50:50 mix of cider vinegar and water for the purpose of culture. Then, add some apple pieces, along with the starred culture.

Several days later, you can see thousands of tiny worms floating about in the vinegar. They will continue to grow without any attention for several months. In addition, it is necessary to strain and rinse the worms many times to eliminate the vinegar that would otherwise acidify the hatch water before feeding them.

The term Infusoria refers collectively to a massive number of small organisms that live in naturally conditioned water and thrive there. Those organisms can be found in green water, for instance. In the case of newly hatched fry that are not yet big enough to eat the foods that have been described above, a culture of green water, or a culture of paramecium can be utilized. It is possible to obtain Paramecium starter cultures from biological suppliers, or through Bio-Chemicals and Environmental Laboratory.

Adding dried peas and baby cereal to water that has been filtered to eliminate chlorine is an easy way to keep a culture alive. And a one-gallon pickle jar is a good size for this, and it works well.

It just takes a few days for bacterial growth, and this causes the water to get cloudy. Afterwards, the paramecium starter is added into the mix. The paramecium population will grow over the course of several days. They may be observed in the water as small white “splinters.”

Every week or two, the culture is supplemented with a few dried peas. Some of the fat is removed with a baster and then added to the fry hatchery as food for the young. For the first week or two, the stench of Paramecium cultures may be fairly unpleasant. After that, they’re not as offensive. Since bacteria growth causes a “bad” smell, this author prefers to wait before using a culture. Besides, corn husks are also used by some home gardeners to cultivate paramecium.

Grindal worms are a great source of protein for young fish, or fry. Their culture is similar to that of white worms, however they prefer higher temperatures, with 70 degrees Fahrenheit being the optimal temperature. To cultivate them, create a bed of potting soil and peat moss in a 50:50 ratio (sterilized with microwaving and let cool).

By adding water, the mixture is properly moistened, but not completely saturated. A sprinkling of baby cereal is sprinkled over the top of the starter daily, and the worms are fed. And, in order to protect the culture, a piece of glass is placed on top of it and the box is covered with a lid. During the development of the culture, the worms congregate on the sheet of glass, and they can be scraped off with a finger to be fed.

Plastic foam (“sponge”) may be used as an alternate substrate for cultivating grindal worms. Foam often offered as a mattress pad called “egg crate” is a good option. In a plastic food storage container, a piece of this foam is inserted and water is poured until the foam is moist all the way through.

And then, baby cereal is sprinkled on top of the beginning culture before it is fed. The box’s lid is secured in place. In an ideal situation, the inner surface of the lid will merely brush up against the surface of the foam. Just enough food is supplied to the culture every day.

It won’t take long for worms to gather on the lid, where they may be harvested and fed to the fish. In comparison to traditional grindal worm cultures and white worm cultures, this approach has the benefit of causing minimal soil contamination and preventing the invasion of house mites. Video: Top 7 Foods for Fry (Baby Fish)

What is the proper frequency of feeding killifish fry?

The majority of fish fry need feeding between 2 and 4 times per day. As a result, this holds true for Killifish fry as well.
During the first two days, I would recommend giving them microworms two to four times a day. After that, you can use baby brine shrimp instead.
You can also use a tiny, clean paintbrush so as to dip into the container of young brine shrimp and allow the food to adhere to the bristles of the brush. After that,  carefully swirl the paintbrush around in the water of the fish tank to drop the food into the tank. Additionally, make a habit of feeding your fry many times a day to keep them happy and healthy.

Where to get the food for your killifish fry

In pet shops that offer fish food, you may readily get live food for Killifish. However, if you don’t have access to this alternative, you may always purchase on the internet!
Fish food is a popular item on eBay and Amazon. In conclusion, if you’re seeking frozen live food, such as brine shrimps, daphnia, and bloodworms, go no further than the websites listed above.

Killifish are surely preyed upon by little fish. Their preference for little, properly sized fish allows them to ingest fish that are readily fit into their bodies as pollinators. To provide a well-balanced diet, they also consume eggs and fries.

When you have your brilliant Killies fry in your fish tank, it is only normal to be concerned about what to feed them and how to care for them properly. Furthermore, as previously noted, you may feed your Killies a variety of different types of fish food. Brine shrimp, mosquito larvae, Mysis shrimp, daphnia, bloodworms, and freshly born brine shrimp nauplii are all examples of what may be found in a brine shrimp colony.

When it comes to feeding your Killifish fry, you may start by giving them microworms and then progress to baby brine shrimp and then various foods such as mosquito larvae, daphnia, Tubifex worm, black worms, and white worms as their diet becomes more varied. Feeding them paste meals and fruit flies is another option.

So, armed with this comprehensive list of foods that you may feed your Killies, you will be prepared to provide the best possible care for your fish!