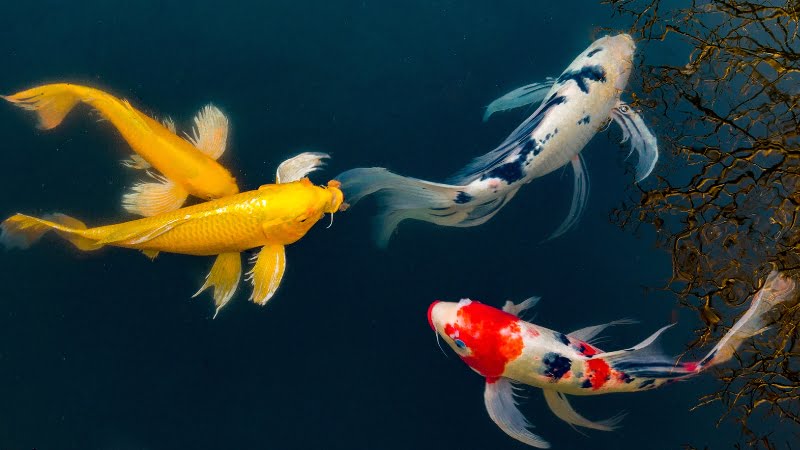 People are asking, “is koi fish lucky?” and my answer is yes, according to the Asian culture and primarily Japanese. This fish species is believed to bring not only luck but also other important values, such as peace and balance.

Furthermore, there is no doubt that koi fish are beautiful creatures. Any aquarium will have an elegant look if it has a koi in it. Explore with me three fun facts about the meaning of koi.

Is Koi Fish Lucky – Is It Fortunate To Keep Them?

According to the law of feng shui, keeping a koi close to us will bring good luck as well as spiritual advantages. Having a koi pond or a koi aquarium is beneficial for the wealth and luck of homeowners. Also, most Feng Shui practitioners agree that the number nine is the most “potent” number. So if you have an aquarium of 9 koi fish, the luck just doubles.

Koi are commonly regarded as a positive luck symbol or symbol of the happiness of a marriage as well. The shape of the koi and their eyes represent the Ying Yang relation, which bares the meaning of the balance aspect of life. Therefore, the koi fish is generally known for bringing luck, balance, and proliferation.

Given that the oi fish symbol is widely known in the spiritual world, aquarists that take an interest in how feng shui works will want a pair or more koi fish in their tanks. However, there isn’t any proof that affirms the lucky effect of this species. I think this can apply to how we perceive most figures and symbols. If you pay attention to the spiritual world, koi fish and numerous other breeds bear meanings.

The Image Of Koi Fish In Asian Cultures

We have already answered the question “is koi fish lucky”. But many might not know that koi fish even express power. In Asian cultures, men and women with power in the underworld pick particular creatures as figures for their tattoos.

Some pick tiger or dragon tattoos, but some pick koi or carp tattoos. In western culture, having a koi or carp tattoo represents perseverance. But in Asia, they express power status that the ordinary public can’t handle. Therefore, if you live in an Asian country, it’s best to avoid having a koi tattoo to avoid troubles or cultural appropriation.

What does koi fish symbolize?

Koi fish symbolize many things such as luck, balance, peace, perseverance, etc. Depending on the situation, aquarists can perceive the spiritual beauty of the species differently.

Is it forbidden to have a koi fish tattoo?

It’s not forbidden, but it should be avoided in Asia. In Asia, influential people in the underworld usually have a koi or carp tattoo alongside a dragon or tiger tattoo. Having such a tattoo tells about a person’s capability in the underworld. If you don’t belong to it, it’s advisable not to have a koi tattoo since this can attract attention, primarily painful ones.

Yes, people can eat koi fish and have eaten koi fish. However, koi are well-known for being a pet fish, so people tend to feel weird if they are offered to consume the breed. More importantly, koi fish’s meat contains high mercury concentrations that can act fatally in the long run.

Why are koi fish so popular?

Koi fish are well-known for their origin, which is from Japan. This fish species is highly expensive, and the appearance adds a lot to its value. Due to the high demand and requirements in the care of koi fish, only the most healthy and beautiful ones make it to the general market. This situation creates a shortage of koi fish supplies.