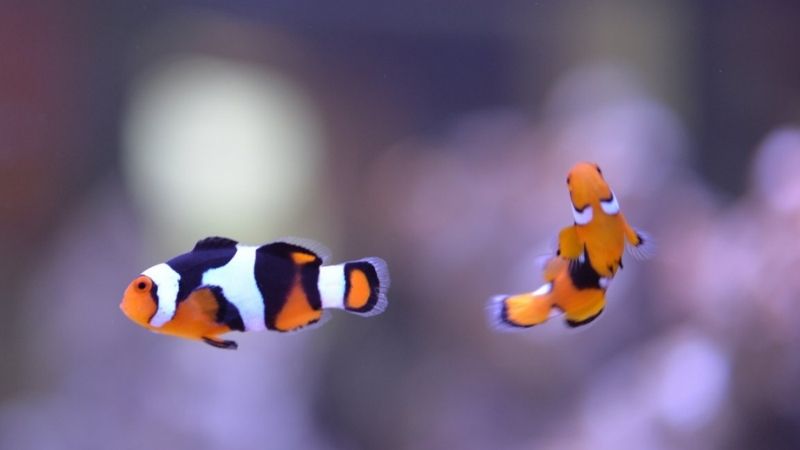 How Many Clownfish Can You Have In A Tank

One question many beginner aquarists have is how many clownfish should they keep in their tank. Some people will tell you that it’s cruel to hold a single fish captive and adding the joy of seeing others into the mix will make things more interesting for them, just like human beings.

Some would argue that the fewer clownfish you have in a tank, the less likely they are to get aggressive. Helping to manage your aquarium becomes easier and it is worth noting there is no need for another fish with more than two or three in a tank

The opinion is split, but it depends on what type of fish you have in your tank. Clownfish are a complicated species because they can change gender and establish hierarchy.

Clownfish can live in either one-on-one or pairs. Clownfish should not be introduced to each other and very rarely, but there is no reason to keep more than two per tank.

Clownfish are typically fawned by a group of males and one female. In most cases, you can only maintain this ratio in an aquarium facility.

Keeping groups of clownfish together is difficult due to how they behave. The male and female will establish dominance by bullying all the other members in the tank; this makes it hard to have a group of over two fish.

One of the benefits of this aggression is that it keeps subordinate fish small, which in turn prevents them from ever-growing more substantial or dominant. This eliminates the possibility of a subordinate male becoming a female.

If you introduce a female clownfish to an aquarium that already has a mating pair, the two females will fight and one is likely to die.

Owning more than one clownfish requires careful attention because of the higher risk associated with high populations. Two to three fish won’t stand a chance against bullying from dominant pairs.

Do clownfish need to be in pairs? No, they don’t. But it is the best way for them to live, short of keeping individual clownfish in a tank.

What Happens When A Clownfish Is Alone?

Clownfish choose their gender when they reach adulthood. At first, two clownfish will fight until the dominant one becomes female and the inferior one turns into a male.

However, if you have just one clownfish in a tank, it will often become either male or female. As there is no companion to suppress this course of action, gender won’t determine its behavior in any way. But since it is the only fish in the tank, its sex doesn’t matter.

Clownfish are schooling fish which means aggression between the mating pair keeps the subordinate males from becoming female. With only one clownfish, there is no dominant male to suppress these subordinates and without this suppressing force, nothing stops that single clownfish from becoming alpha female.

How To Control The Aggression Within Your Clownfish Tank?

It’s important to keep clownfish in pairs, but when both are females they tend to bully their mate. One way to control this behavior is through environmental management. Regardless of your situation, the following tips are bound to prove useful:

What are the rarest clownfish?

The McCulloch Clownfish is from the Lord Howe Island off the coast of Australia. It cannot be found in any other region, and as a result, it is one of the rarest Clownfish in the aquarium hobby. Brown to black with a white tail and head bar, the fish typically resembles a smudged across its face when young but grows

What is the lifespan of a clownfish?

There are only ten out of over 1,000 types of anemone that can house these fish. Most people put them in a tank with the wrong sea plant. In captivity, the clownfish can live for 3 to 5 years; in the wild, they live 6-10 years.

Are clownfish endangered in 2021?

We conclude that the orange clownfish is not currently at risk of extinction over all or a significant portion of its range and is unlikely to become so within the foreseeable future.

The average number of clownfish is two per tank. This is most preferable both for the aggression among the fish and for programming a partnership lifestyle. If you want to keep more than this, get either an especially large tank or a school of five.

I hope my article had answered your question on how many clownfish can you have in a tank. If you do not find the answer to be sufficient, feel free to contact me because I would like the opportunity to assist. Thank you for your time!